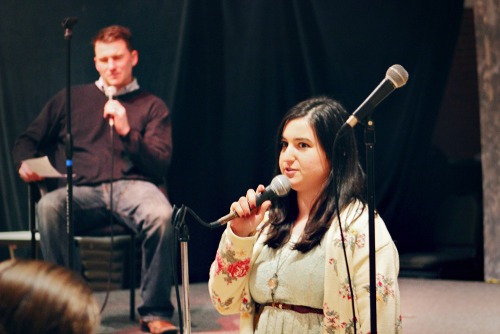 Female Comedians, Animation and the Future

‘I love the way you describe my work,’ Danielle Lauretano exclaims as we launch into our conversation about her work. I’d just finished watching her short animation Women in the Media: a thought process and it struck me with an irreverent feeling similar to stand-up comedy, and in particular females who pursue live comedy. For a short time we discuss the indie hit, Obvious Child which stars comedienne Jenny Slate. ‘I think there are unwritten, unjust, rules of what women can be funny about,’ says Lauretano. ‘It really bothers me. Take a chance, nothing should be out-of-bounds.’

This young animator definitely doesn’t subscribe to the supposed notions that affect comics, even the big names of the industry. Laurentano’s work, even beyond her exploration of the media, is dry, funny and it’s not going to be to everyone’s taste–but what art is?

Animation is a free art-form. I’ve always felt that this particular sub-genre of film has an ability to say, explore and question norms in a way that both documentary and narrative work can’t always achieve. Lauretano is exploring that theory with her work. Initially pursuing studies in graphic design, animation presented itself as a possible career path. ‘I didn’t think it was something I could do. That was achievable. But once I started, I couldn’t stop.’

Lauretano, a MASSart student, recently screened her thesis film Cathexis at the Boston Indie Mafia Hob Nob Social event at Arts at the Armory. ‘Explaining my work can be hard,’ she says, ‘I was channeling past experiences.’ Working in charcoal Lauretano created an intimate study of unhealthy obsession with this piece that demands several viewings. Boston Indie Mafia is a non-profit corporation whose primary mission is to promote the arts by creating visibility of and support for regional independent film professionals, creatives, and performers.

‘It can be lonely, working in animation but also the industry as a whole. The Hob Nob created an opportunity to meet other makers. It was a good forum to share my work,’ continues Lauretano. See an interview with Lauretano during the event for more behind Cathexis.

Lauretano has been working freelance, as well as finishing her studies. ‘I have a three year plan, but we’ll see how that goes,’ she says with a refreshingly casual approach to what will come upon graduation.

‘I’d like to move somewhere warmer,’ she concludes. I think that’s definitely a battle that most New England filmmakers struggle with when it gets to late March and there’s still snow on the ground. I hope Lauretano continues to call the region her home and I’ll be watching keenly for what this lady hits us with next.

You can learn more about Danielle Lauretano on her Tumblr, and her vimeo.

You can learn more about Danielle Lauretano on her Tumblr, and her vimeo.