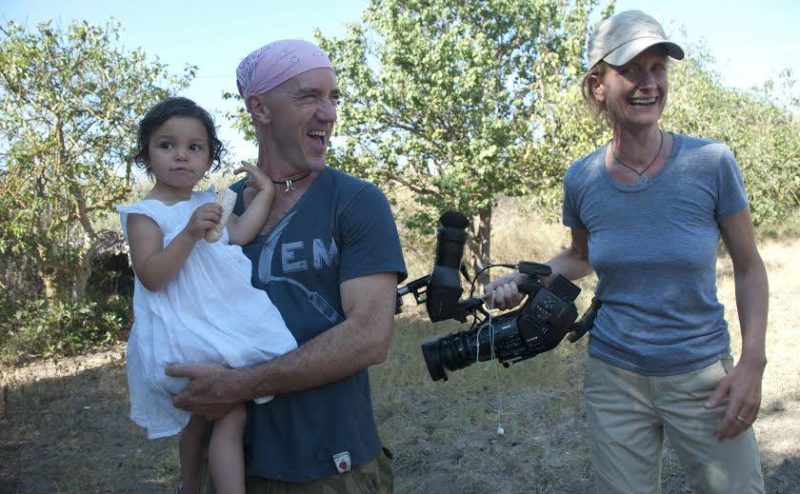 Share
Help kickstart three worthy local films this month -- The Guys Next Door, a documentary by Allie Humenuk and Amy Geller that explores the lives of two families and examines issues of gay rights, marriage, and surrogacy in the United States today; Confused By Love, a film produced, written, and directed by Crosby Tatum and partially inspired by his teenage years, when he and his mother had nowhere to live; and Emerson College student film Lily, an ambitious 1950s period-piece for which the students plan to build an entire set for the film.

Kickstart: The Guys Next Door

A Squared Films seeks Kickstarter support for its upcoming documentary The Guys Next Door. Co-directed and produced by Allie Humenuk and Amy Geller, the film explores the lives of two families and examines issues of gay rights, marriage, and surrogacy in the United States today.

The Guys Next Door introduces Erik, Sandro, Rachel, and Tony. Erik and Sandro are married with two daughters. Their friend Rachel, who carried their daughters, is married to Tony, with three children of their own. Told over three and a half years, the film follows the lives and choices of Erik, Sandro, Rachel, Tony, and their children. As they become parents, Erik and Sandro begin to reevaluate their own relationships with their mothers, while Rachel and Tony are profoundly affected by Rachel’s decision to act as a surrogate at the age of 41. The filmmakers hope that in addition to highlighting the bonds of friendship and family, the film can make a difference in combating the challenges that gay families face in the United States today. As the Kickstarter page explains, ‘While we were shooting, this country reached a tipping point in the fight for same-sex unions… This is where the film can make a difference. Like GLAAD’s Sarah Kate Ellis, we believe that if people see what a loving and complex gay family looks like, it changes minds.’

The goal is to raise $60,000 by April 11th. Funds will help complete the film and ready it for broadcast and festivals around the country. Allie Humenuk is an Emmy-nominated filmmaker and cinematographer and has taught at Harvard University and Massachusetts College of Art. Amy Geller is a documentary and television producer and has served as the artistic director of the Boston Jewish Film Festival. Editor Rachel Clark is a three-time Emmy nominee and has worked for PBS, BBC, the History Channel, and more. Read more about The Guys Next Door, the filmmakers, watch a short video, and make a donation here.

Triceptus Studios of Massachusetts seeks support through Indiegogo for the romantic comedy feature Confused By Love. Produced, written, and directed by Crosby Tatum, the film is partially inspired by his teenage years, when he and his mother had nowhere to live.

Ferguson Middlebacker is an author living with his wife Tiffany. When an old college friend and his girlfriend face a possible foreclosure on their home, the couple moves in with the Middlebackers. Confused By Love explores the highs and lows, friendships, and challenges of the two couples and their time together. Tatum writes on the Indiegogo page that he is inspired by filmmakers such as Spike Lee, John Singleton, and Ava DuVernay, but even more so by his mother: ‘It was her struggle to find a home, along with a number of financial and marital issues some of my friends and family members have gone through… that have inspired me to come up with this entertaining story…’ Tatum adds that ‘this movie will help individuals deal with the relationship and financial issues they face on a daily basis, so that we can have the success and happiness we feel we are meant to have in life.’

The filmmakers hope to raise $8,000 by March 27th. Donations will aid in the production, post-production, and release of Confused By Love, including equipment, on location filming in greater Boston, food, and more. To read more about the film and the team behind it, watch a short video, and donate, visit the Indiegogo page.

Emerson College student Ernest Lesmana seeks support through Indiegogo for Lily, a short film for his Bachelor of Fine Arts thesis. The film begins in the 1950s and tells the story of Lily, a housewife living in the suburbs, and her decades-long struggle to maintain the perfect life. As the filmmakers explain on the Indiegogo page, Lily finds herself confronted with ‘perilous choices — save her relationship with her daughter, her marriage, or her reputation?’

The goal is to raise $6,000 by March 24th. The team behind Lily includes director Ernest Lesmana, producers Leanna Furtado and Liz LeMay, and writer Kimberly Kelmelis. Donations will aid with production design (essential to the period piece details of the film), locations, equipment, transportation, and more. Watch a brief video, learn more about the film and filmmakers, and make a donation here.