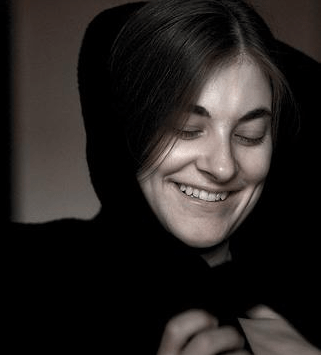 A Girl, a Cat, a Bomb: An Interview with Laura Maxfield

Laura Maxfield is currently on the festival trail with her short film, a Girl, a Cat, a Bomb which premiered at the New Hampshire Film Festival in October and screened at Another Hole in the Head Festival in San Francisco at the beginning of December. “I love coming back to New Hampshire for the festival especially since it’s at the height of fall,” explains Maxfield. “We just don’t get the colors in New York that you do in New Hampshire. It’s a homecoming of sorts and a delicious visual treat.”

Maxfield is a New Hampshire native. “I’m originally from “the oldest summer resort in America” Wolfeboro, NH where I had an idyllic country childhood and a rebellious adolescence.” She attended Drew University, where she studied Creative Writing and English – film hadn’t yet been on the cards. “Drew did not have a film program and in fact when I was in college I wasn’t looking to get into film. It wasn’t until the end of my senior year when I had one of those ‘what am I going to do with my life’ moments of ennui that I realized I wanted to be a filmmaker.”

Similar to many of the woman I have interviewed for this series, film doesn’t seem to strike many from an early age as a possible career, in fact it almost always comes later. However, the roots of a film career can often be found from a young age when we look back. “I had been enamored with the idea of being a filmmaker throughout my childhood,” continues Maxfield. “I was very imaginative and I think the possibility of bringing those imaginings to life was exciting. I was also a very bossy child and I’m sure the idea of being in charge had it’s appeal as well.”

After graduating in 2004 Maxfield worked in the industry as an intern, with one experience leading to a job as an assistant at HDNet Films. “I worked there for several years and made my first comedic short “Vibrator” which is now on youtube. Maxfield transitioned into her own projects after leaving HDNet. “I wrote a couple of terrible feature screenplays and made another short XX, which is an experimental post apocalyptic film,” she explains. “In 2010 I made Hunting which is my most ambitious project. It was my first time fundraising which was a steep learning curve and I used Kickstartr back when no one knew what that was.” The award winning Hunting screened at several festivals and is now available on Hulu.

“I had a great time in 2011 with Hunting. I met some wonderful people including Nicole Galovski who is the head programmer for NHFF. She works incredibly hard and is really passionate and talented. It’s always inspiring to be around people like that. This past year with a Girl, a Cat, a Bomb it was extra special because it was my second time around. The festival really welcomes you come back. Plus, I knew how things worked, so I was less nervous.” Maxfield was even able to enjoy the festival with her family, and DP this year.

Maxfield has worked as both an assistant director and producer alongside David Wain, Scott Derrickson and Peter Askin and with producers Andrew Fierberg and Per Melita. However she is back to focusing on her own creative projects. “I’m not the type of person who can easily balance film work and a creative life. I find that the one often consumes the time for the other.” She is currently working on a horror driven short about a couple whose long term relationship is ending with her husband, actor, Jordan Douglas Smith and Megan Melnyk who was the lead in Hunting. “Jordan and I are also writing an ultra low budget feature called Control about a young couple who become pregnant, illegally, in a future America where a one child policy has been put in place.” They hope to shoot at the end of 2015 or early 2016.

Maxfield has undertaken many roles throughout her ten year career in the industry, but wearing several hats isn’t always a bad thing, she claims. “Basically it’s just a lot of hard thankless work with bits of fun and inspiration thrown in. Ultimately, since you are working towards something that you are passionate about and believe in, it’s all worth while.” Collaboration is important however for this creative and inspiring filmmaker. “I have produced all of my own shorts, but I always make sure I have another producer to help share the responsibility, so I can concentrate on the story and not get too bogged down in the day to day. Coming from a production background I can get too wrapped up in those concerns so I make it a point to pass that responsibility to another capable person.” We agree, after all, that film is a collaborative medium, and that working together with the right people makes the best films. Maxfield adds, “…and when you find people you work well with, you hold on to them.”

Shawn Greene, who has been Maxfield’s Director of Photography on her last two projects is a good example of the right person, and the perfect collaborator. “He’s passionate about film and shooting, he is willing to go the extra mile to work on projects he likes,” says Maxfield. “The goal is to work with people you love, on projects you love and hopefully be able to pay everyone for their hard work. That’s what I’m working towards.” Hear, hear!

You can learn more about Laura Maxfield and her work on her website [http://www.maxflyfilms.com/]. And you can also check out her Vimeo page for her most recent work. [https://vimeo.com/maxflyfilms].

We are always on the look out for more Females in Film to participate in this series, if you would like to add to the conversation, or start a new one get in touch with us and share your views online at NewEnglandFilm.com, on twitter using #femalesinfilm or by emailing me at catherine@filmunbound.com.

You can learn more about Laura Maxfield and her work on her website [http://www.maxflyfilms.com/]. And you can also check out her Vimeo page for her most recent work. [https://vimeo.com/maxflyfilms]. We are always on the look out for more Females in Film to participate in this series, if you would like to add to the conversation, or start a new one get in touch with us and share your views online at NewEnglandFilm.com, on twitter using #femalesinfilm or by emailing me at catherine@filmunbound.com.