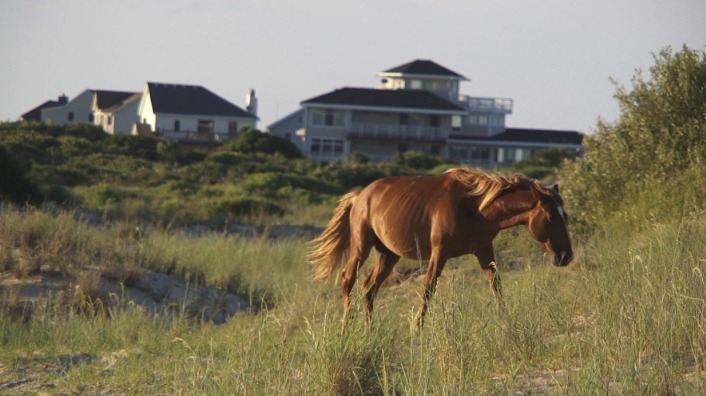 ‘Leave No Trace’: An Interview with Documentarian Cozette Russell

Share
Fellow female film professionals discuss work, life, and more in this new series, Females in Film. For this installment, NewEnglandFilm.com writer Catherine Stewart talks to Cozette Russell about capturing the relationship between people and the land they live on.

“There’s a little dance that you do,” explains documentarian Cozette Russell when discussing her recent cinema verité work that follows the life of first generation farmers in rural New Hampshire. “If they turn their backs, I know they don’t want me to film what they might say next. That makes me think, I need to film what’s about to happen.”

There is always a fine line all filmmakers tread when capturing important and meaningful moments with subjects, while trying not to disrupt the action or exploit the situation. Achieving that balance strengthens the relationship between a filmmaker and their subject which in turn often creates the most powerful documentary films. The phrase often used by environmentalists, and outdoors enthusiasts comes to mind, ‘leave no trace’.

Russell seemingly embraced this idea when filming Brookford Almanac – a fly-on-the-wall look at the life of Luke and Catarina Mahoney owners of Brookford Farm in Rollinsford, New Hampshire. “Filmmaking always involves respect,” continues to Russell. “Even if your story changes, or the film isn’t becoming what you had planned.” That respect is evident on both sides of the camera with this work.

“My work explores the relationship between people and land,” explains Russell as we talk on a sunny Saturday morning prior to her film screening at the inaugural Slow Cinema event in Portsmouth, NH run by Slow Food Seacoast. “And there is often a little more pressure on the audience to seek out the story. I show them something interesting or intriguing rather than telling them precisely what they ‘should’ know.”

Russell studied filmmaking at Antioch College in Yellow Springs, Ohio, and received her MFA from the School of the Art Institute of Chicago in film, video & new media. She is currently the Program Coordinator at The Film Study Center at Harvard University and she lives with her husband and creative partner Julian Russell in Lee, New Hampshire.

“There have been several seminal women filmmakers who have strongly influenced and guided my work as an artist. My freshman year in college I saw the work of Maya Deren and I was completely blown away by it, she made me think about images and editing in a way I never had before.” Maya Deren was one of the most influential experimental filmmakers in the 1940s and 1950s who worked tirelessly to promote the avant-garde. “I also saw the work of Sadie Benning, Carolee Schneemann, Chantal Ackerman and Agnes Varda and those women’s films really helped me feel freer in my experimentation with the camera early on. While my work has gradually become less experimental I am grateful for the path these women have guided me along as an artist.”

Russell’s experimental past is evident in her work, without overpowering the simple story that is often at the heart of her films. Brookford Almanac, as one example, is accessible in a way that many films with similar influences are not. And it achieves that approachability without stepping into the world of the ‘cookie-cutter’ documentary that is so prevalent today.

Russell’s current project Sea Horse, which is in production and seeking financing, is also steeped in her fascination with land and people. Sea Horse takes place in a small town in the Outer Banks of North Carolina where wild horses roam the beaches. For over 500 years these horses have made this fragile peninsula their home, surviving off of marsh grasses. Now facing extinction from geographic isolation, a shrinking gene pool and rapid housing development, the film examines their struggle for survival. “This film will take on a slightly different structure,” says Russell. “But its really fun to dive into something new.”

Judging by the stills on the film’s Facebook page Sea Horse is set to rival the beautiful visuals found in Brookford Almanac. However, it is not only the aesthetic that raises my excitement for this project. Russell’s uncluttered storytelling, which is deftly presented in Brookford Almanac, is what makes her work so special to view.

You can learn more about Cozette Russell and her work on her website. You can donate to help the creation of Sea Horse online through the project’s fiscal sponsor. Brookford Almanac is available for purchase online.

We are always on the look out for more Females in Film to participate in this series, if you would like to add to the conversation, or start a new one get in touch with us and share your views online at NewEnglandFilm.com, on twitter using #femalesinfilm or by emailing me at catherine@filmunbound.com.

You can learn more about Cozette Russell and her work on her website. You can donate to help the creation of Sea Horse online through the project’s fiscal sponsor. Brookford Almanac is available for purchase online. We are always on the look out for more Females in Film to participate in this series, if you would like to add to the conversation, or start a new one get in touch with us and share your views online at NewEnglandFilm.com, on twitter using #femalesinfilm or by emailing me at catherine@filmunbound.com.