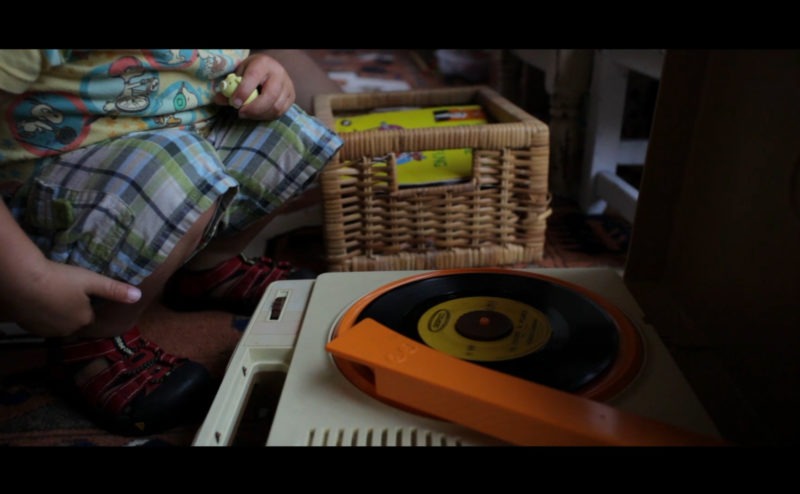 Share
With a 5D and some gear from Vermont Community Access Media, filmmaker Matt Day created the documentary gem Shape of Things to Come, which invites viewers into the life and music of music producer and front man of The Books, Nick Zammuto. Day discusses the process of making the film and how it changed his career, and readers can still watch this Jury Prize award-winner for Best Documentary online through the 2014 Online New England Film Festival.

Based in Burlington, Vermont, Matt Day’s latest film Shape of Things to Come invites viewers into the life and music of music producer and front man of The Books, Nick Zammuto. The film premiered in 2012 and quickly received acclaim, screening at the 2012 Vermont International Film festival, winning the juried award for Best Documentary Short at the Napa Valley Film festival as well as the Goldstone award, and appearing on the homepage of the online music publication Pitchfork. Readers can still watch Shape of Things to Come through the 2014 Online New England Film Festival, where the film won the Jury Prize for Best Documentary.

Polished and professional as it is, Shape of Things to Come seems to serve as a perfect representation of Day’s roots in filmmaking, acting as part of the series of documentary short films about musicians titled “NakedMusicians” that began his career.

“NakedMusicians was the very first thing that I did with a camera,’ Day says. ‘It was simply filming musicians in one-shot in a more intimate setting than a stage. Working with musicians to get going in video was a great way to go about it, they are already supply a huge piece of the art in their music.”

Day decided to make Shape of Things to Come after seeking permission from Zammuto to use The Books’s music in another documentary short he was working on about Vermont sculptor Clark Derbes, a film that later became an Official Selection in the 2011 Vermont International Film Festival.

Day recalls that what drew him to make Shape of Things to Come was Zammuto’s inspiring talent. ‘I was instinctively drawn to filming someone inspiring as I was just getting into filming and I wanted to shoot something I was fascinated and inspired by. There wasn’t really anything that motivated the filming more than him being very talented,’ he says.

In the spirit of his previous documentary shorts, Day shot part of the documentary in the intimate setting of Zammuto’s quaint Vermont home, acting as a one man crew with DSLR in hand. ‘The crew was just me with some gear from Vermont Community Access Media and a Canon 5D with Zeiss Distagon ZF Lenses,” he says.

At first, Shape of Things to Come was comprised of what appears in the first eight minutes of the film. It wasn’t until six months later that Zammuto contacted Day to shoot the second portion of the film. “I filmed the first 8 minutes that first day that I met with Nick and filmed. He called me 6 months later when they had their first show and I came down and filmed for another two days,’ he says.

What makes Shape of Things to Come so intriguing is that Day wastes no time explaining who Zammuto is or what he does. True to his filmmaking style, Day immediately throws his audience into what seems to be a genuine day in Zammuto’s life, seeming that way because in a sense, that’s what he filmed.

‘As with most documentaries, I had very little control over the events that happened,’ he says. ‘The camera is an observer, so inherently it shouldn’t be dictating situations. Documentaries end up being a combination of observing and performing though. The subjects may alter their lives based on the filming: giving tours, having kids play with toys for the camera, doing multiple takes of backing out of the driveway so you can get the shot right. But all in all, it was a couple days in Nick’s life as they happened with a moderate amount of influence from me.’

Day claims that part of the film’s ability to immerse his audience in what feels as though it is an organic experience of Zammuto’s everyday life may be a result of his the limited use of lighting equipment. He states that it was this and the shallow depth of field created by the Canon 5D used to shoot the film in such low light that gave the film a professional yet home movie-like appearance. ‘Largely the film is unlit except for a couple tungsten units in the practice room which is really giving the shack that glowing warmth in the middle of the blue and white outdoors. It was almost completely handheld as well, and shot on fairly wide lenses close up to the subject, making for soft focus and giving it a nice personal look,’ he says.

Day also partially attributes the film’s uniquely personal feel to his own fresh perspective of Zammuto’s home-life through what was then an unfamiliar lens. He says, ‘ I had no idea what I was doing. I was so focused on framing, learning new shots, and playing around with the camera, which I think might have given it that feel.’

From the birth of Zammuto’s third child to the first live performance of his new band, Day endears his audience with a touchingly personal and artfully accessible account of these milestones in Zammuto’s life. Apart from visually stimulating cinematography and heartwarming depictions of a growing family, Shape of Things to Come, and many of Day’s other documentary short films, achieve something that numerous documentary filmmakers strive for: they honestly capture important moments in a subject’s life. Day’s ability to do so has set him apart as a documentary filmmaker in the film community and helped him to develop a career in the film industry.

Since finishing Shape of Things to Come, Day has begun channeling his creative energy into more commercial work. In fact, he is currently in the process of completion three documentary commercials, including a commercial documentary short for MINI Cooper produced in association with BuzzFeed. Commercial success aside, Day hasn’t forgotten his roots.

He recounts a recent commercial he worked on, describing the joy he found in working in what he describes as a “run and gun” small budget environment. “I was filming for Fletcher Allen at a hospital and a crew of window washers put on superhero costumes while rappelling down the side of the building. Kids waiting on the inside had a blast seeing them show up outside their window. It really put a smile on my face. It was a last minute small budget show that I tackled with one other camera man, which was a nice change from the jobs where I hire a crew, rent a ton of gear and deal with a million other things.”

Day continues to work with the Signal Kitchen, a multimedia production facility in Burlington, Vermont, from which he tells us that viewers should look forward to some new music videos and documentary short films in the near future. And of course, lest they be forgotten, Day’s own production company, Wondermind Pictures, is sure to have a few projects on the horizon.

When asked how making Shape of Things to Come changed him as a filmmaker, Day responded, ‘The outcome and response to the film helped shape my career as a filmmaker.’ This is evident, as Day makes more documentary short films, award winning music videos and commercials.

‘Now I have a stable career. I’ve gotten to work around the country with very talented people and don’t plan on stopping that trend, but hope to apply it to forms of production other than just commercial,’ he says.

Whether those other forms of production will be a full length documentary or another series of documentary shorts, Day isn’t quite ready to divulge his plans just yet. But be assured, fans and viewers of Day will have new films to look forward to in the coming year.