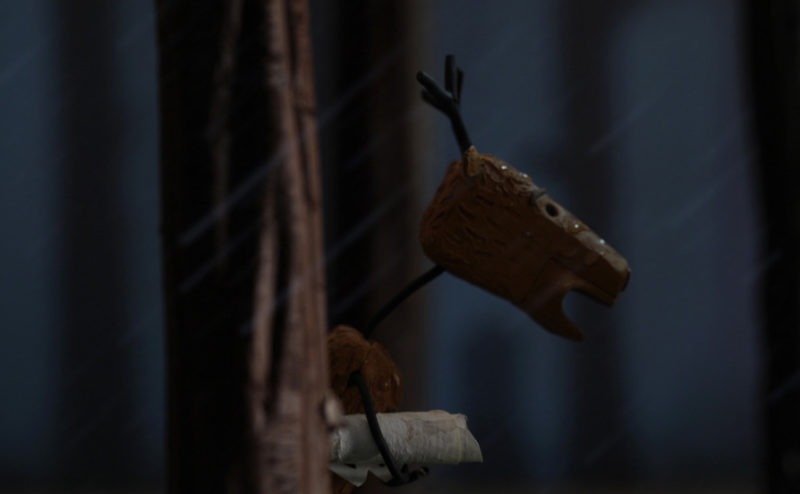 The Jury and Audience awards of the 2014 Online New England Film Festival have been announced. Watch the 42 local films from 17 New England film festivals through October 15 on our website.

Check out the 4th annual New England Underground Film Festival on October 11th at the University of Hartford, Connecticut. Tickets are $10 general, $5 students. For a schedule and more details, visit the festival website.

The Rhode Island International Horror Film Festival runs October 20–26, including a filmmakers forum and walking tour. For more details, visit the RIIFF website (Pictured above is Rabbit and Deer screening at the festival.

Rule/Boston Camera hosts a number of events for filmmakers this month, including the Illumination Experience Tour with Shane Hurlbut at the Boston Marriott Peabody on October 9. Use RBC discount code IETRBOS to register at http://illumination.mzed.com. They will also host Learning Labs featuring SmallHD DP7s on October 15 and the Next Generation in LED Lighting on October 25. In addition, there will be a MoVI Practitioner’s Workshop on October 25 from 9am to 5pm at RBC. Limited to 9 participants. See details at www.rule.com.

There are plenty of opportunities to scare yourself at the Coolidge Corner Theatre this month, including the 14th Annual Halloween Horror Marathon and screenings of Fright Night, Soylent Green, Frankenstein, Dracula, and more throughout the month. Visit coolidge.org to learn more.

Berkshire Film and Media Collaborative and Baystate Health present Western Mass Film and Media Exchange on October 24th from 10 am to 6 pm. Filmmakers are invited to a day of workshops, seminars, and networking at the Whitney Avenue Conference Center in Holyoke. For tickets and more information, click here.

The Museum of Fine Arts Boston hosts the premiere of documentary A Matter of Conscience: Confronting Clergy Abuse on October 4th at 2 pm. A panel discussion will follow the screening. For tickets and more information, visit the MFA website.

The Woods Hole Film Festival will host a four day Best of the Fest screening series from Sunday, October 19th through Wednesday, October 22nd for award winning films from the 2014 festival. Tickets are $10 each or $30 for all four evenings. Visit their ticket site for more information and to purchase tickets.

The DocYard kicks off its fall season with a screening of E-Team at the Brattle Theatre on October 6th at 7:00 pm. Learn more about the program and upcoming documentary screenings at thedocyard.com.

Women in Film and Video: New England and Harvard Square Script Writers present a staged reading of 2013 Screenwriting Competition winner Santa Sierra’s In Search of Our Father, Sylvester Stallone at the Central Square Theater on October 28th. Reception starts at 6:00 pm, with performance at 7:00 pm. Tickets are $15 for members, $20 for non-members. Learn more here.

In November, Rhode Island will vote on a Cultural Bond Initiative that could potentially provide $35 million for arts and cultural institutions as well as historic preservation. Read more from the Rhode Island State Council on the Arts.

Shot in Massachusetts, The Judge, starring Robert Downey Jr. and Robert Duvall, opens this month. Meanwhile, features The Finest Hours and Spotlight have also been filming recently in Massachusetts.

Register for the Massachusetts Flash Film Festival. Filmmakers will have 72 hours to write, shoot, and edit a short film later this month. For more details and to register, click here.