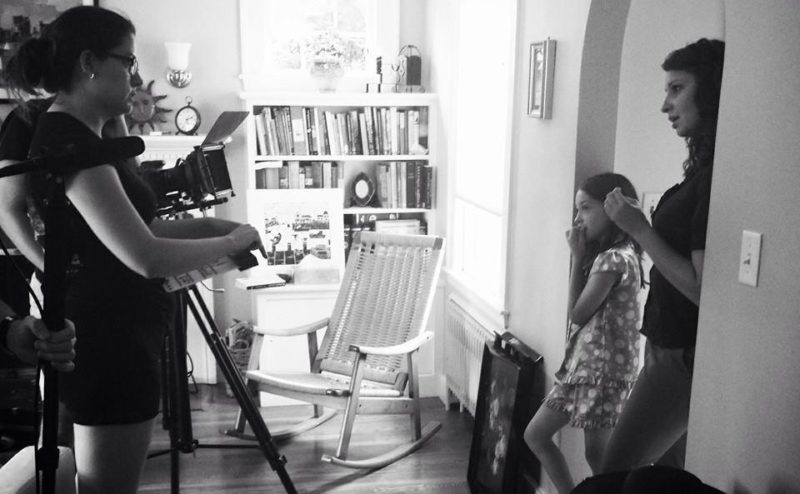 Boston Indie Horror: An Interview with Filmmaker Andrea Wolanin about ‘M is for Mundane’

Written by NewEnglandFilm.com | Posted by: Anonymous

Share
She might have been a showgirl or a hitman, but as it turns out Andrea Wolanin is a filmmaker. Here, she talks about the tight-knit Boston indie horror community and making her film M is For Mundane (now screening at the 2014 Online New England Film Festival) and her upcoming production Penta.

She might have been a showgirl or a hitman, but as it turns out Andrea Wolanin is a filmmaker. Here, she talks about the tight-knit Boston indie horror community and making her film M is For Mundane (now screening at the 2014 Online New England Film Festival) and her upcoming production Penta.

My mother always brought home the slightly-off movies from the video store when I was a kid. At far too tender an age, I was exposed to the brilliance of up-and-comers like Quentin Tarentino and Kevin Smith, as well as classics from Mel Brooks, Terry Gilliam and David Lynch.

Somewhere between Madeline Kahn’s cracking herself up as Lili Von Schtupp (there’s a moment, just before she’s off stage where you can see she’s already begun to laugh) and watching Vincent Vega and Jules Winnfield debating the boundaries of the foot massage, I realized that this beautiful, ridiculous medium was what I wanted to dedicate my life to.

Of course, my first instinct was that I wanted to be a showgirl or a hitman, but through trial and error, I’ve sorted the confusion out.

What inspired you to make your film?
M is for Mundane was created for the ”ABC’s of Death II” open call in 2013. I was intrigued by the concept – sometimes limitations breed the most creativity – and when Wicked Bird approached me to write and direct a piece for their production, I was excited to get on board.

In writing the film, I was inspired by two ideas: first, by how little you really know about the people who surround you in everyday life; second, how maddening the confines of routine, schedule and socio-economic boundaries can be. I wanted to create something that spoke to the second by pulling fear out of the first.

Where has the film been shown?

The film was online for the ABC’s of Death II competition, where it got as high as in the top 20 (but didn’t ultimately win! Rats…). In addition to this, it has been shown in smaller screenings and festivals around Boston, as well as the super-awesome Boston Underground Film Festival and the Rock and Shock Convention. Due to its history as a competition submission, it hasn’t been submitted to too many festivals, as new, premiere offerings tend to get preference.

Audiences are always, always amazing. I think that the most memorable experience for me was probably getting to screen is at Rock and Shock, which is held in my hometown of Worcester, MA. It was so incredible to be able to share something I created with the town I came from (and all the visitors to the convention!).

A lot of the cast and crew were local – the Boston indie horror scene is really tight. Perhaps less of a family and more of a twisted little cult, but six of this, half a dozen of the other. Bryan, our DP, and Shayne, our composer, had worked on fellow writer-director Izzy Lee’s film Legitimate (and went on to work on her current Picket). Shaun, one of the supporting actors, is a local musician and has gone on from Mundane to be in a couple of Izzy’s films, as well as starring in my latest, Penta (currently in post). Also, if you look close in the background of the office scenes you’ll see another local creator – Skip Shea, director of Microcinema and Ave Maria.

And, of course, I can’t say enough about Wicked Bird Media. They were incredible with the production of this film. John, the lead, has been in enough films that he should have been out of my league – lucky for me, Stacy secured him within moments of my script pitch. She and Jess looped in the team, the perfect crew for this piece. I’m so thankful to have had two such supportive women at my back for this project.’

Right now I’m in post-production on a film I’m calling Penta, and is based on the Italian folktale The Girl Without Hands. It’s a science-fiction horror film that questions femininity, humanity and the system of abuse. The titular heroine, played by local performance artist Porcelain Dalya, is a robot created to be the perfect woman. As she acclimates to the world around her, she changes in ways that startle her owner and spur a grim chain of events.

Any advice on making films you want to share – about fundraising, working with actors, distributing, sending to festivals, etc?

Just make them. There’s this Stanley Kubrick quote I’m 100% confident I’m being super pretentious by mentioning, but it’s always rang true to me: ‘…the best thing that young filmmakers should do is to get hold of a camera and some film and make a movie of any kind at all.’ Just keep making films. You might not have the budget for your ‘vision’ now, but you have a budget for something. Start small. Find people who believe in you and want to see you succeed, and want to help you succeed.

One of the things that’s always important to me on set is that everyone’s happy and comfortable – I’m no Friedkin. I want everyone well fed and happy, especially if we’re about to launch into some horrific scene. Be there for all the questions, even if you think they’re stupid. Think about what you’re asking the actors to do – would you do it? If not, be understanding if they don’t want to do it.

Something I’ve had to learn, is to be aware of your cast and crews energy level – things slow down when people are exhausted, and they can get miserable fast. It’s way too easy to keep steamrolling through as a director – even if you don’t need a break, take a look at the people around you and learn to recognize when it’s time to call cut.