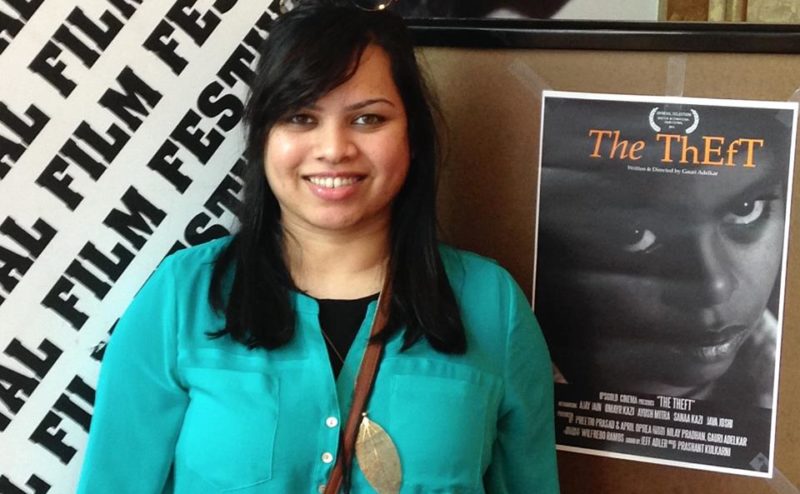 Interview with Filmmaker Gauri Adelkar on ‘The Theft’

Gauri Adelkar’s first film project The Theft was not an easy one. But, then again, what film project is without its challenges? “I needed South Asian actors living in the New England area who could speak Hindi fluently, and were willing to work with a first-time director with no budget to compensate them,” Adelkar tells me. “Plus they had to be available to shoot in April since the film had to be ready by my graduation in June.” Adelkar’s film, The Theft, is a short film set in modern day India about the induction of young kids into social hierarchy.

Shot in Somerville, MA, The Theft is Adelkar’s graduation project from the Digital Filmmaking Program at Boston University. The film was conceived from a culmination of questions arising from observations and experiences throughout her life. “A lot of privileged children who grow up in a city like Mumbai, at some point in their lives, have questions about the societal status quo, and the class/caste divide they see around them. I wanted to ask these questions through a story. I also wanted to explore how a child, who was not raised in India, would internalize these observations.”

Adelkar was born and raised in Mumbai, India, where she studied electronics engineering. She came to Boston to finish her graduate studies, completing a Masters in electrical engineering from Northeastern. She is now based in Somerville, and the Boston area has been her home since 2002.

Similar to many new filmmakers out there, Adelkar is taking on many roles and learning as she goes. “I am the writer, director, and editor, who is currently dabbling as an online marketing strategist, held together and kept sane by a very passionate team of collaborators who are great people as well.” Adelkar tells me that her biggest collaborator and supporter on this project was her husband Nilay. “For a woman filmmaker, it can get quite difficult in a patriarchal world without the unconditional support and encouragement of your spouse/partner who believes in you as an equal.”

Finding the child actors for the film was Adelkars most cherished part of the process, due to the sheer challenge. “I had never worked with children before, nor have any of my own, and was advised against working with children on my first film, where we had only about a month between the auditions and production. We found Ayush Mitra and Omayr Kazi through our audition call and word of mouth, and directing them has been a joy.” Adelkar also credits NewEnglandFilm.com for helping her find her Director of Photography, Wilfredo Ramos. “He is extremely talented. I was lucky to have worked with Jeff Adler our sound recordist in the past, and he is a great guy to have on the set. The rest of our production team was put together by my producer Preethi Prasad again through referrals and ads on NewEnglandfilm.com.” Making a film truly is a collaborative effort, and having a crew that you trust and that supports you is imperative.

Adelkar and her team are honored to be invited to be part of the Online New England Film Festival 2014. “Considering the current market for online streaming, being invited to showcase your film, along with some of the best films from the region, is a privilege. It has given our film a chance to be exposed to a much wider audience and possibly future collaborators.” The Festival is allowing the film to reach supporters around the globe who have currently been unable to view the film anywhere else.

Adelkar is excited to be part of the Boston film scene. “This area has a great deal of untapped potential for being an independent film hub. We have many talented writers, directors, and filmmakers from all over the world.” But Adelkar believes that in order to ensure that future, there is a need for more tax and funding incentives as well as easily accessible studio space for independent and emerging filmmakers who want to make films in Boston.

Adelkar also wants to see more support for female filmmakers. “As a woman filmmaker, I’ve had the occasional experience where someone won’t take you seriously because you are a woman. I hope for more large-scale initiatives all over the world where aspiring women filmmakers and storytellers can share their professional and personal struggles.”

And I agree, the female filmmakers are out there, but we need to hear more from them in both the independent scene and the wider industry. Adelkar suggests that the industry can help by hiring a lot more women in key roles such as directors, producers, cinematographers – she also believes that educational institutions and film organizations have a responsibility to future generations. “They need to be providing scholarships and mentorship in schools and colleges, for young girls who aspire to be filmmakers.”

The Online New England Film Festival runs from September 1st to October 15th, here on NewEnglandFilm.com – don’t forget to watch The Theft by Gauri Adelkar. You can see more about The Theft at http://thetheftmovie.wordpress.com/