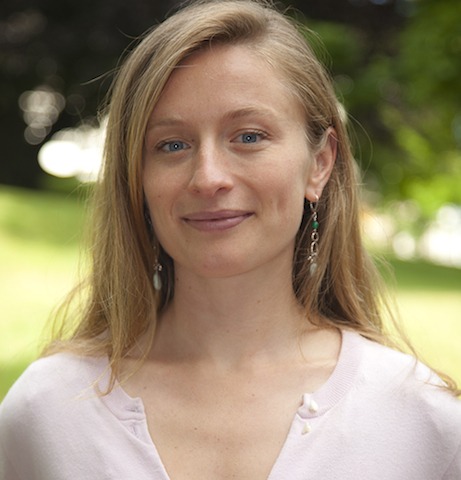 Share
Fellow female filmmakers discuss work, life, and more in this new series, Females in Film. For this installment, NewEnglandFilm.com writer Catherine Stewart talks to filmmaker Elise Hugus about her passion for filmmaking and the environment. Her film The Watershed can be seen on NewEnglandFilm.com as part of their annual Online New England Film Festival.

There’s been a common thread through the biographies of the female filmmakers that I have been talking to for the Females in Film article series here at NewEnglandFilm.com. Many follow a similar path – born in a New England town, left for some time to study or travel, and then returned to the region to make work, find collaborators and develop a career in the industry. Elise Hugus, co-owner of UnderCurrent Productions and director of The Watershed, is no different. Native to Massachusetts, she grew up in Falmouth, studied in Canada and Denmark, then returned to Massachusetts — specifically Woods Hole — to set up a production company with her husband, Daniel Cojanu.

“I never wanted to be just one thing — or put in a box.” Hugus feels that her background in sound recording and journalism has prepared her well for a career in documentary filmmaking. “Marrying a talented filmmaker doesn’t hurt either”, she adds with a laugh. After several years working as a journalist, Hugus found that she couldn’t examine stories to the depth she wanted to. “Documentary filmmaking is a really good way to appeal to people and touch them in a way that the facts and figures of journalism can’t.”

Hugus is excited about her first film to make it to the festival circuit, and hopes that it is the first of many. Her route to this production wasn’t conventional, though. UnderCurrent Productions was hired by the Association to Preserve Cape Cod (APCC) to create a series of videos on the water quality issues facing The Cape. “The issue was so important that we decided to shoot some of the footage in a more cinematic way, and release The Watershed as a documentary. The clients are happy because their message is reaching even more people.” It is often a challenge to marry the practical work of earning a living from filmmaking with developing as an artist, but Hugus seems to be doing this with great care, style and consciousness for both her art form and her environmental beliefs.

The Watershed can be seen on NewEnglandFilm.com as part of their annual Online New England Film Festival until October 15. “It hasn’t been screened extensively, but we did screen the work at the Woods Holes Film Festival, which is a great event that showcases work from people at various stages of their career.” Hugus is currently waiting to hear about more screening opportunities, and that is giving her time to build up her courage as a film director. “I’m not really a director, it kind of directed itself,” she says about her most recent work. At a recent screening, however, Hugus received some sage advice from a fellow female filmmaker: “I was told I need to give myself more credit, and take ownership of my work.”

As Hugus continues to develop as a filmmaker, tackling issues that are important to her and the world we live in, she has a collaborator and partner by her side — another common biographical thread I’ve seen with others, including myself. “It’s convenient. It’s more than that of course, but it is convenient,” Hugus explains. “You have things you can talk about, you can explore ideas at dinner or in passing. He’s extremely talented and I am lucky to learn from one of the best. Hopefully it’s mutual.” Hugus goes on to say that perhaps the work/life balance isn’t quite right, but she also has a refreshing view on the life and work of an artist that I adhere to as well. “I don’t see a big difference between life and work. If you are doing what you love, then it carries through every part of your life. You are that person at all times, and there shouldn’t be a delineation between the two.”

You can view Hugus’s informative and beautiful documentary The Watershed, along with other great short films, during the Online New England Film Festival at http://www.newenglandfilm.com/festival/2014. More about Elise Hugus and her work can be seen at http://www.undercurrent-productions.com/

Remember you can always share your views on Females in Film online at NewEnglandFilm.com and on twitter using #femalesinfilm.

You can view Hugus’s informative and beautiful documentary The Watershed, along with other great short films, during the Online New England Film Festival at http://www.newenglandfilm.com/festival/2014. More about Elise Hugus and her work can be seen at http://www.undercurrent-productions.com/ Remember you can always share your views on Females in Film online at NewEnglandFilm.com and on twitter using #femalesinfilm.