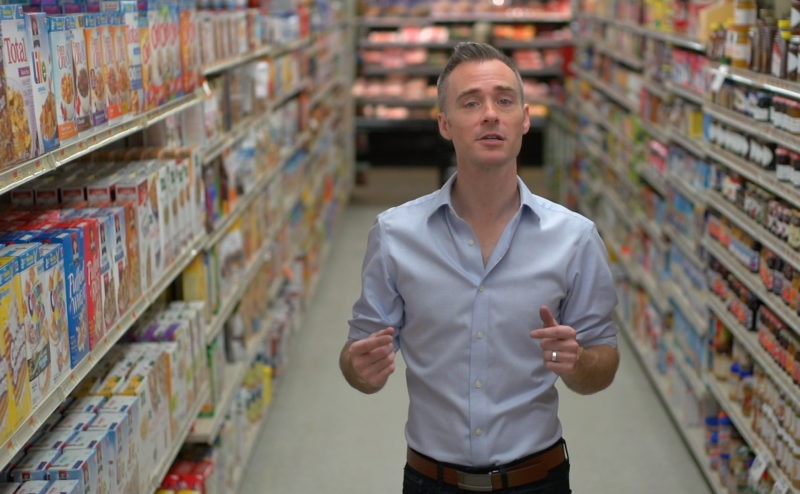 Share
Filmmaker Lathe Poland opens up about his experience making Carb-Loaded: A Culture Dying to Eat (premiering at The Ridgefield Playhouse in Ridgefield, Connecticut on September 27th), a documentary inspired by his own personal battle with type 2 diabetes.
It’s no secret that diabetes is becoming an increasingly prevalent issue in America. In 2010, the Center for Disease Control (CDC) reported that one in 10 American adults had been diagnosed with the disease. That’s a whopping 10 percent of adult population in the country. Even worse news is that the CDC estimates that the number of people suffering from diabetes in the U.S. would double or possibly even triple by the year 2050, which would amount to nearly half of the American population diagnosed by 2070.

Such an alarming revelation has left consumers seeking refuge in fat-free food products and fat-burning diet supplements. Connecticut filmmaker Lathe Poland’s soon-to-premiere documentary Carb-Loaded: A Culture Dying to Eat warns against the fat-free craze. Through a series of informative interviews, amusing animations, and Poland’s narration, the film urges Americans to reevaluate the way they approach eating generally, proposing that a cultural shift in the way we think about food may be our best defense against type 2 diabetes.

Lathe Poland was among the 10 percent of adults in the United States diagnosed with diabetes in 2010. In an interview with The DX: The Diabetes Experience, Poland described his immediate reaction to the diagnosis as complete shock. Contrary to his understanding of the disease and those who suffer from it, he had maintained an average weight for much of his life and was always fairly active. He now found himself faced with the task of adopting a new lifestyle. Poland recounted that figuring out what kind of lifestyle that should be proved to be an undertaking all its own, ‘When I was first diagnosed I almost felt like what can I eat? There’s nothing I can eat.’

With some research and a little encouragement from his wife, Poland began experimenting with low-carbohydrate, high-protein diets. He found that the more he reduced his carbohydrate intake the better his blood glucose control became. This discovery gave Poland renewed sense of control over his health, a comfort that few diabetics ever come to realize they can enjoy.

Reenergized, Poland set to work on a more global investigation of type 2 diabetes in the hopes of helping others avoid the habits that led him to be diagnosed with the disease: ‘Nearly all type 2 diabetes cases can be avoided. The more that I learned that I basically ate myself into my health situation and that I could eat myself out of it, and the more I would see people making the same choices I did, made me want to share this information. Knowing something that can save a person’s life does make you want to share it.’

At the time of his diagnosis, Poland had been the co-owner of a small production company known as The Scene Lab with his long-time friend, Eric Carlson, for 6 years. The company specialized in making web commercials and B-roll footage, but was looking to do something bigger. With his newfound inspiration to share what he had learned from his experience with type 2 diabetes, Poland sought that something bigger in the form of a documentary about American food culture called Carb-Loaded: A Culture Dying to Eat.

For Poland, making a documentary through The Scene Lab seemed a logical choice for their first feature scale project. He stated, ‘As a filmmaker, I was the guy going out with my camera and doing interviews. The great thing about documentaries is that documentaries can be a great way for small companies to start making movies. We had a great situation, we had all of our equipment because this is what we do.’ Still, like with any other production, there were hurdles to climb and obstacles to overcome.

Together, Poland and Carlson decided to film a portion of Carb-Loaded prior to launching a Kickstarter campaign for the documentary. Doing so would allow them to give potential backers a taste of what they’d be funding.

Facilitating the first half of Carb-Loaded themselves, Poland and Carlson were challenged with putting together a list of interviewees and crew that would produce the high quality representation of the film they were hoping to see once the documentary was fully funded: ‘We [were] pretty adept with making an online portfolio that we would share with potential clients, but consistently being able to produce that quality of work is a big challenge. We spent a lot of time finding the right people: the right camera operators, the right animator.’

Most of all, Poland sought to do what he recommends that all indie filmmakers do: ‘Make sure you’re getting the right people, people that will garner the respect for the project that it deserves.’ It seems that Poland did, in fact, find the right crew members. When the Kickstarter campaign came to a close in August of last year, Poland and Carlson had exceeded their original goal of $40,000 by $18,050, leaving them nearly $60,000 to complete the project.

While Poland was pleased with the success of the Carb-Loaded Kickstarter campaign, he noted that the most rewarding part of his crowd-funding experience was the immense following the documentary developed as a result of the campaign, “You can have a benefactor give you $20,000 and that’s great. But when you finish the film you’ve got one customer. But if you crowdfund it you make the film and you’ve got 1,000 customers. So [I] don’t think about crowdfunding as funding but think of it more as crowd-marketing.” With 900 backers awaiting Carb-Loaded’s premiere and 7,000 likes on Facebook, it seems safe to say that Poland’s crowd marketing is working.

Crew assembled and funding complete, Poland and Carlson traveled all over the country conducting numerous interviews with authors, scientists, nutritionists, doctors, food bloggers, etc. Poland claimed that out of all of their expenses, travel was one of their greatest financial strains: “One of the biggest challenges became getting as much bang for our buck when it came to interviews as we could. Getting cities in which we could do multiple interviews. But a lot of times there were interviews with people who lived in very remote areas, so that began to add up.”

What is more, Poland found himself in the throes of a continually changing project as he delved further and further into his investigation of American food culture: “We would feel like we would be almost done and then we would have one more interview that would open up doors for topics that we thought we really needed to get into. We’d hear about topic x and we look into that item, whatever it would be, which would lead to something else.”

Carb-Loaded wrapped filming in May of this year, allowing the documentary to enter an equally important and similarly time consuming stage of production, that is, animation, motion graphics, and the composing of the documentary’s soundtrack.

“We wanted the film to be entertaining,” said Poland, “Animation and graphics were important.” The trailer for Carb-Loaded officially released June 5th showcased the film’s quirky animations alongside some engaging snip-its of interviews, visually stunning B-roll footage, and Poland’s own compelling narration, all set to upbeat rock music.

So, how has making Carb-Loaded affected Poland? First and foremost, he has developed a better understanding of what he can eat. ‘I’m not afraid of fat anymore,” he told us, “I’m fine with naturally fatty foods.” Further, Poland’s investigation into the problematic aspects of American food culture has led him conclude that reevaluating what you believe every now and then is not necessarily a bad thing: “Too much of a good thing is still too much. We need to make sure we go outside once in a while. Does it change our beliefs about the world that we live in or does it reaffirm what we believe? If it reaffirms [what we believe] then it may not be as healthy as something that makes us reexamine what we believe.”

To those indie filmmakers looking to make their first feature, Poland can share two very important lessons that he learned from making Carb-Loaded. First, “Do your homework. You’ve got to know your subject forward and backward. Not just the topic but the technical ins and outs, from equipment to the final technical specs to the delivery.” And second, “You don’t have to sell the cow when it comes to your film. Be smart and make sure you don’t sell your rights too quickly.”

Having successfully completed his first feature-length documentary, Poland plans to take what he’s learned and start working on another documentary, one that is probably not food related. Carb-Loaded: A Culture Dying to Eat will premiere at The Ridgefield Playhouse in Ridgefield, Connecticut on September 27th.