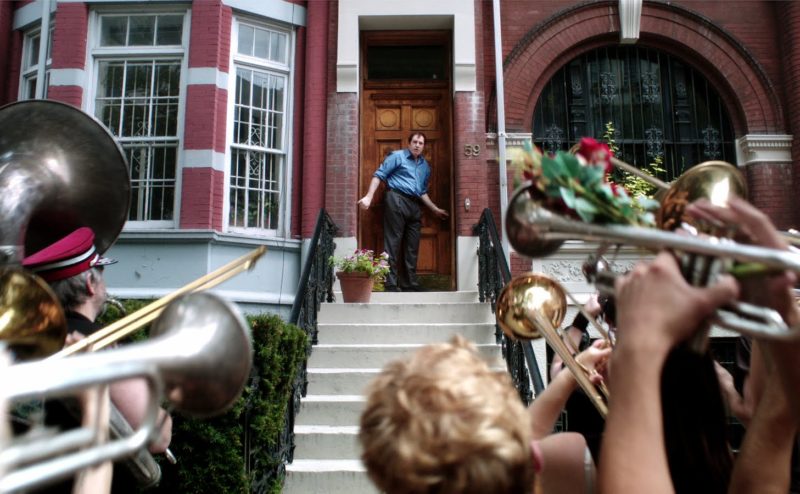 Music in Film: Providence’s What Cheer Brigade to be Featured in Rhode Island International Film Festival

Share
Director Michael Slavens addresses this idea of being overcome by grief in his new short film, What Cheer?, which features music from The What Cheer Brigade, an award-winning and beloved 19-piece brass band originating from Providence, Rhode Island.

The depression that often accompanies a sudden loss of a loved one has an irritating little knack for clinging to the people left behind. For some it is easy to walk away and move on from the loss after a period of grieving. But for others it seems like the loss not only lingers about too long but is loud and upfront, demanding to be noticed.

Director Michael Slavens addresses this idea of being overcome by grief in his new short film, What Cheer?. With the inclusion of music from The What Cheer Brigade, a 19-piece brass band and physical gags to lighten the mood, Slavens decided to put a poignant spin on the normally somber and heavy topic, offering the audience a new perspective on how loss can lead to isolation from the world around you.

“The idea of the noise in your head was the idea I wanted to explore,” Slavens said. “It just so happened that it fit perfectly with the What Cheer Brigade.”

The What Cheer Brigade plays the physical embodiment of the protagonist Stan’s sadness. The film features music played by the Brigade as they follow Stan through his daily life, demanding his attention at all times. They musically narrate all of the ups and downs of his experiences from a drunken night through his moments of clarity when he is finally able to break free from the band’s hold.

“I started listening to all their tracks and writing around the songs,” Slavens said. “I wanted the music to match emotional story points.”

Slavens first encountered the What Cheer Brigade through friend, Rob McKinnis, who was a part of the band. Tentative to attend at first, Slavens was soon enraptured by the band’s “explosive” performance and their ability to make such powerful music. After his first concert, Slavens soon became a regular attendee at their shows and always held the thought of working with them in a film in the back of his mind.

“When the What Cheer Brigade took the stage I fell in love instantly,” Slavens said. “I was just really moved by the music and immediately I knew I wanted to do something with them but I wasn’t sure what it was going to be.”

Dan Schleifer, a member of the Brigade, served as the primary liaison between Slavens and the band. He said that the band often receives requests for appearances and guests spots but are always “dubious” about them due to the members’ busy schedules. But when Slavens approached them with the film idea and revealed that actor, Richard Kind, would be the lead role. The Brigade realized how serious Slavens was about making a filming with them and they agreed.

“The idea of having a marching band, sort of a punk marching band, who comes up with that?” said Richard Kind, who played Stan in the film. “The guys in the band, they were great. They were so much fun.”

Before filming began, Schleifer and Slavens met a number of times to figure out which songs should be played during different scenes and how to maintain the strong musical presence even as the band members begin to dwindle in number towards the end of the film.

“Michael and I worked pretty closely together to figure out which songs would be the best fits for which scenes and there were a couple considerations that went into that,” Schleifer said, “I must have watched the storyboard for the film maybe thirty times just figuring out how to fit our songs in.”

Since the film began appearing at festivals internationally and domestically, both Slavens and Schleifer shared that the most gratifying moments for them were when audience members after the showings would approach them and share their personal stories and how they really appreciated Slaven’s representation of grief.

“People have actually said that it really kind of manages to capture some of that feeling of grief and that’s actually something I wasn’t expecting,” Schleifer said. “I thought of the movie as a comedy and there are some comic moments but it’s actually more of a sweet movie.”

Although it was Slavens who created the idea and premise of the film, he gives a lot of credit to the Brigade and hopes that with this film he will be able to introduce more people to the band and encourage them to check them out and appreciate their music as much as he does.

“I just hope that people enjoy the film and that they get to know the What Cheer Brigade a bit better because they are just an amazing experience,” Slavens said. “They have so much energy and they just explode off the stage. I want everybody to see them live. I can’t sing their praises high enough.”

The short film What Cheer? will screen twice on August 8, 2014 as part of the Rhode Island International Film Festival. See http://riff.festivalgenius.com/2014/films/whatcheer_michaelslavens_riff2… for screening details.

For more information and upcoming performances of The What Cheer Brigade, see http://www.whatcheerbrigade.com/.