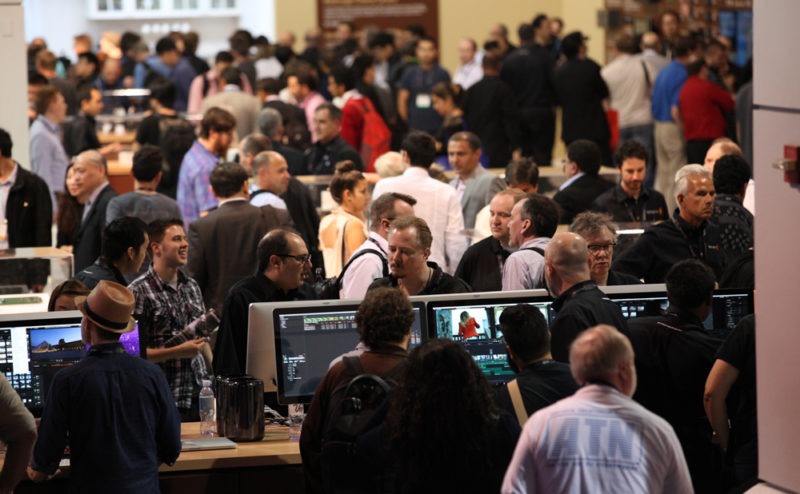 Tech Talk, Networking and a Host of Parties: A Report from the 2014 NAB Show

Share
With acres of exhibit space showcasing the latest in broadcast technology, around 90,000 attendees and a dizzying array of informational sessions, saying NAB is “overwhelming” is an understatement. Here, writer Maud Dillingham provides her first-hand report of tech developments, distribution insight and the networking (aka partying) that made up this year's annual show of the National Association of Broadcasters (NAB).

No number of informational blogs advising you to pack extra socks can prepare you for that behemoth of trade shows, the National Association of Broadcasters Show (NAB). With acres of exhibit space showcasing the latest in broadcast technology, around 90,000 attendees and a dizzying array of informational sessions, saying NAB is “overwhelming” is an understatement. The only thing I can compare it to is New York City’s Times Square, where people who are not used to walking or sharing the sidewalk either get in your way or mow you down.

I started gently with a press event at the Wynn Resort, where there were only a handful of exhibitors (such as Ericsson, plugging a prototype of a social-media-integrated TV) and a manageable number of people. I got some food and asked a friendly-looking woman if I could join her at her table, and she obliged. I learned that her name is Shahar Boyayan, she hails from Salt Lake City, and she has her own channel called Buzz & Biz on Roku. Soon we were engaged in a conversation about disruptive media and over-the-top boxes (OTT) such as Roku.

Boyayan told me, “My audience is extremely loyal and interested in what I have to say. It’s more important to be talking to the right people than a lot of people. It’s extremely targeted. It’s the nature of this type of content. The broadcast industry can joke about it all they want but they can’t change behavior. They will have to find ways to monetize multi-platform distribution.”

I heard echoes of Boyayan’s points the following day at the session entitled “How OTT is Changing the Value Chain and Revenue Opportunities” given by Patrick Lopez, Founder and CEO of Core Analysis.

“The penetration of broadband is in 70 percent of households,” Lopez said. “OTT delivers TV over the Internet. If content is king, content rights are the crown jewels,” he went on. “The consumer is at the center of the circle of value. The consumer is in control. You need to own the content, have the means to deliver it, and own the rights; you need to own the entire value chain. The disruption has been in the way content is being delivered.”

After NAB I caught up with attendee Kanen Flowers, creative director of ThatStudio, a global, online production and visual effects studio that also handles distribution. “With camera prices dropping and software becoming affordable for everyone, micro-distribution of original content is the next frontier,” Flowers said. “Earlier this year, we partnered with Rampant Design Tools to create Indie Essentials in an attempt to have some of the post production work be easier and at a lower cost for indie filmmakers. If we can get the price of delivering an original television show to under $25,000, with a production budget of the same, we can see 50 percent or greater margins with a built-in, albeit small audience.”

Flowers said he is most excited about direct-to-iTunes. “We saw amazing films like Upstream Color go direct to iTunes, without a studio behind them, but — imagine if the studio was part of the brand and had a wider audience for all the features pushed into iTunes. I believe there’s a market for curation, even in iTunes. It does require some level of education, though.”

“Distribution is such a loaded word,” Flowers concluded. “I would prefer if we said ‘delivery’ instead. There are so many ways to deliver content and make a living doing it — I’d consider thinking about non-traditional ways of delivery, which focuses on your fans, not on the traditional ways of distributing content.” Bottom line, Flowers said: “I would try very hard to think about creating the best film possible and try not to focus on distribution until the film is ready for it. Story wins, always. Fans will come later.”

I got to hang out with the cool crowd thanks to an inside tip from SuperMeet (more on that later) impresario Dan Bérubé about a press event for Blackmagic Design. First thing on Monday morning after the show floor opened, a nearly salivating audience of gearheads listened raptly as CEO Grant Petty debuted the Blackmagic URSA 4K camera designed for feature films, episodic television, documentaries, music videos and more. (If NAB had a buzzword this year it was 4K, a term for display devices or content having 4,000 pixels of horizontal resolution.)

Petty’s enthusiastic and encyclopedic presentation demonstrated his knowledge of and passion for his company’s products. “If you show up on the set with this camera, no one will question that you are a professional,” Petty said, perhaps causing a pang of regret in early adopters of the much smaller Blackmagic Cinema Camera which preceded the URSA.

That night was the Adobe party, where I met a lot of post-production folks. At that point I was still feeling “overwhelmed” and was polling people about whether they felt the same way. Most people I talked to had little use for Vegas and agreed that the show itself could be overstimulating. There seemed to be a consensus that the best thing about NAB is getting together with all the industry friends you haven’t seen all year.

Tuesday I dove back in to the show floor. The immense Canon booth was a showplace, with an exhibit of historic innovations and lenses, a movie theater, and a live production studio. A documentary about the making of “Need For Speed” showed various Canon cameras that had been used to shoot the movie.

The Avid booth was packed every time I went near it, abuzz about “Avid Everywhere” – the company’s new and upgraded solutions for audio production, professional editing, multi-platform content distribution, on-air graphics production, and asset management. Mark Sanger, the Oscar-winning editor of “Gravity,” created Twitter traffic with his talk at the Avid booth.

The aforementioned SuperMeet took place Tuesday night and was sort of a tent revival for camera and editing geeks, where there were raffles of things like a DaVinci Resolve color correction and editing system with a full DaVinci Resolve Control Surface. If you had to buy it, it would set you back just under $30,000. During the system’s demo on a gigantic screen, the audience was in paroxysms of excitement. I’ve never heard a room of introverts cheer so loudly.

Wednesday was the day that I, as a video editor, had been looking forward to, when WGBH editor Steve Audette gave a talk about documentary editing. He made some excellent points about documentarians needing to keep the audience in mind. “Be true to the context of your story,” he said, “but make it compelling for the audience.” He also had no qualms about criticizing the observational style of documentary, noting that “no vérité film has ever won an Oscar.” He cautioned, “Don’t make your films for some charming aristocracy.”

A good example for the stamina you need to get the most out of NAB: Audette told us he had attended the AJA company’s legendary annual dance party the night before his talk. “I was dancing like an 18-year-old,” he said. And he managed to get up the next morning and deliver a fascinating presentation. That was NAB in a nutshell: be professional, but don’t forget to have fun.