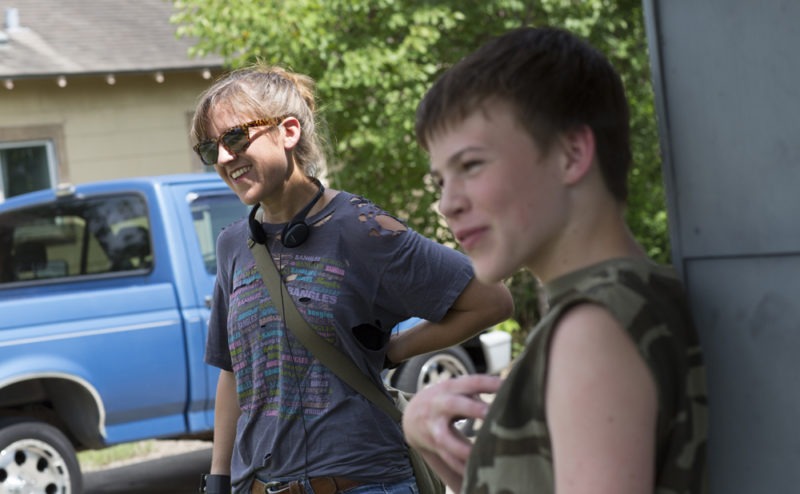 Talking with Kat Candler, Writer/Director of Hellion, Recently Picked Up By Sundance Selects

Share
Writer/director Kat Candler of Hellion, a feature staring Aaron Paul and Juliette Lewis, offers advice on making short and feature films, planning for distribution and how to 'always be a student.” Hellion, which screened at Sundance and has been picked up for distribution by Sundance Selects, screened at this recent 2014 IFFBoston.

This testosterone-fueled story of angst and grief depicts an East Texas family torn apart by the death of their mother. Their father, Hollis Wilson, played by two-time Emmy winner Aaron Paul, finds himself unable recover from the loss as he tries to care for his two sons, 13-year-old Jacob, played by Josh Wiggins, and his younger brother, Wes, played by Deke Garner.

Jacob rides his motor cross bike, lights things on fire and gets arrested as he does his best to shake his sadness, only to find himself in a detention school and just one wrong move away from a juvenile detention center. When word gets around that Jacob is beginning to involve Wes in his shenanigans, Child Protective Services steps in. They arrive unannounced and inspect the messy house, taking note of the fact that their father isn’t home and young Wes has been left in the care of a 13-year-old hellion (who dines on peanut butter, Redi-Whip and white bread while he feeds his brother a ham sandwich.) With a few clicks of a pen, CPS promptly awards Hollis’ sister-in-law, Pam (played by Juliette Lewis) custody of Wes. Authorities warn Hollis he must meet every court date, attend a weekly counseling session and stop drinking if he hopes to regain custody.

Unfortunately, this is a world where the downtrodden can’t catch a break. Despite his best intentions, Hollis can’t meet every requirement and even with his most desperate attempts bring his family back together, Jacob’s efforts spin horribly out of control. Josh Wiggins’ performance is honest, real and beautiful – it’s difficult to imagine an inexperienced teenaged actor sharing a spotlight with Aaron Paul and sometimes stealing it, but he does – although Aaron Paul and Juliette Lewis hold their own in emotionally heart-wrenching performances. With a cast of troublemaking teens with the kind of rage, angst and underlying sadness we haven’t seen since Stand By Me, Candler paints a hauntingly beautiful picture of life in a small East Texas refinery town.

Hellion made its premiere at Sundance and was based on the short film with the same title that premiered at Sundance and IFFBoston in 2012. Hellion was developed in part by the Sundance Institute Feature Film Program, where Producer Kelly Williams was a 2012 Creative Producing Lab Fellow with the project. Since its premiere, the film has received rave reviews and has packed audiences in film festivals throughout the country. The film acquired distribution via IFC’s Sundance Selects and will be released on June 13th. It’ll come out in theaters and on Video on Demand. The packed screening at the Brattle Theater for IFFBoston made it easy to note the audience’s rollercoaster of emotions—cheers, hushed murmurs of fear and sympathy for Jacob as the story came to its climax.

“I’ve always been drawn to stories of youth,” said Candler. “I’m fascinated by good kids doing bad things. I’ve read Lord of the Flies countless times and the 1963 movie is one of my all time favorites. I’ve worked with at risk-kids at alternative schools and taught film production to all grades levels. I want to give voice to not only this struggling single father, but to the kids that wander the small town streets in search of adventure, respect and understanding. And with Hellion I’m excited to bring all of these characters I fell in love with two years ago to the screen – their heartbreaking mistakes, their poor choices and their good hearts.”
As this month’s NewEnglandFilm.com issue focuses on distribution, I asked Candler what advice she has for filmmakers regarding distribution. “First and foremost,” Candler said, “tell a great story.” Candler’s advice to independent filmmakers is to “keep your budget as low as you possibly can early on, because the reality of what you’re going to make back or if you make anything back isn’t always a pretty picture. Be smart about other people’s money.”

Kat’s unique background as a creative writing major makes her journey from unsure student to Sundance success all the more inspiring. “I went to Emerson College my freshman year to study acting,” said Candler. “I lasted one semester for lots and lots of reasons. But ultimately I realized the acting thing wasn’t for me. I retreated back to Florida and ended up at Florida State where all my high school friends were. It was just chance that I ended up in the writing program. Two of my best friends were studying writing so I was like, ‘I’ll do that too.’ Little did I know I’d fall in love with it. I sucked at poetry, enjoyed short fiction, but really loved playwriting. After I wrote a one-act play my professor suggested I look into screenwriting. That coupled with working at a movie theater from age 15 all the way through college, I found myself realizing I could make movies. I’m glad that my foundation was in writing. But it took me a while to catch up on how to tell a story with a camera, lights and sound because I didn’t go to film school.”

Candler moved to Austin in 1997 and soon began making short films. “Making short films is an easy and cheap way to hone your skills. My skills needed some serious honing at that time. Making shorts can teach you how to tell a concise story in a short amount of time. It can allow you to experiment, take risks, play without the pressure of a feature film on your back. It’s like grabbing your friends and heading down the playground.”

Candler had a lot of talented friends to learn from on that playground. ‘My early mentors were my peers. I grew up with filmmakers like the Zellner brothers, (whose film Kumiko, The Treasure Hunter also screened at this year’s IFFBoston) Bryan Poyser (Lovers of Hate, Love and Air Sex) David Lowery (Ain’t Them Bodies Saints), Heather Courtney (We Were Soldiers) Yen Tan (Pit Stop) and so many more … we were all incredibly supportive of each other and each other’s work. I think that’s what makes Austin and Texas so unique and so special. We’ve all grown up together and everyone’s having such amazing success right now. It’s really sweet.’

Candler’s advice to filmmakers? “I think there’s wonderful beauty in being naïve when you’re starting out. Anything’s possible. And you will try to leap tall buildings when maybe you don’t realize how tall the building is or the protocol of how to leap. I loved that I didn’t know what I know now. It gave me great hope and grit. I think if I could tell my younger self anything it would be to study as many films as possible. Just study, study and study more. To always be a student. Never ever think you know everything because that’s when your work suffers.”

Kat Candler’s most recent short films Hellion (2012) and Black Metal (2013) both premiered at the Sundance Film Festival. Additionally, her previous films have screened at the Los Angeles Film Festival, San Francisco International Film Festival, SXSW, Slamdance and on PBS. She is a two-time IFP participant and was recently awarded the San Francisco Film Society/Kenneth Rainin Foundation Filmmaking Grant. Candler is also a film Lecturer at the University of Texas at Austin.

Kat Candler's most recent short films Hellion (2012) and Black Metal (2013) both premiered at the Sundance Film Festival. Additionally, her previous films have screened at the Los Angeles Film Festival, San Francisco International Film Festival, SXSW, Slamdance and on PBS. She is a two-time IFP participant and was recently awarded the San Francisco Film Society/Kenneth Rainin Foundation Filmmaking Grant. Candler is also a film Lecturer at the University of Texas at Austin.