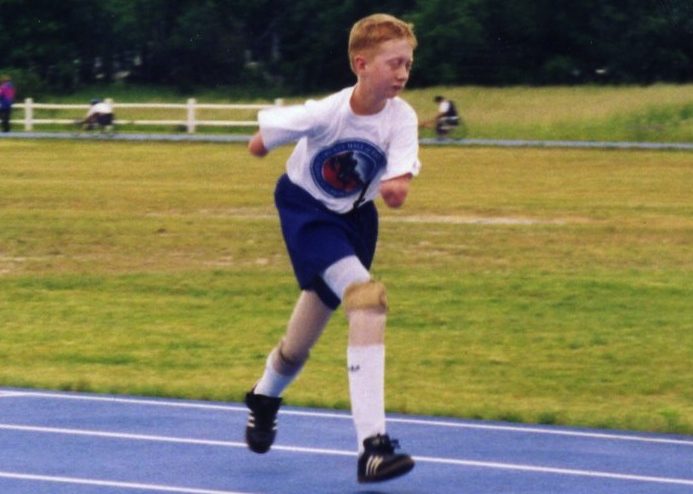 Share
It all started when Rhode Island filmmaker Christian de Rezendes got a call from his colleague Paul Plotkin. Paul had been hired by a client to transfer old VHS home movies to DVD—an ordinary task—but as it turned out, this was no ordinary client...

It all started when Rhode Island filmmaker Christian de Rezendes got a call from his colleague Paul Plotkin. Paul had been hired by a client to transfer old VHS home movies to DVD—an ordinary task—but as it turned out, this was no ordinary client. Paul became immediately riveted by the footage that follows Matty Christian from birth to adulthood. When Christian saw the footage, he knew immediately “from the very first image” that he needed to make this film. The result is Raising Matty Christian, a story about a boy born without any limbs or tongue who always found a way to inspire those around him.

The film will premiere at the Arizona International Film Festival in Tucson on April 13 and will also screen in Rhode Island as part of the Southeast New England (SENE) Film, Music & Arts Festival on Saturday, Aprils 26 at 5 pm at the Columbus Theatre in Providence. NewEnglandFilm.com staff chatted with Christian before the screening to find out more about how the film developed.

NEF: What was it about Matty Christian’s life that made you know this was a story you needed to tell?

de Rezendes: I knew I had to make the film when Paul showed me the first video image of Matty [a shot of him running across the beach despite his lack of limbs], which incidentally opens the film. It’s rather jaw-dropping at first, but you see Matty’s determination and unawareness at that age of how different and special he is. There’s an innocence and a great unknowing for all of us at that age. That put together with the man he grew into being and what his life meant to so many during his living years and after his passing is quite profound.

NEF: How many hours of home videos did the original footage include and how did you log it or choose what to use?

de Rezendes: I combed through just under 12 hours of footage. I don’t know exactly how much Paul edited down or what he had to start with, but he always said he took very little out.

NEF: Can you talk a bit about the shooting/editing process? Did you all the interviews and then sit down and edit the footage and interviews together?

de Rezendes: First, I combed through all 12 hours of the home video footage and made important notes using time code. That was pre-production, so I could familiarize myself as much as possible with the footage. Then we scanned at least 400 images for the film, most of which were preserved and shared by the Christian family. Then we decided who we would interview and began scheduling. After the interviews were filmed, I edited them down. Each subject had their own sequence. This was done as we went forward, person by person.

Then about one year ago, I was struggling with exactly how to structure the film. One night I was in a group where people were meditating, which I don’t usually do but probably should! I sat and focused, and two major things came to mind: first, the use of the opening shot and introducing Matty to the audience in the same way that I was. That became a doorway in. And second, the use of quotes throughout the film that broke the story into theme-based segments. Those two things got me going back to the film feeling more assured and on a solid path.

I then did what I call ‘combination editing,’ in which I began to create new sequences based on topic and compiled all talking heads into these sequences based on what they were talking about. The first cut of that was 3 1/2 hours. The second was 2 1/4, and that’s what Allie and Jerry Christian family eventually saw.

Once that was done, I returned to the home movie footage and did the same thing by place specific clips, photos, articles, TV news story pieces, etc. in relevant sequences. This part of the process is never solid, and it constantly fluctuated as I moved forward, but it was the clearest way for me to get a grasp on the whole story and start to weave this into a solid film.

NEF: I noticed in the interviews, you often had more than one camera — can you talk about how you set up those shots and what cameras/crew you had for the interviews?

de Rezendes: It is. From the outset, we made it clear that we had to deal with Matty’s passing very openly, and they were quite brave and open in dealing with it. As they continued to mourn his passing, I would be working on the film and asking questions, requesting pictures, scheduling shoots and other details. Sometimes this was therapeutic, and other times, I’m sure it was painful. So I worked very closely with them in the process.

Editorially, there were certain things that would need to be tweaked or clarified along the way. But they left me to do the work—to work through the footage, form the narrative and determine exactly what went where and why. Occasionally I might have gotten a question about why something was included or omitted or if I happened to catch a certain detail, and most of the time, I have solid answers for those things. It was a solid collaboration in terms of content, the chronology and key points of Matty’s life. The biggest relief was their reaction to the first solid cut of the film, which went over tremendously well.

The film will screen at the Arizona International Film Festival (www.filmfestivalarizona.com), the Disabilities Film Festival (www.disabilityfilmfest.org) and the SENE Film, Music and Arts Festival in Providence, RI (www.senefest.com) in April 2014. For more information, visit http://www.raisingmattychristian.com/.

The film will screen at the Arizona International Film Festival (www.filmfestivalarizona.com), the Disabilities Film Festival (www.disabilityfilmfest.org) and the SENE Film, Music and Arts Festival in Providence, RI (www.senefest.com) in April 2014. For more information, visit http://www.raisingmattychristian.com/.