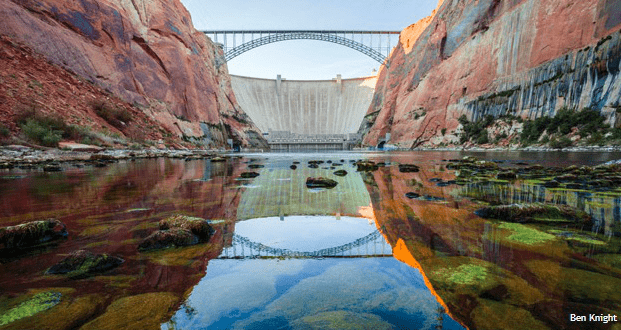 A River Runs Through It: A Report from the DC Environmental Festival

Share
The theme of this year’s DC Environmental Film festival could have very easily been taken from the classic film A River Runs Through It, directed by Robert Redford starring a young Brad Pitt. Light-filled rivers and waterways wended thematically through a plethora of multiplexes, art houses and luxuriously situated museum auditoriums throughout the metropolis.

The theme of this year’s DC Environmental Film festival could have very easily been taken from the classic film A River Runs Through It, directed by Robert Redford starring a young Brad Pitt. Light-filled rivers and waterways wended thematically through a plethora of multiplexes, art houses and luxuriously situated museum auditoriums throughout the metropolis.

“This year’s theme, “Our Cities, Our Planet,” included films on organic farming, the toxicity of air pollution. We [also] got into rural issues, focused on oceans, [and] the climate,” said Bill Stetson, director of External Affairs for the festival. Stetson, founder of the Vermont Film Commission, serves on the President’s Advisory Committee on the Arts. The characters on the big screens were heroic. Their stories, about the impact of the human species on the earth, visually unfolded through 200 films from 38 countries.

“It’s this multicultural driven effort to include this entire part of Washington, D.C. We try to be balanced. While we sway toward natural advocacy, we are not the Green Peace of film,” said Stetson. The $10,000 award, received by the DamNation filmmakers Travel Rummel, Ben Knight, Matt Stoecker and Beda Calhoun, can help make more meaningful filma. “It’s what you dream,” said Stetson, who produced the award-winning PBS documentary A Closer Walk about the AIDS epidemic and co-founded Creative Coalition with Alec Baldwin, Susan Sarandon and Robert F. Kennedy, Jr.

Nearly 32,000 flocked, with a skeleton staff, hundreds of volunteers likened to a mini-United Nations, to witness our planet’s story and the “needle moved” Stetson said. In April, a Google-sponsored town-meeting, at its Hangouts, will give the faithful another opportunity to convene, albeit virtually.

Two new awards were inaugurated this year. The Documentary Award for Environmental Advocacy, was won by DamNation, a film that makes the river as riveting as the colorful characters who seek to restore its waterways as nature intended, such as the dam removal story of the Penobscot River in Maine. The Eric Moe Sustainability Film Award recognized Amazing Grace, a short film about the deforestation of Zambia and one man’s journey to save it.

Another film, Ocean Frontiers II: A New England Story for Sustaining the Sea, shows how various community and regional actors dealt with the “massive decline of New England fisheries,” according to Dr. Brent Blackwelder, president emeritus of the Friends of the Earth. Blackwelder has attended the festival for most of its 22-year history. “But the movie did give you a picture of where they are and what needs to be protected, especially in the Cape Cod region.”

“From the past two centuries, the great Cod fisheries have become nearly extinct. The threats to shellfish combined with bad practices reduced the populations,” he said. He notes that the film documents the historic collaboration between the fisherman, the native population and the government, even as new industries like wind, offshore drilling and natural gas are considered.

Filmmakers Jennifer Baichwal and Edward Burtynsky’s collaboration, Watermark, explores a certain important resource: water. Other films highlight the history of preservation of wildlife and its natural habitats, wins and losses.

Attenborough: 60 Years in the Wild, Our Fragile Planet depicted the alternatively poignant and humorous journey of Sir David Attenborough from an inexperienced but curious adventurer to renown documentarian dedicated to saving at-risk species from the blue whale, Galapagos tortoise to orangutans. The film shows how media can raise the stakes saving one species at time. Compelling footage of vanishing ice-covered mountains, even as our planet warms, are reminders the clock still ticks.

“Many films show the beauty of the earth in which we live. Of course there is personal inspiration and personal motivation, many films portray the incredible injustice in pollution across the globe,” said Blackwelder.

Once Upon a Forest, from France, had its U.S. premiere and received the Polly Krakora Award for film artistry. It chronicles the journey of botanist and ecologist Francis Hallé to the Peruvian Amazon to the 700 year old “green lung” of the world.

The festival also looks at new environmental issues and their characterization by filmmakers become catalysts for advocacy. Attendees use film websites, Q&A, and informal networks. DC Environmental Festival’s reach extends far beyond its perennial scope. By partnering with other festivals like the White River Junction festival and art councils, they share groundbreaking docs. Staff and volunteers work with the local DC audiences to present festival events that highlight community involvement like the historic Anacostia River cleanup.

It’s a festival with a conscience. Electric cars carry guests around town and to airports, including Robert Redford in a Volt, one year.

The film DamNation will also screen at the upcoming Newport Film Festival in Rhode Island on April 15, 2014 and the Environmental Film Festival at Yale University, on April 5, 2014.