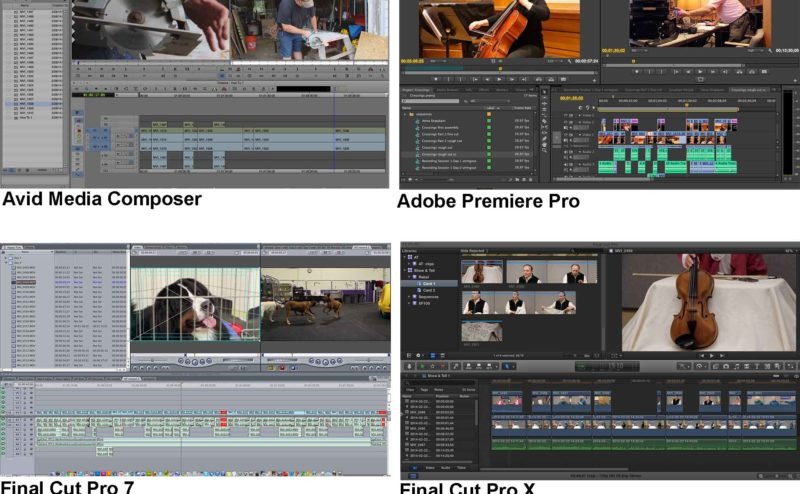 With the emergence of Final Cut Pro X, Apple continues to make converts out of Avid Media Composer and Adobe Premiere editors, but every editor has their preferences, and their reasons for them.

Ever since Apple sent shockwaves through the film and video editing world in 2011 by completely reworking its popular Final Cut Pro program, a reshuffling has been happening in terms of which non-linear editing systems (NLEs) professionals are using. (Unlike earlier editing technology in which film would literally be “cut” to make an edit, an NLE does not modify the source material. Computer-based non-linear editing was popularized by Avid in the early 1990s.)

Apple’s revamped program is called Final Cut Pro X – officially pronounced “ten,” although some people say “x” – and bears more than a passing resemblance to the home-movie maker iMovie. It has a futuristic, aesthetically pleasing interface and a “magnetic timeline” that is easy to use. When Final Cut Pro X debuted, industry experts said the program was missing much-loved features from Final Cut Pro 7, like a multi-camera editing function.

Out of the gate, aficionados of Final Cut Pro 7 either embraced Final Cut Pro X or stuck with the familiar version 7. Still others switched to Avid Media Composer or Adobe Premiere Pro.

In December 2013, the Final Cut Pro X 10.1 update caused another game change. New (or restored) features, such as multi-camera editing, have created excitement, wooing former Final Cut fans back into the fold and attracting new users eager to learn the technology. One thing that has people talking is the way the program makes use of the dual GPUs (graphics processing units) for ultra-high resolution 4K footage in the new Mac Pro computer.

Ben Consoli, director, videographer, editor and owner of BC Media Productions and a presenter at the Boston Creative Pro User Group (BOSCPUG) February 2014 meeting, demonstrated some of Final Cut Pro X 10.1’s features to rapt attendees on a new Mac Pro. “Version 10.1 is proof that Apple is committed to this program and is listening to its audience,” Consoli said.

“One thing that’s tough, is that two-and-a-half years after Final Cut Pro X came out, I feel like I have to defend it all the time,” says R.J. Placko, non-linear editor, visual effects and motion graphics artist, colorist and Apple Certified Master Trainer, and Associate Director of the filmmaking program at Boston University Center for Digital Imaging Arts. “For anyone who has been resistant to it, now would be the time to try it out. Features that were missing have come back: dual viewer, multi-camera, automatic syncing of dual system sound. They’ll say it doesn’t do this or it doesn’t do that. But it does now. It just takes a little throwing out your knowledge of the previous program, not throwing away your knowledge of editing or organization. Accept that it’s the new paradigm. Once you get past that, it’s pretty easy to pick up.”

Placko goes on to say, “As a freelancer, I get projects in all different systems — Premiere, Final Cut X, Final Cut 7. I don’t see a lot of Avid. From what I’ve seen, some are still on Final Cut 7. A couple of years ago, it was only Final Cut 7. When Final Cut X first came out, it had a lot of problems, they released it too early, and Final Cut 7 people bailed on it. Ever since then it’s been kind of all over the board. Final Cut 7 people have gone to Adobe Premiere. Some, like me, stuck through [X’s] updates. I started to use it on some short films that I edited. It’s the easiest and fastest to use. For me, the biggest thing is the search features, especially for documentary work and organization. I use Final Cut X, if I get my choice.”

Placko says, “Final Cut X is easy for people new to editing. I’ve found that my students have less technical hang-ups with X than with Final Cut 7.” He notes, “I learned Avid. I found it to be slower and clunkier to work with than Final Cut. I see so few projects on it that I never have gone back and brushed up on it because I haven’t needed to. I know in L.A., they use it a lot for narrative. It’s definitely more common than it was before Final Cut Pro X came out.”

Placko sums up, “Apple’s line of thinking was improved organization — going beyond the bin system, advanced search features. The timeline is the thing that some people are turned off from or don’t want to try out. It’s very flexible and it’s non track-based. But once you get used to it, I definitely move faster on it than I do with other programs. I teach workshops on both Final Cut X and Premiere. There are some things I like about Premiere, but not many. I just don’t find it as quick. It’s not about me knowing either program better. I think the organizational storage is the issue.”

Nick Papps, editor, sound designer, and owner of the Beautiful Module multi-media company, also enthused about Final Cut X after the BOSCPUG meeting. “I started on Final Cut X. It was really quick and clean for me. At $300, it’s the best bang for the buck. It’s so powerful, it seems like something no other company can touch right now.” However, he said, “Adding effects, I needed something seamless.” To that end, Papps noted that he uses Adobe Premiere for “dynamic linking” — seamless communication — with other Adobe programs such as After Effects, which is used to create motion graphics.

“I like the fact that lots of plug-ins are involved with Premiere,” Papps said. “I like not having to render out every time I do an effect. I like the communication between other programs and Premiere. Premiere has access to multiple areas, Final Cut Pro X is self-contained.” Papps said that while he used Avid in college about 10 years ago, “I never got it.” He stressed the importance of learning both Final Cut Pro X and Adobe Premiere Pro.

Julie Kahn is a color correction artist for broadcast television programs, as well as an editor. She is known as the “Avid Diva” (she notes that Diva is Avid spelled backward) and has been editing with Avid Media Composer for years. On the subject of Final Cut Pro X, she says, “You’re talking to someone who has never touched Final Cut Pro X. I just haven’t needed to. There are some people I know who, once they get going on it, they like it.” To Kahn, Final Cut Pro X “looks so totally different, not really the way to keep your fan base going. But [Apple] wanted to get people moving from iMovie to something else. I know some very experienced editors who love it.”

Kahn continues, “It may depend on the type of project you’re doing. That’s also been a sort of a Final Cut versus Avid thing. If you’re editing a long-form, multi-episode television program, would you rather do that on Final Cut or have the media management of Avid? You need to be able to access things, find where they are, and AVID does that pretty well.” The sophistication and robustness of Avid’s media management system are well respected in the industry.

Kahn adds, “I also love the Avid trim mode, to make trims very fine.” Indeed, some say all other NLEs are like editing with hedge clippers compared to the dynamic trimming ability of Avid Media Composer, which allows the user to trim minutely “on the fly” while the footage is played back repeatedly.

Kahn says, “I’ve always preferred Avid. It’s kind of what I’ve grown up with. Whenever I have to do something, the Avid makes it happen fast and I don’t even have to think about it. I guess I have a bias. I don’t think it’s a bad bias; it’s what the clients that I work with use. Most of my work I do at their location. Certainly in the Boston market and Los Angeles market – most series that I know of are cut on Avid. For corporate and educational work, there’s a lot of Final Cut stuff out there.” Kahn says of working on television shows, “If you’re going to try to get into that world, you’re going to need a working knowledge of Avid.”

The bottom line for Kahn is that “the tools are only part of the equation, they’re whatever you’ve been given to work with. If you can edit, you can do it with any program. The tools can only do so much: You still need your skill and talent and the history of what you’ve done to get you where you are.”

Kahn concludes, “Just because someone can use the tools does not make them an editor or a colorist. The tool is just the means to get it done. It’s about telling the story — which doesn’t change with the program you’re using.”

Ultimately, the software an editor chooses to “cut” with is a combination of preference, experience, the demands of the project and the expectations of the client. The more established you are, the more control you have over which software you will use. For those who are up-and-coming, flexibility is the name of the game, and the more programs you know, the better.