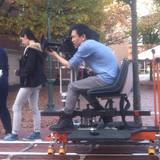 Share
Every month, NewEnglandFilm.com highlights new local film projects looking for funding via crowd-sourcing. This month, we are featuring two campaigns, both out of Rhode Island - Best Judgment: Ladd School Lessons, on Indiegogo, and Sunflower, on Kickstarter. To feature your film in this series, e-mail editor@newenglandfilm.com.

Rhode Island School of Design student Edward Choi is looking for support for his senior thesis, the narrative short film Sunflower. Inspired by his grandparents’ personal experiences, the film will explore Alzheimer’s disease and the idea of memory.

Sunflower follows Charles Newman, an elderly man visiting his wife, Susan, in the hospital. As Charles experiences vivid memories of major events from his life, he comes to realize that he has Alzheimer’s. Choi explains on his Kickstarter page that his relationship with his grandparents, both dealing with Alzheimer’s, inspired this film and made him want to “think of Alzheimer’s differently than a disease.” Although difficult for their families, what if, he wondered, “the person who is suffering Alzheimer is not actually suffering. It could be that it is their last chance to revisit some of their memorable moments in life before passing away.”

Choi’s goal is to raise $4,200 by February 22nd. Donations will fund production costs, including food and transportation for cast and crew, props, equipment, and more. The film will screen at the RISD senior showcase in May. To read more about the film, watch a brief video, and donate, visit the Sunflower Kickstarter page.

Rhode Island filmmakers behind the upcoming documentary Best Judgment: Ladd School Lessons seek support through Indiegogo. The film will focus on the history of the Ladd Center and the changing, different attitudes faced by people with developmental disabilities over time. The film will be partly produced by individuals with developmental disabilities, including former Ladd Center residents.

The Ladd Center opened in Rhode Island in 1908 as a school for individuals with developmental disabilities, but its original name – “The Rhode Island School for the Feebleminded” – highlights the cruel, insulting, and misguided attitudes its residents faced. It may be over a century later, but the goal behind Best Judgment: Ladd School Lessons is to remind its audience that society still has improvements to make in how it treats individuals with disabilities. As the film’s Indiegogo page explains, “…there is still a stigma attached to people who have a disability label. They are viewed by many as different, separate, a burden on their communities, and unlikely to make any real contributions to society. For instance, few would believe that these individuals could collaborate in the making of a significant motion picture…” The goal is that Best Judgment will explore not only the history of the Ladd Center, but the lives of people with developmental disabilities and their experiences producing this documentary.

The film is being produced by Advocates in Action RI, Harken Productions, and the Down Syndrome Society of Rhode Island. It will be co-directed by first time filmmaker Bob Macaux and Oscar-nominated documentary filmmaker Jim Wolpaw. The goal is to raise $50,000 by February 21st. Read more about Best Judgment: Ladd School Lessons, the filmmakers involved, watch a short video, and donate at the Indiegogo page.