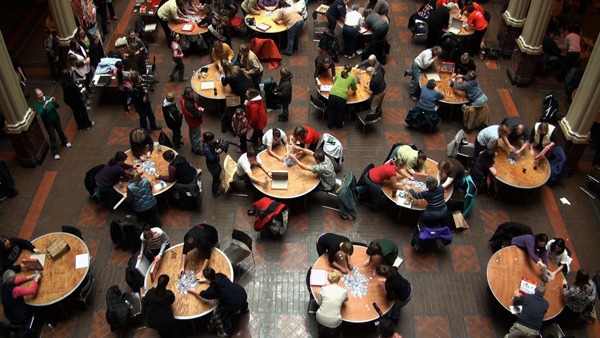 Share
Warm up this February with film festivals around New England. Check out the Industry News section each month for local films, upcoming festivals, and filmmaker opportunities. To submit news, e-mail news@newenglandfilm.com.

The Banff Mountain Film Festival makes its way around the United States this winter. This month, the festival will hold screenings in Connecticut, Maine, Massachusetts, and New Hampshire. For dates and locations by state, visit the Banff website.

The Camera Company in Norwood, Massachusetts hosts a Studio Lighting Solutions Seminar on February 4th from 10:00 am to 2:00 pm. Led by lighting specialist Jonathan Lipsy, the seminar will cover new lighting systems, techniques, and hands-on practice. Read more and register at cameraco.com/events. You can also attend a free workshop Introduction to the MoVI M10 Camera Stabilizer System at Rule Boston Camera on February 26, 2014 — see the Rule website for more information.

Check out the Boston Sci-Fi Film Festival, February 7th – 17th at the Somerville Theatre. This year the festival will host several guests including Buffy The Vampire Slayer‘s Nicholas Brendon, from Coherence, playing February 13th at 9 pm. For more information, go to: bostonsci-fi.com

The Salem Film Festival, an all-documentary festival in Salem, Massachusetts, is partnering with Montserrat College of Art in a new seminar about documentary film. The course is for educators and film enthusiasts. See the course on the Montserrat website for details.

Wicker Kittens, a local documentary by filmmaker Amy C. Elliott, born and raised in Connecticut, is going to SXSW, as part of the SXsports program. Wicker Kittens is about a jigsaw puzzle contest. SXSW added puzzle-solving in their definition of ‘sport’ to include the film in the festival. See the trailer and more information on the Wicker Kittens website or check out the SXSW website.

Harvard University’s Hasty Pudding Theatricals have named Neil Patrick Harris and Helen Mirren as their 2014 Man & Woman of the Year. Mirren’s celebration is on January 30th; Harris will be honored on February 7th. Read more about the awards at the Hasty Pudding Institute.

Oscar nominations were announced last month, honoring several nominees with New England connections, particularly American Hustle, which was shot in Massachusetts. Check out all the nominees. And, if you missed it, read the NewEnglandFilm.com profile of local cast and crew in American Hustle from last month’s issue.

Get an early start on submitting to this fall’s New England Underground Film Festival. Filmmakers are invited to submit films in a variety of categories. The festival will be held in West Hartford, Connecticut. Submission deadline is July 20th. Learn more at newenglanduff.webs.com.

Have a short film? New Hampshire’s Portsmouth Short Film Night is looking for submissions for this month’s event. Short films of all genres are welcome. Deadline is February 4th. Learn more and submit psfn.filmunbound.com/submissions.

Submit now to next summer’s Nantucket Film Festival. There are several film submission categories and screenplay competitions. The deadline is March 3rd. Learn more at nantucketfilmfestival.org/festival/submit.