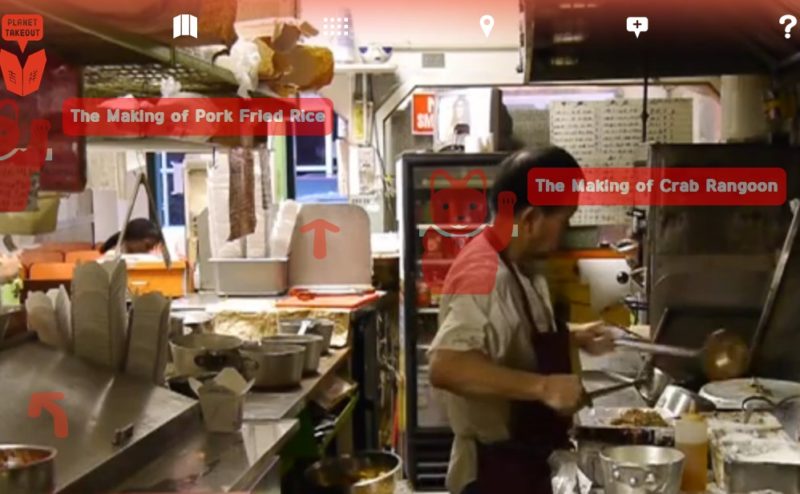 Planet Takeout: Documenting Both Sides of the Takeout Window

A few years back, while living in the Crown Heights neighborhood of Brooklyn, Val Wang found herself becoming a regular at one of the local Chinese takeouts near her home. For Wang the takeouts were the only place she could go at night to get a made-to-go meal with fresh vegetables. While waiting in line for her food, she found herself ruminating on the role these takeouts serve in their communities. How had these Chinese immigrants come to this particular neighborhood? What was the cultural exchange between the primarily black population of Crown Heights and the Chinese immigrants who owned and operated the takeouts?

These questions continued to percolate in her mind even after she moved from New York to Boston. She came to know the city as a patchwork of diverse, often working-class neighborhoods, each with its own local takeout, each revealing a cross-section of the various micro-communities within the city and the ways in which they intersect with global immigration patterns. A year later, these initial observations evolved to form the basis of Planet Takeout, a documentary Wang has since produced for the Localore project, AIR Mediaworks’ nationwide initiative to accelerate public media. But Planet Takeout doesn’t look like your typical documentary. It is an interactive website at PlanetTakeout.org to experience through your computer’s web-browser.

The documentary maps the city of Boston through its constellation of local takeouts and chronicles the stories of the people who work and eat at them. Upon entering the site, visitors are directed to follow arrows that are superimposed on to the screen. These links bring the viewer across the counter and inside the takeout kitchens where they hover around the frame with the computer’s mouse to discover stories .

Inside one takeout, one woman approaches the counter and asks, “Excuse me? In your food, you got MSG in there? I like it, I want MSG.” Long, almost voyeuristic takes like these from inside kitchens form the visual backbone of the website and immerses the viewer in to the rhythms of the restaurant, from the banter and flow of customers, to the ambient din of scraping kitchenware and droning ovens. The interactive, browser-based format allows viewers to navigate the stories in their own way, at their own pace. “Instead of sitting in a theater or at home passively watching a documentary from beginning to end, the viewer gets to move around in the space of the takeouts and explore what he or she finds captivating, versus me calling all of the shots,” Wang says.

Alternatively, visitors can survey all the website’s content at once via a comprehensive menu at the top of the screen, which serves up a medley of easily-digestible interview segments and fly-on-the wall video clips organized by recurring themes like the practical challenges of running a takeout, testimonies from regular customers, and the geography of the neighborhoods, along with the takeouts that define them. Most interesting are the segments in which commonplace events are emblematic of deeper social issues running through this working-class backdrop. For example, in “I Come Here Because I’m Homeless,” several homeless men describe their daily patronage of Hong Kong Chef and the unspoken contract they have with the restaurant’s owners. With the money they earn from panhandling down the street, these men can get an extra-heaping portion of chicken with rice and use the bathroom to wash up.

What truly differentiates this film, however, is its spirit of participation. Viewers can contribute their own stories by uploading media to Flickr, Youtube, Tumblr, or Soundcloud and tagging their content with #planettakeout. These user-generated images, videos, and sound bytes then automatically post to the site and populate collections with thematic titles like “Fortune,” “Childhood Memories,” “Neon” and “Lucky Cat.” This feature encourages viewers to reflect on their own experiences with Chinese takeouts, perhaps providing their own voice to the conversation.

With the maturation of social media and the growth of new, digital technologies, the last several years have seen a rise in this new form of interactive, often inclusive, storytelling. Initiatives, incubators, and labs to promote “transmedia,” “cross-platform,” or immersive storytelling have been undertaken by the likes of the Tribeca Film Institute, MIT Open Documentary Lab, the Sundance Institute, and the National Film Board of Canada.

Interactive pieces have also been featured on major news outlets and deployed by large brands. Often, these pieces incorporate intertextual elements or other devices that position consumers of the media as powerful players, even authors themselves. As a result of these reformations, the documentary is becoming a site for open and ongoing dialogue, a nexus for multiple voices rather than the vehicle for a single viewpoint.

Interactive documentaries, like Planet Takeout, stretch the limits of authorship by ceding some amount of control to the audience. Rather than tracking a clear beginning, middle, and end, these stories continuously branch off in different trajectories, offering the viewer any number of ways to chart their own course through the subject matter.

Crafting this kind of interactive experience requires a number of new techniques and technologies, an expanded arsenal that the traditional documentarian is unlikely to have on their own. Wang, who has a diverse background as a writer, television and website producer, and radio reporter, was well-suited to oversee the various demands of this multimedia project: “What once seemed like a hodge-podge of skills is now a valuable toolkit I drew on for this project. Basic storytelling skills are at the heart of it. But there is also the ability to coordinate a team of people to work together and an understanding of how to build websites from the ground up.”

To build the site, Wang utilized web-authoring tool and Localore-partner Zeega, a multimedia platform that allows non-technical creative producers to design and deploy web-based works without having to do any programming. Since the technology was still in the process of development during the documentary’s production, she worked with a team of graphic designers and web developers to customize the layout and create an intuitive user experience. This is critical on the Internet, where storytellers are constantly vying for the attention of their audiences, who can leave at any moment, with the click of a button. At the same time, the web rewards ingenuity, and for Wang, proved to be an inviting canvas with “no set bounds of time or space, only general conventions of attention span.” “The whole project was a huge machine of moving pieces,” she explains. “I think we all came at it with the idea that we wanted to make something experimental…to push the boundaries of how stories can be told on the Internet.”

Perhaps more significantly, this paradigm shift requires filmmakers to be open to the unpredictable ways audiences will interpret their work. Although Wang has final authority over what content is posted to the site, she believes the ethos of the project is to be encompassing and non-discriminatory: “We’ve invited the viewer to look around at their own life and, if what they’ve seen resonates, to contribute their own photos and stories. It makes the work potentially more powerful, but also out of the director’s control. I guess that’s the bottom line: there’s less total control over the project, both its reception and its final form, and those are either exciting or scary prospects, depending on your perspective.”

Even for the viewer who chooses not to contribute to the site directly, there are plenty of opportunities to discover personal meanings. In lieu of an overarching storyline, a number of mini-narratives are free to emerge. For instance, “A Disconnect Between Two People” describes the rift that grew between Mei and her father, Yifeng, who stayed behind in China to care for his ailing parents after the rest of the family moved to the U.S. Meanwhile, in “Football Is An Oxymoron” we learn how Peter, a second-generation Chinese-American, got involved in his children’s community and started a youth football team to get neighborhood kids traveling to other towns in order to see how other people live. While he continues to work with his own father, Sonny, at Peking House, a forty-year-old Roxbury establishment, he is happy that his own children have been able to move into other professions and start new lives of their own. Seen in sequence, these segments form a fascinating counterpoint and provide an enlightening commentary on both the cohesion and erosion of familial ties as well as the multi-generational saga of immigration.

In a project that leaves so much open for interpretation, one might wonder about the ultimate role of the director. Amidst all these clamoring voices, can there be any room for one, distinct vision to pervade? Yet, in addition to Wang’s voice-over narrations and descriptions, there is a clearly discernible, though subtle, directorial touch that gives Planet Takeout its charm. Wang, who has lived in Beijing, Brooklyn, and Baltimore, is a well-traveled, but still-curious, cosmopolitan and a deft facilitator of conversation. It is Chinese social custom to remain closed to, even suspicious of strangers. But Wang understands the importance of working through existing social networks, or as she has put it, “walking through the back door versus walking through the front.” To accomplish this, she called on mutual acquaintances within the Chinese community to help make inroads into the takeouts. Her sense of humor was also critical to get her subjects to open up during interviews. In the background of many clips, you can hear Wang’s laughter, which is infectious and seems to put her subjects at ease. In these moments, her authorship is evident not only in what she has written, but also in what she has brought others to say.

You can experience the documentary at www.PlanetTakeout.org and read Val Wang’s reports on the project at WGBH News http://wgbhnews.org/topic/planet-takeout.

You can experience the documentary at www.PlanetTakeout.org and read Val Wang’s reports on the project at WGBH News http://wgbhnews.org/topic/planet-takeout.