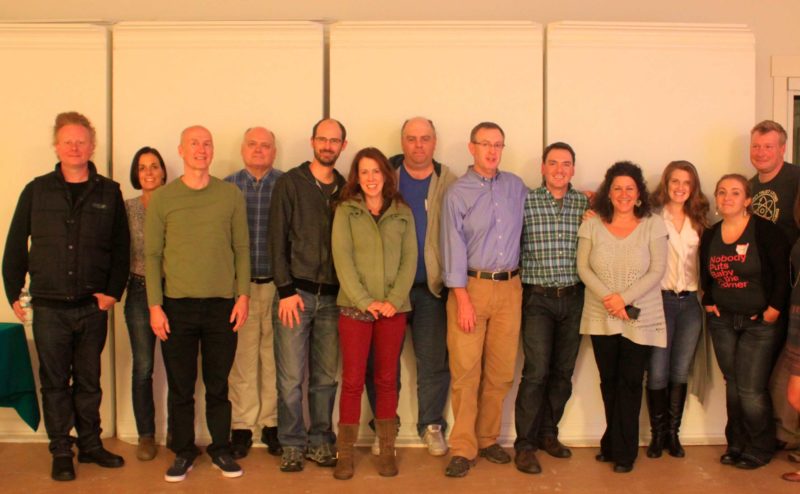 Share
A September workshop in Vermont trains New England filmmakers in the nuts and bolts of making films.

What does it take to make a film? That was the question answered by the first Stowe Story Labs in Stowe, Vermont. During an intense weekend from September 14 -16 of workshops, panel discussions, one-on-ones and screenings with Q & As, an accomplished group of independent film industry notables schooled 16 filmmakers in story development — and, crucially — how to make a story become a film with a chance of commercial success.

Filmmaker David Rocchio founded the Labs after several years of going to markets to learn how to turn commercially viable films into productions. He invited David Pope, a London filmmaker, educator, facilitator and mentor whom he met at Cannes, to lead the panel at Stowe Story labs. Mr. Pope was joined by Chris Millis, novelist and screenwriter, whose feature film Small Apartments premiered at the South By Southwest Film Festival (SXSW) and was released by Sony Pictures in 2013; renowned casting director Ellen Parks; and leading independent film producer Jay Van Hoy.

“We hope to make it an annual event,” Rocchio says. “It was an opportunity for people to get together and get insight for how to prepare for the industry.” Stowe Story Labs is a project of River Arts, a local community arts organization.

“Telling good stories is important,” Rocchio stresses. And, he adds, “If you want your work to be commercially viable, it’s very much a relationship business, and it’s both art and business.” He speaks of traditional networking, in which you reach out to people who can promote you, as well as peer-to-peer networking, involving people “who are in the same boat as you.”

“Being in Stowe is really cool. People in the industry really want to come here,” Rocchio says.

Rob Koier, a Labs participant and filmmaker based in Burlingont, Vermont, says that the pitching instruction was the most valuable takeaway. “David Pope broke down how to pitch films, which was great because people talk a lot about pitching but I never knew the mechanics of it,” Koier says. “We tried pitching our films to the group and to individual people.” In this way, Koier says, he was able to refine his pitch. “I finally felt like I had the perfect pitch.”

Koier’s pitch was for a film for which is he revising his script called Love/Hate. He describes it as a dark a comedy about Michael and Maya who are romantically-involved con artists. “The other thing that they talked about was the theme of the film,“ he goes on to say, “and so I had to pitch the idea that love and hate are opposite sides of a coin and they are closer than we think. The film asks, do we secretly love the ones that we hate?”

Koier also spoke of the reward of getting to spend time networking with peers. “The workshop is a good place to go to learn about story structure, but it’s also great just to hang out with other people who are pursuing the same goals. There’s a lot of camaraderie and support. It’s a pretty demanding and challenging thing to pursue, and it’s inspiring to hang out with others who are doing the same thing.”

Another “Labber,” filmmaker John DiGeorge of Brattleboro, Vermont, says, “The workshop was really valuable to me on all fronts. They demystified a lot of the process of getting independent films made. We worked a lot on presenting and pitching our work. It was really participatory workshop, not just sitting around and being lectured to.”

DiGeorge speaks about the way the Labs taught how to sell a screenplay, along with how to get the support and resources one needs to turn a screenplay into a film. He points out that the presenters represented the kinds of people a filmmaker would have to interact with, hire, or otherwise collaborate with. “They were very approachable,” he says of the panelists. “And very open about how films that they had enabled or worked on came into being. That was really valuable. The process can be confusing and intimidating.” DiGeorge says, “It was a great workshop. I’m telling friends about it, highly recommending it, and I would go back again.

Rocchio sums up his approach to the Labs: “You’ve got to figure it out for yourself. The number one thing is talent, the capacity to tell a good story. And, you’ve got to be a collaborator if you want your work to be commercially viable.”

For information about Stowe Story Labs in 2014, e-mail info@riverartsvt.org or david@stowestorylabs.org.