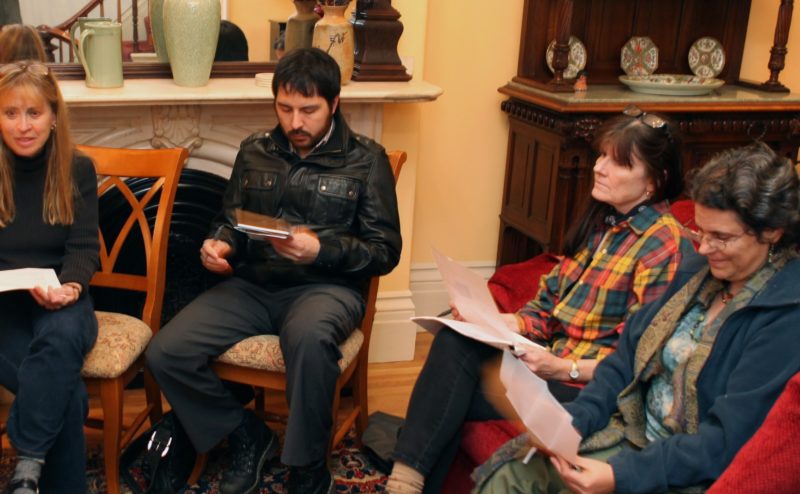 Share
Screenplay Doctor, Susan Kouguell, interviews Genine Tillotson, Director of Harvard Square Script Writers, about HSSW and the benefits of joining a writing group. Email screenwriter@newenglandfilm.com to have your screenwriting question answered in an upcoming issue.

Joining a screenwriters’ group is a terrific way to have your work read by others, to receive feedback on your writing, as well as to share resources, brainstorm ideas and insights about the film business.

How do you find a group in your area? Contact your state’s film commission for suggestions, as well as organizations like the Independent Film Project (www.ifp.org) which has chapters throughout the country, Women in Film and Video New England (www.womeninfilmvideo.org), and check listings in screenwriting and film publications.

One writers’ group in the Boston area is Harvard Square Scriptwriters. Last month I was invited as a guest speaker by Genine Tillotson, the Director of HSSW, to discuss screenwriting and the business of screenwriting. For this month’s column, I spoke with Genine Tillotson about HSSW.

Susan Kouguell: Harvard Square Script Writers is one of the oldest script writers groups in New England. Tell me about HSSW and why it is a vital organization to the New England community.

Genine Tillotson: HSSW offers an incredible opportunity for aspiring screenwriters of all ages to hone their craft with like-minded peers, during weekly working sessions.

I think all writers lead a very isolated existence and, from my experience, I have seen how they can often lose objectivity as they labor alone, surrounded by the personalities and situations they are creating. It’s quite common, for example, for an author to become too attached to scenes or characters that do nothing to forward the story and that can actually make it unmarketable. Or perhaps what seems brilliantly clear to the author, turns out to be highly confusing to any other reader. Recognizing that they are just too close to the story, scriptwriters will ask for help determining how to improve their work. Enter HSSW — we provide a subjective eye and we offer concrete solutions.

Even with the globalization of communication, scriptwriters in New England still have one major strike against them — they are far from the entertainment hubs of LA or NYC. But the majority of our members are serious and want to enter their work in contests, send it to production companies, and link up with agents, directors or interested actors. HSSW helps support and encourage the penning of initial drafts and the difficult task of rewriting until each script is truly ready to make a great impression in this highly competitive field. Many of our members have seen scripts optioned, have made Indie films, have written and directed documentaries, created stage plays, worked for television, and gone into other related aspects of the industry. A scriptwriting group that meets as regularly as we do [every Monday] also encourages discipline by imposing deadlines.
But, honestly, I no longer think of us as focused on New England per se, what with the advent of tools such as Skype and GoToMeeting. At this point, we could be holding script reviews with writers in Beijing or Stockholm, and some of our members are far away at this juncture but I hope they’ll continue to participate, both submitting scripts and joining us for reviews.

SK: HSSW offer scriptwriters an opportunity to have their work read and discussed by fellow members. How does this process work?

GT: Scripts are sent out via email to, believe it or not, about 170 people every week. But only around 10-20 will seriously read the document and attend the weekly meeting to discuss it with the author. HSSW meets every Monday night from 7:00 – 9:00 p.m. during the academic year, right now at 72 Columbus Street, Newton. Meetings are highly structured, with a step-by-step format that examines everything from the writer’s original rationale for penning the piece, to defining its genre and target audience, to refining the script’s log line — a pitch in one phrase. The meeting culminates in the most important part where we examine the story and help the author to see both its strengths and areas for improvement. The group is highly creative and, typically, will not merely critique, but will also offer narrative alternatives, suggestions for significant changes to improve story structure and arc.

SK: What is your background in screenwriting and film?

GT: I began working in educational video back in the early 80s and was an intern at Action for Children’s Television when that group was having a significant impact on the quality of broadcast children’s TV programming. I have worked at ABC Early Morning and Children’s Programming, developing series; wrote story outlines for Harvey Weinstein’s first venture into movie-making, Weinstein Skyfield Productions; have created dramatic interactive medical simulations with groups as diverse as George Washington U’s Teaching Hospital and MA General Hospital. I was a producer at VIZWIZ (now National Video) producing courses for MIT; wrote, produced, and directed a wide variety of award-winning edutainment videos and interactive experiences for science museums and other clients; script doctored several PBS programs and an IMAX film on coral reefs; did a dramatic-mixed-with-documentary series on adolescent risk-taking for high school classroom use; produced and directed a video-based interactive Parenting Guide for Fisher-Price, have produced commercials for television, and have written and directed a variety of web-based films and commercials in recent years. Scriptwriting, for my own creative pleasure, was something I came to late in life (my focus had been more in the documentary arena). And that is how I became involved with, and later took over HSSW.

SK: When did you become head of HSSW and what drew you to taking this position?

GT: I acquired Harvard Square Script Writers from its former owner, Scott Anderson in October of 2012. I wanted the organization to continue, and to evolve, and that seemed like the way to make it happen. I wanted the group to offer more professional workshops with successful writers/filmmakers and I wanted us to begin more aggressive outreach with the commercial entertainment world. I also wanted members to think about the group differently, recognizing that they could submit a script/TV pilot/stage play at various points — from treatment, to outline, to first act, etc., evolving and refining with the group’s input. Now, I’m trying to re-organize HSSW as a nonprofit, with help from other very committed members. That will hopefully make us eligible for grants and the resources not open to us now.

SK: There are members not only from the Boston area, but from New Hampshire and Rhode Island. Anywhere else?

GT: I’d like to see us use technology to reach writers who are serious but isolated, anywhere really. One of our members just moved to Washington state and she wrote asking how she can stay involved. I told her that we will see her outline through to a screenplay. Just because someone is geographically removed is no reason they should not participate. We also have members in San Francisco, LA, and New York, to name a few places.

GT: We are quite diverse in age, race, ethnic group, and professional backgrounds. There are septuagenarians and first-year grad students. There are lawyers, horror-film directors, computer scientists, architects, doctors, teachers, marketing people, novelists, set designers, engineers –you name it. We have probably 40-50 really active participants who come fairly regularly to script reviews, rotating depending on their interest in the genre/author/storyline and their availability. We have “life-time” authors who have submitted scripts at various intervals.

SK: There is a cross section of experience in this group. Some members are relatively new to screenwriting while others have more experience. Why should screenwriters join?

GT: HSSW people believe they have great stories to tell, whether derived from personal experience, or spun out of the deepest depths of their imagination, and they want to tell them.

GT: Our new partnership with the Tufts Department of Drama and Dance will hopefully result in both readings and workshop/lectures.

Our first event, a screening and discussion with two-time Nicholl semi and quarter finalist Joel Strunk will be on November 11th at 7:00 at Tuft’s Alumnae Center, Alumnae Hall. 40 Talbot Avenue Medford, MA 02155. We will screen Mr. Strunk’s film, Anatomy of the Tide http://www.youtube.com/watch?v=IedNtZieoik and discuss his quest to win the Nicholl. Tufts students enter free. Admission for HSSW members $15.00; others $20.00.

SK: What are some success stories from HSSW members?

GT: Member Clark Carroll’s new script won the semi’s at the Austin Film Festival; Wyndham Lewis placed at the Nicholl, wrote for Nurse Jackie and just sold a series to Warner Bros.; Bob Tremblay just had one of his scripts optioned and is rewriting now; Robert Hamel turned one of his scripts into a musical which he produced in Boston last year; Rasmussen Bros. have produced three indie films, one directed by John Carpenter.

If you are interested in joining Harvard Square Script Writers, due are $15.00 per meeting, including snacks. Cash or check is accepted at meeting. Any individual who wants his/her screenplay evaluated pays a one-time lifetime Author membership fee of $300.00. This entitles that member to unlimited reviews of his/her work, scheduling permitted. Scripts are scheduled on a first come, first served basis.

To sign up for the mailing list, write to genine@hsswriters.com or admin@hsswriters.com for scripts, newsletters, and and learn more. Or call 978-505-5652. For more information about Harvard Square Script Writers, visit: http://www.hsswriters.com

Award-winning screenwriter and filmmaker Susan Kouguell teaches screenwriting and film at Tufts University, and is chairperson of Su-City Pictures East, LLC, a motion picture consulting company founded in 1990 where she works with over 1,000 writers, filmmakers, and industry executives worldwide. (www.su-city-pictures.com http://su-city-pictures.com/wpblog/).

Susan wrote THE SAVVY SCREENWRITER: How to Sell Your Screenplay (and Yourself) Without Selling Out! (St. Martin’s Griffin) and SAVVY CHARACTERS SELL SCREENPLAYS! A comprehensive guide to crafting winning characters with film analyses and screenwriting exercises, which is available at $1.00 off by clicking on www.createspace.com/3558862 and using DISCOUNT CODE: G22GAZPD. On Kindle: http://www.amazon.com/dp/B009SB8Z7M (discount code does not apply).

Award-winning screenwriter and filmmaker Susan Kouguell teaches screenwriting and film at Tufts University, and is chairperson of Su-City Pictures East, LLC, a motion picture consulting company founded in 1990 where she works with over 1,000 writers, filmmakers, and industry executives worldwide. (www.su-city-pictures.com http://su-city-pictures.com/wpblog/). Susan wrote THE SAVVY SCREENWRITER: How to Sell Your Screenplay (and Yourself) Without Selling Out! (St. Martin’s Griffin) and SAVVY CHARACTERS SELL SCREENPLAYS! A comprehensive guide to crafting winning characters with film analyses and screenwriting exercises, which is available at $1.00 off by clicking on www.createspace.com/3558862 and using DISCOUNT CODE: G22GAZPD. On Kindle: http://www.amazon.com/dp/B009SB8Z7M (discount code does not apply). Follow Susan at Su-City Pictures, LLC Facebook fan page and SKouguell on Twitter.