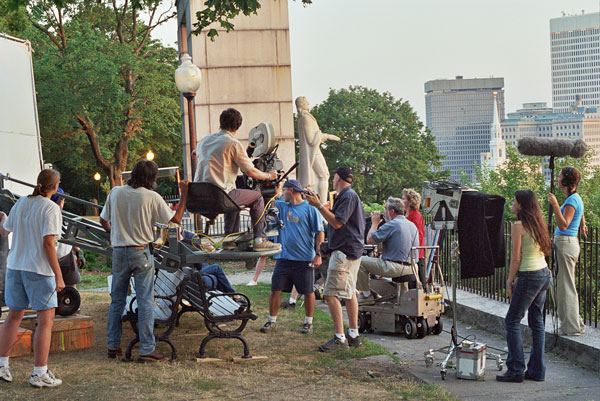 Share
A low-residency film program is reimagining film production for independent filmmakers and screenwriters who are looking to bring their visions to life.

The Vermont College of Fine Arts is celebrating its fifth birthday by launching a new, innovative film school, a low-residency program designed for independent filmmakers and screenwriters looking to explore and refine their craft while developing a body of work and building professional relationships. The program will feature an individualized curriculum that brings students and faculty together twice a year for week-long, intensive residencies at the campus in Montpelier, Vermont. These workshops will feature a variety of presentations, screenings and collaborative exercises and tutorials. Then, in the ensuing six months between the residencies, students are paired with an instructor who they correspond with as they work on a project from their homes.

The program will be chaired by Laura Colella, whose newest film Breakfast With Curtis we reviewed last October. Colella has taught 16mm film production and directing at RISD for sixteen years and currently teaches screenwriting at Brown University. Along with teaching her courses, she has fostered a bright career as an acclaimed independent filmmaker and was one of Filmmaker Magazine’s 25 New Faces of Independent Film. Her films have screened at over 100 festivals internationally and have reeled in over twenty-five awards and various fellowships and grants. As founding faculty chair, Colella is responsible for organizing the program’s biannual retreats and for recruiting an impressive team of instructors.

“I think what’s especially distinctive about the faculty in this program is that they are active working filmmakers, animators and screenwriters, versed in many aspects of production,” Colella remarked. “The curriculum is project-based, and faculty will provide individual mentorship and guidance as students create work. Artistic development is a priority.”

All of the teachers are accomplished filmmakers and auteurs with a distinctive, modern voice. For instance, documentary filmmaker Nina Davenport’s first-person documentary features have drawn acclaim for the way they freely meander through the episodes of her own life while simultaneously bringing them under the scrutiny of self-reflection. Director Terence Nance is an IFP Narrative lab alumnus whose vibrant, pulsating visions of romance and urban life are on display in An Oversimplification of Her Beauty. Adding further to the multifaceted faculty, T. Marie Dudman, who is known internationally for her Time Based Pixel Paintings, creates work that falls somewhere between fine art, animation and installation.

“I sought faculty whose work was really exciting, and reflected strong creative vision, craftsmanship, and a holistic, hands-on approach to filmmaking,” Colella says of her choices.

Low-residency degrees like this have been gaining momentum in recent years because they offer an attractive alternative to more costly and demanding campus programs. Many students who want to develop their work without sacrificing their professional careers or other commitments have embraced these more accommodating courses of study. Furthermore, students and teachers pursuing careers in creative fields feel this paradigm more accurately mimics (and prepares students for) what it is like to be an artist juggling personal pursuits with the realities of making a living.

Often, students in low-residency programs are older, more career-oriented and are spending their own savings on their education. They expect more tangible and redeemable end-results from the curriculum and are commonly characterized as more practically oriented. Advocates of low-residency programs claim that many students studying within more traditional programs can easily become rarefied within the protective embryo of the university green.

Eschewing the typical slew of syllabi, courses, grades, and books, these low-cost programs can focus on the central asset of any strong graduate MFA program: the one-on-one student-mentor relationship. “It’s a relatively simple concept and that’s part of the beauty of it. It’s very streamlined; centered around an individual curriculum between faculty mentor and student,” Colella explains. “Anything you’d expect like screenings and readings would be designed in relation to a project. In my experience, what students really want the most is individual attention towards their projects.”

Ostensibly, an online correspondence offers some distinct advantages to traditional classroom critiques. Exchanging thoughts in writing enables students to reflect on the criticism they receive from their mentors and take the time to craft thoughtful responses. Then, the in-person workshops can build on this foundation, providing an interpersonal context in which to screen and receive work, pose criticisms and experiment with new technologies and techniques.

Furthermore, students are encouraged to collaborate, lend a helping hand, and serve on the crew for other student shoots. With an annual tuition of $20,500, the program allows students to allocate more money to their projects. Colella believes that financial resources that would typically be allocated to a higher tuition or more books can now support a mutual exchange of services — “I’ll go out and help you for a weekend and you help me for a weekend.” But will the community established during the residencies be strong enough to persist once the students have dispersed to their respective homes?

“Any time I’ve had residency experiences in the past, those relationships tend to be very deep. There’s something about spending around-the-clock time with creative people who have similar goals and interests that tends to create lasting relationships,” Colella insists. She hopes that geographic distances won’t hinder this kind of utopian community exchange. “Maybe students will travel to new places to work on one another’s projects. It could be part of the learning process. That part is really exciting to me.”

For magnetic personalities or students living in creative hotbeds like Brooklyn, Austin, TX or San Francisco, it may be easy to attract a crew of eager collaborators. But what about, for example, the student working full-time as a video editor in, say, a less desirable destination? Will they be able to easily recruit help from their peers? Or will they be successful in making work on their own? These kinds of questions often riddle the conversation about low-residency film programs, whose critics claim that film production is both a resource-intensive and inherently collaborative medium and therefore is not well-suited for remote study. The low-residency model rests on the belief that collaboration and support will circulate evenly amongst students, but this expectation is not outlined explicitly in the program. For a program like this to be successful students must create a community without the material foundation provided by a campus.

According to Colella, opportunities for cross-pollination abound within the school as well. Vermont College of Fine Arts offers MFA programs in visual art, writing, graphic design and music composition. “The music department is eager to collaborate with incoming film students,” Colella contends. “There’s a visual arts department with people who could potentially work on production design. There’s a graphic design department that could work on titles and other graphic aspects.”

Although the school is gathering equipment for student use, it’s easy to imagine difficulties distributing those resources across the country as students leave campus after the residencies. For students who might not have their own equipment or have access to a network of other film professionals, this model could prove challenging, requiring them to be creative in how they piece their projects together without the arsenal of equipment that drives film production in the commercial industry or in a traditional university setting. Perhaps students will have to make due with what they can muster together, devising creative short cuts to circumvent their technical limitations.

This lean, resourceful approach to filmmaking is a modality that Colella has had great success with. She shot her latest film in her own home on a shoestring budget, enlisting her neighbors for the cast. At the 2013 Independent Spirit Awards, the film was nominated for a Cassavetes Award for Best Feature made for under $500,000, and won a $50,000 grant to support its distribution (though this amount was substantially greater than the film’s overall budget).

Yet this low-budget shooting style, reincarnated as an educational model, isn’t for the faint of heart. Colella admits that only certain students will be a good fit for the program: “Students that are equipped to be good independent filmmakers are going to be the best-suited for the program because it does take so much discipline and drive and determination and creativity to create work — especially work that stands out and that can attract supporters, ranging from the collaborators you recruit to your audiences. It’s going to be self-selecting in a way. It’s not for people who aren’t passionate about making work.”

That level of passion is necessary to thrive in a low-residency program, but it is also critical for producing remarkable works of film art in an age where compelling content can stand for itself, circulate on the Internet, go viral and find an audience. Perhaps these kinds of programs can help us to re-imagine a kind of modern day auteur filmmaker working outside the commercial film industry, who not only writes and directs, but also shoots, gathers footage, edits, animates and does whatever it takes to execute their personal vision. Colella believes that strong personal vision trumps all obstacles and is the bedrock from which creative communities can grow. “Some people may question this model because filmmaking is collaborative, but really the most interesting work comes from an individual vision, and this program is really targeted towards developing that specifically. It encourages students to mine their resources and to create work in the communities that they feel most connected to, where they have people they work with already, and locations that inspire them — not rooted to an arbitrary campus location. It’s kind of the best of both worlds.”

The low-residency MFA in Film Production at the Vermont College of Fine Arts is currently accepting applications. The program will launch in October of this year. For more information on the program, click here.

The low-residency MFA in Film Production at the Vermont College of Fine Arts is currently accepting applications. The program will launch in October of this year. For more information on the program, click here.