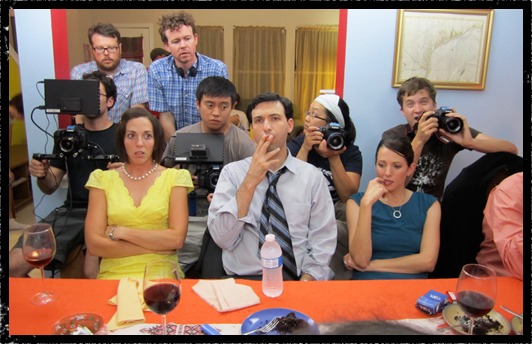 Wearing the Many Hats of Filmmaking: A Conversation with Alex Karpovsky

Share
Massachusetts native Alex Karpovsky discusses what it’s like to fill multiple roles, both on screen and off, in the production of his two new films, Rubberneck and Red Flag.

Perhaps most widely known for his current role on HBO’s Girls, Alex Karpovsky started his career in standup and theatre, which set him on the path to independent filmmaking. His first feature film, The Hole Story, garnered him a nod from FILMMAKER MAGZINE as one of its ‘25 New Faces of Independent Film’ in 2006. Since then, Karpovsky has acted in films such as Beeswax, Tiny Furniture, and Gayby. He has also continued his own writing and directing with the feature films Woodpecker and Trust Us, This Is All Made Up.

Now promoting two new films, in which he has not only written and directed, but also acted and in one case co-edited, Karpovsky is juggling the hats of what it means to be a modern filmmaker. His feature Red Flag is a comedy in which Alex Karpovsky plays Alex Karpovsky, a “newly single indie filmmaker who hits the road with an old friend to promote one of his films.” The other film, Rubberneck, in which Karpovsky plays a research scientist, is “a chillingly believable story of workplace romance gone wrong.” He has graciously taken time from promoting these films to give us some insight on what it is like to be a modern filmmaker in an ever-changing industry, and on where he feels the entertainment industry in Massachusetts is headed.

K. Correia: Recently, there has been an increased focus on having movies based/filmed in Massachusetts. Your own film Rubberneck takes place in Boston and was filmed just north of Boston. How do you feel about this increase?

Alex Karpovsky: Most of the movies being filmed in Boston are big-budget productions, and I’m happy they’re injecting some cash into Boston’s economy and that the local politicians are still nurturing the notion of tax incentives. I hope the trust deepens and more local studios/stages are built and the general infrastructure supporting film production in Massachusetts expands.

I’ve made some great relationships in the Boston film community, working with folks like Garth Donovan who co-wrote Rubberneck with me and who produced it, along with Michael Bowes, and I’d love to be able to come back and make another film in the area with wider resources. I think there a lot of stories to be told in Boston that have nothing to do with crime or the mob, and I hope to one day explore such less-familiar local terrain.

KC: In both Red Flag and Rubberneck, you act and direct. What are the difficulties with directing and acting at the same time?

Karpovsky: The biggest difficulty is trying to be fully present and engaged in a scene as an actor while simultaneously taking notes in the back of your mind on what adjustments we need to make to improve the scene and/or give us options in the editing room.

KC: As the writer of both Red Flag and Rubberneck, how much of your true self is reflected in the story line and the characters you portray?

Karpovsky: Well, I co-wrote Rubberneck with Garth Donovan, and we never intended for me to act in the film. We had a long and laborious casting process and ultimately found someone very talented who gives off a very different energy than me.

Unfortunately, he had a family emergency that forced him to leave the film early into production. I stepped in and tried to fill his shoes. So, it was never a premeditated notion to try something different as an actor — it was strictly a response to immediate circumstance.

The protagonist of Rubberneck and the storyline that Garth and I created was largely fictional, though it was initially inspired by real events. I can’t say that there was too much of our personal past that found its way into the film. Things are very different with Red Flag, where the main character is called Alex Karpovsky. I tried to amplify my own fears and insecurities and neuroses and delusional ambitions for comedic — and sometimes dramatic — effect. In short, I feel like I played a caricatured version of myself.

KC: You have taken on many roles in your career: actor, writer, director, producer. What choices have lead you down each of these paths and which of these do you believe is your true calling?

Karpovsky: Actor — I acted in my first film and then Andrew Bujalski cast me in his film Beeswax, which opened a few small doors in the indie film bubble.

Writer/director — I was doing comedic theater and stand-up in my early twenties and there came a point where all of it just felt so ephemeral and disposable. I had an itch, perhaps rooted in some overly dramatic negotiation with mortality, to try something with more permanence, and that was the initial reason I drifted towards experimenting with video editing and then writing and directing video ideas.

Producer — my films are extremely micro-budget endeavors, and everyone involved has to wear many hats. As such, I’ve acted as some form of a producer on most of my films. This is less of a desire and more of a necessity to get things done. This being said, I’ve collaborated with local producer Mike Bowes on my last two films and its made life much, much easier and allowed filmmaking to be much more fun and focused.

True calling? I may be an atheist in this sense.

KC: How did your role in the HBO show Girls come about?

Karpovsky: I acted in Tiny Furniture, a feature-length film Lena Dunham made a little while back. When the HBO train started to get rolling, she asked to me join.

KC: Can you tell us about any future projects you are currently developing?

Karpovsky: I’m writing a comedy and a drama. We’re going back into production for season 3 of Girls in early April. Once we wrap in September, I hope to begin pre-production on one of these projects. I also acted in a film called Good Night, which is premiering at SXSW this year and I play the character of Marty Green in the upcoming Coen Brothers film Inside Llewyn Davis.

For more information on where you can see Rubberneck or Red Flag, and to learn more about Alex Karpovsky’s work, check out his website.

For more information on where you can see Rubberneck or Red Flag, and to learn more about Alex Karpovsky's work, check out his website.