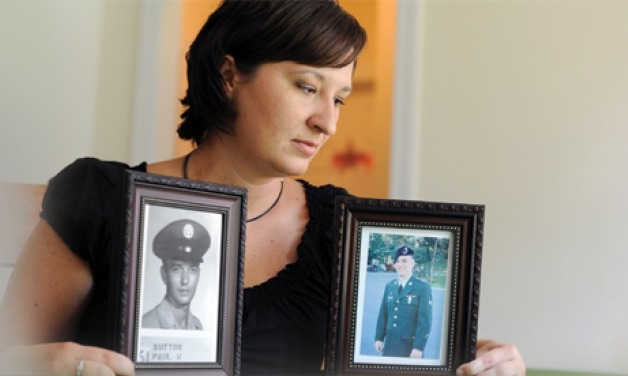 “The War Within” – Profiles of Warriors After Combat

Share
New England Photographer Amy Elliott tells the story of life after wartime in a series of photographs and videos commissioned by the American legion.

The trials of military service do not end once soldiers return from combat. Formerly coined “battle fatigue” or “shell shock,” Post-Traumatic Stress Disorder was officially recognized as a clinical condition in 1980. The number of diagnosed cases has been growing ever since. Today, PTSD plagues one in six combat veterans. Most of them suffer in silence for fear that openly acknowledging their symptoms will estrange them from their fellow troops, jeopardize their military careers, or place undue burden on their families. In the absence of proper treatment, they are left to navigate any number of symptoms — hopelessness, depression, substance abuse, chronic pain and relationship problems — on their own.

New York-based photographer Amy C. Elliott has documented this quiet epidemic with a portfolio of photos and videos commissioned by the American Legion Magazine for a series of articles entitled “The War Within.” Focused on raising awareness on PTSD across the military community and the greater public, the articles tell the story of veterans and families who have embarked on the long path to healing. The works are moving portraits of veterans in transition, as they attempt to reintegrate into society, get jobs, and repair personal relationships strained by months overseas and the trauma of combat. I was fortunate enough to have Elliott answer a few questions about her experience documenting these families and individuals and explain the choices she made in translating their stories into images.

Dave Walker: You work as both a filmmaker and photographer. How do these two disciplines inform one another and how does that interplay manifest in your work?

Amy C. Elliott: Each medium influences my artistic approach to the other. On still assignments I find myself looking to capture sequences, rather than one definitive moment. And in my motion work I’m as rigorous about composition, lighting, etc. as I am about content. I think that comes across in the aesthetics of my images, in both disciplines.

In “The War Within,” for example, the photos and video overlapped in content but functioned differently. The stills were illustrative — they supported a series of articles in the national magazine. The video was meant to be completely self-contained.

DW: Do you plan on doing more hybrid projects in the future?

Elliott: The market is starting to demand it. Even some of my magazine clients who are still very much committed to print are looking for motion content as well. By incorporating video and other resources on their websites, they invite readers who are interested in a magazine story to investigate it more thoroughly, or in a different way. I’m excited by the trend and the opportunities it could bring.

DW: Can you talk a little bit about your heritage as a photographer? I understand you studied visual arts at Princeton. What are your influences? What elements from your education do you keep with you and implement in your work as a professional?

Elliott: I went to college way back in the ‘90s, and learned on film (black and white film, to be specific). I was schooled in traditional techniques — lots of all-nighters in the darkroom. The university also prioritized the study of original works, and gave students access to the exceptional photography collection at the Princeton Museum of Art. Even now that most of my work is delivered digitally, an appreciation for the fundamentals of how images are made continues to inform my process.

DW: Can you describe your relationship with The American Legion? How does this project rank for you?

Elliott: I’ve been lucky to have The American Legion as a regular client — there have been so many incredible and important stories I’ve gotten to facilitate telling. The various assignments are hard to rank, but “The War Within” is near the top, for sure. Not only because of the subject matter but also the scope — it was the largest editorial multi-media project the Legion had ever commissioned. I traveled to 12 states and shot with 20 subjects. I was able to go more in-depth than on the average assignment, and it made the piece richer.

DW: Do you have to prepare for this emotionally intense subject matter? Does it get exhausting to immerse yourself in it or do you have ways to decompress?

Elliott: I prepare for and decompress from emotionally demanding shoots in very much the same way — by concentrating on the technical parts of my job. I always get keyed up before such a shoot and also find it hard to come down. Prepping and packing my gear or logging and capturing footage are ways I can ease in and out of the experience.

DW: Each of the three segments of the video series, “The War Within” — Families Afflicted, Military Sexual Trauma, and Paths to Healing — try to bring to light elements of post-traumatic stress. They bring attention to the repercussions of military service the American public may not be familiar with. Which story was the most difficult to tell?

Elliott: The one that might surprise people the most would be Families Afflicted — I’m not sure the general public realizes the collateral damage that these injuries (PTSD and TBI) can inflict. And that segment features the toughest shoot for me personally — with the parents of former Marine Clay Hunt, an OEF/OIF veteran who committed suicide after a struggle with PTSD. The segment begins and ends with Clay’s mom, and her pain was as heartbreaking as her courage in speaking out was inspiring.

DW: Are there any other profiles that really stand out to you? Any unexpected moments you didn’t anticipate or characters that particularly inspired you?

Elliott: One of note would have to be Mary Gallagher, an OIF vet from Massachusetts who was profiled in the segment on Military Sexual Trauma. I felt a kinship with her immediately — we’re the same age, she’s a big baseball fan (though unfortunately of the Red Sox, so I made sure to wear my Evil Empire shirt for our second shoot) and she had a career she loved. She was forced to give up that career — ten years in the Air Force — due to the trauma she experienced. I was struck by her bravery, not only in sharing her story but also facing an uncertain future. Shortly after filming she published a blog piece on the Huffington Post.

DW: The photos accompany a series of articles on PTSD also published by The American Legion magazine. Did the stories/content in the articles directly inform the kind of images you tried to capture? Or did you shoot and edit the documentary in a way that differed from the characters and stories presented in the articles?

Elliott: The photographs were portraits, for the most part, as assigned by the Legion. The two writers involved steered me towards the people they were planning to highlight and I shot accordingly. That was my main job as the photographer — get the art needed for the article.

I had a lot more autonomy on the video — I was in charge of shooting, directing, and editing. While many of the same people were featured, I sought to film them in more active situations. I conducted some formal, sit down interviews, but I also documented daily activities, special occasions, etc. If a situation didn’t lend itself to more observational shooting, the subject got cut down (or entirely) from the final video.

DW: How familiar were you with these psychological conditions going into the shoots? Did you conduct research or try to get to know the subjects? At what point do you feel it is time to take out the camera and start capturing images?

Elliott: I had a general knowledge of PTSD and TBI but deepened it before production began. I did a lot of research — read material authored by experts in the field, spoke to a social worker and, perhaps most importantly, tried to familiarize myself with the pertinent work of anyone featured in the project. For example, Dr. Paul Harch was profiled in “Paths To Healing” for his success treating TBI with hyperbaric oxygen. I read one of his medical journal articles before shooting with him in Louisiana and his book before shooting in New York with one of his patients.

I think that kind of preparation is a necessary part of any assignment and is critical to building rapport. When a subject realizes you have made the investment to become conversant in the relevant topic, they become more comfortable and are more willing to open up. Being fluent on the issues goes a long way towards establishing the trust that makes for a successful shoot.

DW: Did you feel that working light (without a large crew or excessive equipment) worked to your advantage on this project?

Elliott: Absolutely, and I’d go further than that — in some cases I think I literally would not have gotten the footage otherwise. There was one instance where I started filming with someone and we had to stop because he felt uncomfortable. We took a break, went for a long walk, and finally caught a cab to another location altogether. Only then was he able to continue. That just wouldn’t have happened if I had been weighed down with extra people and/or gear.

DW: Can you describe the post-production process? How did you handle and edit the footage?

Elliott: In the approximately three months of production, I was shooting or traveling for the project about half the time. I turned the stills around on the road and logged and transcribed the video footage while home in between shoots.

I begin editing in earnest when all shooting was done. I cut on Final Cut Pro and output finished Quicktime files for the client for review. The final three-part documentary ran 28 minutes long. I shot about 50 hours so the ratio wasn’t horrible, but there were still huge swaths of footage (and two complete locations) that were cut altogether.

DW: Since “The War Within” was published, you’ve completed another multimedia project for the Legion, on housing for homeless veterans, entitled “All They Need Is a Chance.” Can you tell me a little more about this project? Does it continue on some of the same themes from “The War Within?”

Elliott: “All They Need Is A Chance” is a bit different in that I consider it slightly more of an advocacy piece — it profiles Legion programs that tackle homelessness within the veteran population and thereby shows people what they can do to help as well. “The War Within” is more of an investigation into the issues surrounding PTSD and TBI. But they are similar in the sense that these are two challenges facing our veterans that all Americans should be concerned with.

The articles can be read with accompanying photos at The American Legion Website.

The articles can be read with accompanying photos at The American Legion Website.