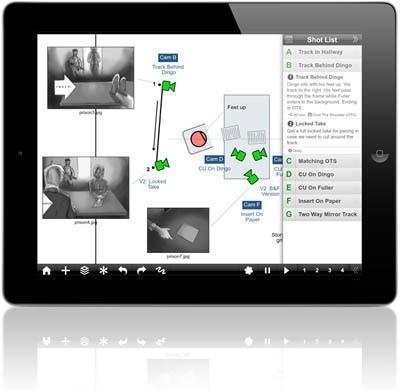 Shot Designer: Shot Planning and Design On Your Phone, Tablet, or Computer

Hollywood Camera Work’s instructional DVDs, The Master Course in High-End Blocking & Staging, Visual Effects for Directors, and Hot Moves: The Science of Awesome, provide perhaps the most in-depth guides ever to understanding camera movement, scene staging and visual effects preparation. DVD creator Per Holmes extended these DVDs with a series of multi-day live workshops around the world to teach directors how to put his theories into practice.

A key component to the staging and blocking processes was learning to pre-block the actors, action and camera movements on paper, and on computer using simple icons in Microsoft Powerpoint. The system worked, although it was tedious.

Holmes has now released a software application that is the easiest yet most complete design tool for quickly and effortlessly block out scene diagrams, camera angles and movement, lighting plots, storyboards, shot lists and lens choices.

Running on PCs, Macs, iPads, iPhones and Android phones, Shot Designer allows directors to design shots and scenes as simply or complex as desired, create rooms, place furniture, actors and virtual camera icons into the scene, and even animate everything for complex camera moves.

On an iPad or smart phone, the program is controlled by placing and moving elements around with the touch screen. On computers, use the mouse or trackpad.

Shot designer comes with pre-installed templates, or directors and DPs can create their own. Still images can be imported and used as backgrounds for the camera diagrams.

In addition to importing existing images, the “director’s viewfinder” option allows directors to take a photo with their phone or iPad at the actual location and attach that image to one of the virtual cameras in the program. It will give the director and crew a reference to the location, set and shot angle.

More than just a link to the phone’s camera, the director’s viewfinder has functions to adjust the phone to mimic the type of camera that will be used in the actual production, such as Arri Alexa or Red Epic, and once set, pinch-zooming the image will change the lens focal length setting. This allows the director to see what the shot would look like with various lenses, such as 50mm, 18mm, 70mm, etc.

Once scenes are blocked, they can be synced with a user’s other devices. Currently this utilizes the dropbox service, but direct syncing is listed as a near-term update. Support for Windows Surface tablet is also in development, as well as 3D, script import and synthesized script speech.

Scenes and shots can also be exported and emailed as jpg, PDF or Excel files.

If its feature set grows into a networked application allowing interaction among key production personnel, I predict Shot Designer will likely become a staple of all movie and TV productions in the very near future. Its features and design are well-thought and elegantly simple.

Already in use by thousands of movie and TV directors and DPs, at most of the major networks and studios, Shot Designer is available in a free lite version as well as the Pro version for only $19.99. Download the mobile or tablet version first at the Apple App Store, Amazon.com or Google Play. After downloading the mobile version, users can get a license key to activate their desktop versions at no extra charge.