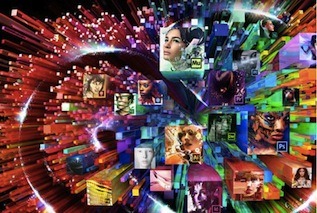 Hey You, Get Onto My Cloud

Share
Don't want to shell out $2,599 for Adobe's software? Now you can rent it with the Creative Cloud, a new subscription model.

With the release of Creative Suite 6, Adobe has also introduced a new subscription pricing model as an alternative to buying the entire suite or individual applications.

Dubbed the Creative Cloud, the subscription-based offering is “a hub for making, sharing and delivering creative work,” according to Adobe Systems Inc. Instead of buying the software (and Adobe apps are not cheap), users can opt to pay a monthly subscription for use of all the CS6 applications on any of their computers.

The included programs are the latest releases of Photoshop, InDesign, Illustrator, Dreamweaver, Adobe Premiere Pro, After Effects, Flash Professional and other products. In addition, two new Touch apps, Proto and Adobe Collage, are now available for iOS devices such as the iPad.

Adobe also offers a new website-creation application, Muse, only via the cloud subscription model. Adobe noted that more than 700,000 users downloaded Muse during its free beta testing period. Muse is a new tool that enables designers to create HTML5-based websites without writing code.

Benefits of the Cloud?

First, as Adobe rolls out upgrades to its products, subscribers will automatically get them, as well as interim updates as soon as they’re released.

Second, many users may see a cost savings to the subscription model. Priced at $50 per month for unlimited access to all of the Master Collection suite of programs ($30/mo. for students, teachers and current CS owners), users who would normally purchase the latest versions of the Master Collection or one of the other suites as they’re released will save money.

For example, the Production Premium package retails for $1,899, while the Master Collection (that comprises the Creative Cloud offering) sells for a whopping $2,599. So at $50/month, or $600/year, it would take more than four years to spend as much as buying the Master Collection. Since Adobe releases new versions every 18-24 months, purchasing would cost much more than subscribing.

On the flip side, many users purchase the Adobe product suites at steep discounts, such as for students and teachers. Still, at $30/month for the student/teacher subscription, users will need to do the math to see if subscribing saves.

Users who buy a version of Adobe products and use them for years and years without upgrading would obviously pay more by subscribing than they do by laboring away on 10-year-old versions of Photoshop. But since $50/mo. is an easier pill to swallow than shelling out over two grand, or even $700 for just Photoshop, subscribing might be an incentive for some to modernize their applications and get up to date.

The online storage is a nice touch, but I am reminded of Apple’s MobileMe service that offered online space and then dumped all its subscribers off this year when it shut down the service. Also, users who think they’ll simply upload their editing files to the Cloud so they can work from many locations on different computers will certainly run headfirst into the bandwidth wall. But why dwell on the “what-ifs” if they never happen?

The Adobe Creative Cloud has far more positives to it than negatives, and it’s worth serious consideration to users of any of the Adobe products.

A special introductory offer of $29.99 per month for CS3, CS4, CS5 and CS5.5 individual customers is also available. Education pricing is available.

For more details, go to www.adobe.com or www.creativecloud.com.

For more details, go to www.adobe.com or www.creativecloud.com.