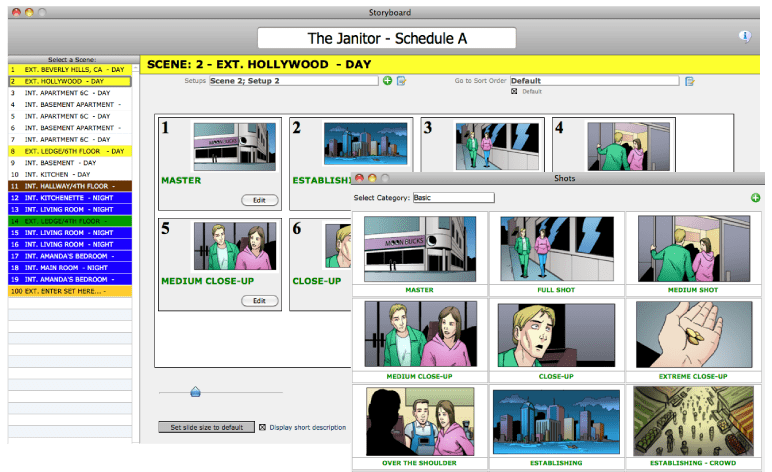 Share
Gorilla 5 is one of the few programs out there that integrates both pre-production and production elements -- but does it live up to its promise?

Gorilla 5 from Jungle Software is a software application for movie productions that includes scheduling, budgeting, storyboarding and contact management in the same program. It will import a properly formatted screenplay, break down the elements including scenes, locations, cast, props, wardrobe and more, and allow the producers to schedule the shooting days, notify cast and crew, and present detailed budgets to potential investors.

For example, if an independent producer raised only a certain amount of money for the production, the assistant director would be instructed to make the schedule work within the budget. Conversely, it’s often difficult to come up with an accurate budget until someone first breaks down the script and determines how long it will take and the resources needed to shoot it, i.e. the schedule. It’s the chicken and egg salads of the movie business, so to speak.

Having scheduling and budgeting in one program, then, allows the team to make changes to either or both sides and immediately see their impact on the other, and adjust accordingly. That’s where a program like Gorilla earns its value.

While Gorilla could be (and is) used by some Hollywood studios, it’s better suited for the independent production where the same user would be dealing with both scheduling and budgets.

Go With the Flow

While a user could jump around in Gorilla’s modules and enter and change data in the schedule, the props list, the salaries, budget, cast members, etc., it’s best to stick to the workflow defined in the Gorilla manual.

First things first, and that happens in the scriptwriting software, not in Gorilla. The user should go through the entire script, ensure that all the scenes are numbered and labeled correctly, then tag every single element that impacts the production. These include indications in the script about wardrobe, makeup, props, vehicles, animals, background actors, locations, stunts, special effects and more.

Once these elements are tagged in the script software, they are exported out to a file that Gorilla imports to begin the production process. (The script elements don’t have to be done in the screenwriting software; they can be manually entered within Gorilla as well.)

Launching a new project in Gorilla involves importing the previously tagged screenplay file. The whole script doesn’t come into Gorilla, just the elements such as scene numbers, locations, time of day, character names, etc. The elements are listed within each scene.

The producer or assistant director also enters additional production elements, as well as cast and crew, assigning them to characters and crew positions.

From there the user can begin making the shooting schedule, quickly moving the scenes around into logical groupings. Scheduling a movie shoot is more of an art than a science. One must factor in not only shooting all the scenes in one location at the same time, but also actors’ schedules to minimize their costs, logistics, weather contingencies, intricacies of each scene, size and experience of the crew and much more.

There is no automation for making a shooting schedule. It’s mostly a manual process. But Gorilla makes it easier by having most of the elements at hand to assemble a schedule and make changes quickly.

Later, in the budgeting module, the producer can assign salaries, fringe benefits, union rate cards, etc., to the cast and crew, and other costs associated with making the movie such as locations, rentals, and insurance. The budget list is extensive, and even a low-budget movie might have a 30-page detailed budget.

Gorilla offers several industry standard budget templates, with many elements already entered. The budget for a $150 million studio feature will have many different line items than a budget for a $25,000 indie movie shot on DSLR. Gorilla’s templates provide good starting points based on the size of the production.

The user can also import some of the budget information from an Excel spreadsheet. Many producers begin the process in Excel, and would benefit from moving that into Gorilla to tie into the schedule and cast and crew information.

When it’s time to roll the camera, the production can quickly print (or email) industry-standard call sheets and breakdown reports to cast and crew. The call sheets can even include maps to and photos of the locations.

On the financial side, Gorilla can keep track of expenses incurred and paid (although this would need to be re-entered into an accounting software like Quickbooks to actually cut and record checks.)

The budget reports are excellent, allowing for high-level view for potential investors down to extremely detailed line items. Just about every expense a movie would incur is built into Gorilla’s lists, and the user can also enter their own items and categories.

Built upon the Filemaker database, Gorilla employs a relational approach to its data. This means that the information entered into the program — such as scenes, page counts, characters, salaries and expenses — has relationships with other information that may not be directly tied to the main data.

In practice, the relational structure means that if a producer was to change one element, such as the day rate of a crew position or the cost of renting a location, this change would flow to all parts of the project where applicable and update the grand total budget instantly.

Having one person, such as an assistant director or unit production manager, break down all the elements in the script is, in essence, doing ten people’s jobs (and without their professional input.) Department heads such as props, art direction, stunts, etc., usually do their own script breakdowns, but that’s not possible from within Gorilla.

The ultimate production software would allow multiple users to enter and view the information in the script, making it interactive and keeping it updated. Gorilla, as with other scheduling and budgeting programs, is a single-user application. One person enters all the data and then distributes it to many.

Gorilla is not without its drawbacks. However, its competitors would have their own issues as well. It’s up to the user to decide which is the best application for his or her needs.

In my testing, I made a production schedule of shoot days for an actual short film I was directing. I made a mistake in the starting date though, and when I corrected the start date, Gorilla shifted all the shoot and non-shoot days, putting them all out of sync, and assigning the first day as a holiday instead of a shoot day.

After 20 minutes of manually readjusting my shoot dates, Gorilla popped up an error message saying “the first day on your schedule cannot be a day off or holiday.” But it wouldn’t let me change it from a day off to a shoot day!

I finally dumped the project altogether and restarted it in my older version 4 of Gorilla, which I found easier to use.

While it probably runs more efficiently under the hood, I found the update of Gorilla 5 to be less intuitive than Gorilla 4. Where Gorilla 4 was challenging to learn, there seemed to be some sense to it. The Gorilla 5 workflow was less clear to me. I seemed to hit dead ends when I thought I was building my schedule and budget logically. I recommend learning Gorilla 5 by following the workflow in the user manual.

Gorilla 5 touts its new floating menu bars as an improvement to the interface, but I found them to be a major annoyance. Sometimes there are two floating menu bars, sometimes one, depending on the module, but they continually get in the way of working on the screens. They constantly needed to be moved out of the way so I could see or get to parts of the screens I was working on. This is apparent even in their own training videos.

While I could adjust the menu bars to the top or sides to get them off of the main screen’s information, the program doesn’t save these preferences. So the next time I opened Gorilla the floating menus were back floating where I didn’t want them to be.

Another oddity was duplicate budget templates in the built-in sample budgets list. I deleted the duplicates from within Gorilla, and all looked fine — until I reopened the sample window again. The remaining sample budgets had lost all their values of crew positions, budget codes and pay rates. The only way to get them back was to fully reinstall the application.

But reinstalling is something Gorilla users are accustomed to. Since at least version 4, installing even a minor update to the application requires going thru a complete install process of the entire application.

There is no background upgrade, nor does Gorilla overwrite the prior versions. Instead, it leaves all versions on the computer. I currently have seven active versions of Gorilla on my laptop — 4.51, 4.7.0, 4.7.1, 4.9.0, 5.0, 5.0.2 and 5.0.3! By default, Gorilla saves schedules and budgets inside folders within the main application folder, not in someplace like My Documents that would stay safe upon trashing the old version folders from the Applications directory.

The old versions don’t hurt anything; it’s more of an annoyance that they are there, taking up disk space.

All in all, Gorilla 5 is a good application for independent producers, or full-time assistant directors or unit production managers who need a tool for budgeting and scheduling. The developers have an understanding of the moviemaking process and offer data fields for pretty much everything one could want. The reports are well-done. The sample budgets are detailed.

One of Gorilla’s top features is its Globals, data fields that can be used in many places. A sales tax, for example, could be set up as a global. Then in every instance where something taxable is purchased, the sales tax global would automatically calculate. Change the tax rate in one place and it will automatically update the entire budget.

Globals can even be imported from one budget to another. It can be a great time saver.

Gorilla 5 also includes a new Storyboard module. Directors, DPs, art directors and others will find this useful. Photos, drawings or other graphics can be added into the storyboards, These could be photos of the actual locations or more traditional drawings.

Gorilla also has an extensive collection of video tutorials online to guide users through steps in many of the modules.

Check out Gorilla 5 at www.JungleSoftware.com.

Check out Gorilla 5 at www.JungleSoftware.com.