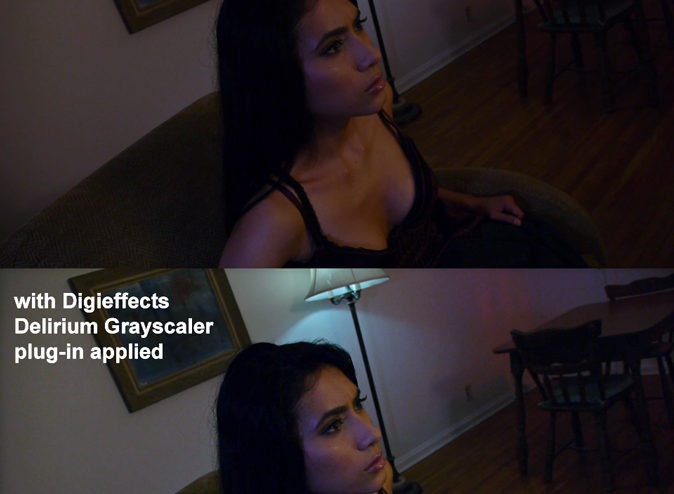 Share
People think it’s always sunny and warm here in Los Angeles, but I like to point out that we have four distinct seasons: fire, mudslides, riots and earthquakes. If one needed to represent L.A.’s seasons in a movie, Digieffects would be a go-to tool to get the job done.

The DigiSuite from Digieffects is comprised of three software products: Delirium, Damage and Buena Depth Cue, all now in version 2.5. These distinct plug-in applications give editors and visual effects artists a wide array of effects from fire, smoke, rain, fog, distortion and channel mapping to grain, scratches and jitter, and finally real-looking lighting and rack focus.

Delirium is a set of 44 effects in five categories: Phenomena, Color, Distort, Mood and Composite. Many of the effects are either particle-based creations, such as rain and snow, or lighting effects such as glows and blooms. Together they offer a rich set of tools for many types of effects.

The Phenomena category is perhaps the flashiest of the set. The plug-ins allow for the creation of many natural effects, including bubbles, electrical arcs, fairy dust, fire, fireworks, fog, muzzle flash, rain, smoke, snow and sparks.

The glow and night bloom effects can not only add vibrancy and a pleasant diffusion to video footage, but can also add punch to title and graphics effects such as logos and stingers.

A lot of cinematographers go to great effort to make their footage look good — free of shakes and jitters, debris on the lens or electronic malfunctions. Damage 2.5 takes that pristine footage and throws it under the bus, drags it down the road and smashes it to bits. On purpose!

For some vfx projects, such as commercials and logos, there is a lot of artistic freedom to play with the images. Damage 2.5 adds effects to footage such as aged film, shake and jitter, overexposure, signal interference and even busting up the image into pixels and blotches.

Damage can make digital footage look like Super 8mm film, old video or other vintage stocks. It can simulate the vertical rolls and squiggly lines that were common on TV sets in the rabbit-ear-antenna days.

Many visual effects have camera “shake” added to them to sell the realism and hide the effect a bit. Just about every action movie or TV series “shakes” the image during explosions, lightning hits, crashes, etc., to add some believability to the shot. Damage 2.5 offers quick control over the rotation, shake, blur and color separation in its destabilizing effect.

Digieffects also offers an interesting tutorial on creating a hologram effect using Damage. Although this effect has been in the Damage plug-in for a few years, there are still an endless number of adjustments that vfx artists can use to apply this effect in new and creative ways.

Buena Depth Cue adds near-3D effects to two-dimensional footage. Applying its effects to interim layers of the footage in After Effects, Buena Depth can add simulated depth to images, for example giving that shallow depth of field effect so popular with today’s DSLR moviemakers.

Buena Depth also offers a lighting effect that considers how the brightness of natural light sources weakens over distance from the source. This attribute of light is called falloff, and the falloff of the simulated lights of Buena Depth Cue can be adjusted so that the objects nearer the light are brighter than those farther away, and the shadows remain dark.

The Camera Mapper feature allows the vfx artist to simulate movement in 3D space using only a 2D, or flat, image. By carefully converting a still image or locked-off video shot into smaller pieces, the artist can position and manipulate these pieces in After Effects’ 3D space.

Camera Mapper provides an easy way to then add a realistic camera “move” to the composition, resulting in what looks like a dolly shot from what was only a still image or stationary video. The effect looks believable because the 3D space gives the illusion of parallax — the effect our eyes see whereby moving objects move at different speeds depending on their distance from our eyes. (Look out a moving car window and you’ll notice that the nearby object blur by quickly while the distant mountains barely move at all.)

Finally, Buena Depth Cue offers the flipside effect. It seamlessly mates two images, either stills or video, so that one appears to be the backside of the other. Think of two sides of a coin or a book’s front and back covers.

Flipside allows the artist to essentially twirl, rotate or flip an image and its applied reverse image sticks with it. This is hard to do manually in After Effects, but a snap with Buena Depth Cue.

With such a rich set of effects, plus more than 100 available presets to download for free, the DigiSuite of Damage, Delirium and Buena Depth Cue offer a nearly limitless set of effects for any editor or visual effects artists.

Digieffects provides a number of tutorials for users getting started with the products, or looking for some creative inspiration. The tutorials are well done, simple and straightforward.

I followed one of the tutorials and applied it to some footage I’m editing from my feature film Broken Spirits. The footage was shot on a DSLR and needed a boost to integrate into the other footage shot with a Red MX camera.

I was very pleased with the results quickly obtained using the Delirium grayscaler effect to give the footage a High Dynamic Range (HDR) look. It’s been shown over the years that it’s very easy to make your digital footage look worse, but it’s not so easy to make it look better. Delirium definitely improved the look.

Buena Depth Cue also gives digital a more pleasing, high-end look. Grading the look of digital video can be a tedious process with any software, as it involves many steps of small adjustments, but the end results are usually worth the effort.

In their base presets, some of the effects, especially the Delirium particle effects such as the sparks, electrical arcs, fire and explosions, tended to look a bit blown out and video-like. They reminded me of the effects seen in videotaped TV shows like Mighty Morphin Power Rangers or early MTV music videos. This can be the look you want. If you’re looking for more-realistic effects like in Transformers, you may need to spend some time adjusting the gamma and curves to tweak the Delirium effects to blend into your footage.

Particle effects are notoriously processor hungry, but Digieffects’ plug-ins ran with efficiency and ease on my Mac Pro system.

Delirium, Damage and Buena Depth cue are available as digital downloads from Digieffects at www.digieffects.com.

Delirium, Damage and Buena Depth cue are available as digital downloads from Digieffects at www.digieffects.com.