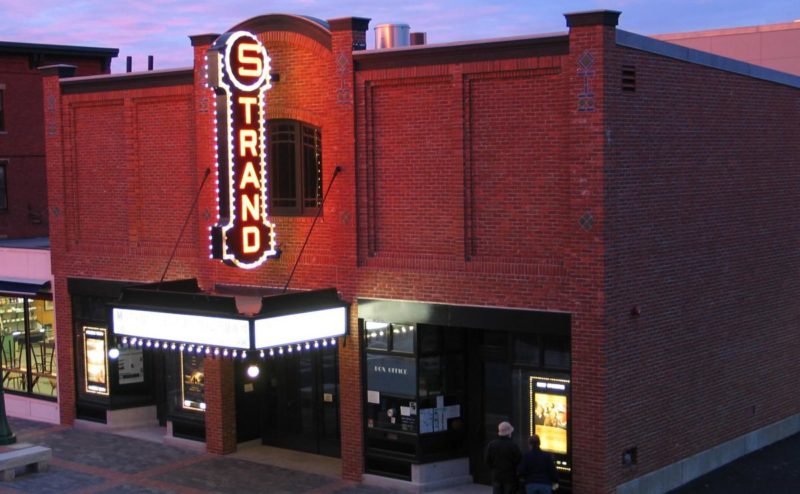 Theater Profile: More than 90 Years at the Strand

Share
In downtown Rockland, Maine sits The Strand Theatre, a modern source of entertainment with 1920s roots. From films to concerts to lectures, the Strand has plenty to offer and has proven to be an essential part of the Rockland community for decades. Is there an independent cinema near you that deserves some attention? Send your suggestions to news@newenglandfilm.com.

A rich history may not be a requirement of a movie theatre, but it certainly doesn’t hurt. Like other theatres we’ve profiled in this series, the Strand Theatre in Rockland, Maine has been around for a long time, and those years have cemented its importance in the seaside community. Today, the Strand presents films and live performances with a diverse range of cultural events for patrons to enjoy.

The Strand Theatre opened in Rockland in 1923. Built by Joseph Dondis, it thrived over the years, even during turbulent economic times, until the Dondis family sold it in 2000. Acquired by a nearby multiplex, the theatre sat empty from 2001 to 2005, much to public dismay, before a purchase and extensive renovation saved it in 2005.Today, the single theatre, complete with balcony, seats 350 and boasts an old-fashioned marquee outside.

Colleen Conlan lives in nearby Vinalhaven, off the coast of Rockland, and believes visiting the Strand is worth the trip. She recalls, “When our kids were small, we’d sometimes go to the mainland and spend the night. Part of that getaway would be to go see a movie at the Strand.” She adds that when “it was closed for a few years, [it left] a hole on Main Street.” Happily for her and the rest of the community, the Strand re- opened. To her, “it stands as one of the anchors of downtown Rockland, especially at night when it’s all lit up.”

The theatre hosts a wide variety of artistic events. October’s calendar included selections from the Camden International Film Festival, an experience festival founder and director Ben Fowlie describes as “amazing.” The Strand has been involved with the festival for several years, and according to Fowlie, “Filmmakers love the space for the way it looks and audiences love the space for the way it feels so it’s a match made in heaven.” Last month also featured lectures like “Cultures of Desire: An Examination of Art and Food” and “Education: An Economic Imperative for the Midcoast” along with screenings of Margin Call, Take Shelter, and The Way. In December, the theatre will show the new independent features Melancholia and Martha, Marcy, May, Marlene, the Met Opera Live series, and holiday classics White Christmas and National Lampoon’s Christmas Vacation. The theatre also frequently hosts concerts and live acts.

The Strand’s website proudly states that it is “the only survivor of the three movie theatres that served the Rockland area in the 1920s.” Its interesting history, stretching far into the previous century, along with its marquee and single auditorium and balcony, sets it apart from larger theatres where the inside looks the same no matter what city you’re in. Conlan says, “I love everything about it: the retro marquee, the lobby, the comfortable seats, and the eclectic blend of indie and mainstream films they show.” The Strand is also a business with modern sensibilities and technologies, and one that understands what its customers want. “For a town the size of Rockland, we are extremely lucky to have such an amazing venue to promote the craft of filmmaking,” adds Fowlie. “Very few communities this size have a start-of-the-art art house theatre at their disposal and very few art houses understand that going to the movies is an experience that should not be lost like the Strand does.”

Yet while its connection to the past and discerning taste in films are vital parts of what makes the Strand special, it survives and flourishes to this day because of its firm place in its community. Fowlie notes “one of my favorite moments each year are the crowds that gather below the Strand’s marquee each night. The gathering of audiences, artists and community is a powerful thing and it’s venues like the Strand that make that happen.”

Conlan still has a photo of a family visit to the Strand, a memory of what she calls “a fond summer evening.” She is a prime example of the importance of smaller, independent theatres like the Strand. She travels to Rockland because she is part of a larger community of moviegoers who are drawn to interesting film selections and a unique cinema atmosphere. Her memories of the Strand are connected to the family members with whom she has shared those experiences, and she noticed the Strand’s absence during the years it was closed. The Strand, and theatres like it throughout the rest of New England, means something to its loyal patrons. At its core, it’s a great place to catch a movie, but for many of the people who walk through its doors, it’s a little something more.

For a history of the Rockland Strand, information on upcoming special events, and
showtimes, visit www.rocklandstrand.com.

For a history of the Rockland Strand, information on upcoming special events, and showtimes, visit www.rocklandstrand.com.