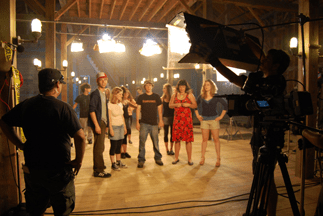 Movies From Marlboro: Taking the College Experience to a New Level

The Movies From Marlboro program is a film intensive program offered at Marlboro College, a small liberal arts college nestled in the hills of Southern Vermont. The program, open to both undergraduate and graduate students, allows for 25 students to earn both college credit and a professional film credit as they work on filmmaker and professor Jay Craven’s new film Northern Borders.

Craven, who leads the Movies From Marlboro program, is a local independent filmmaker whose works have appeared on PBS, Showtime, Star, and in over 43 countries around the world. In 1995 he received the NOVA Award from the Producers’ Guild of America as the most promising new theatrical motion picture producer of the year. He has also been awarded two grants from the National Endowment for the Arts for his films Where the Rivers Flow North and Disappearances.

A New England native, Craven has made it his moniker to create films rooted deep in cultural identity and location. With his production company, Kingdom County Production, which he founded in 1991 with his wife, Bess O’Brien, Craven has focused his efforts extensively on making films set in Northern New England. Most notably he has adapted the novels of Howard Frank Mosher into critically acclaimed and award-winning films. The adaptation of Mo’s novel, Northern Borders, is Craven’s selection for the film intensive program.

Chosen for its ‘distinctive northern frontier setting’ and colorful characters, Northern Borders is the story of young Austen Kittred, who is sent to live on his grandparents’ Vermont farm in the 1940’s. It is a coming-of-age story dealing with family relationships and growing up. Growing up is something students of the Movies From Marlboro program will have to do on the job, as the program’s ambitious and intensive schedule leaves no room for slacking off.

The 16-week program commences in January with an orientation followed by a weeklong expedition to the Sundance Film Festival in Park City, Utah. While there, students will take part in several film screenings and discussions with filmmakers, actors, and other film enthusiasts. As on any class trip, students are expected to absorb the culture and also appreciate the uniqueness of the opportunity and the caliber of filmmakers they will be meeting.

Upon their return from the festival, students and instructors will dive into the bulk of their academic course work with four weeks of intense classroom study. The program’s core courses focus on the literature and film that have emerged over the years from Northern New England. Such course work is essential to the development of analytical skills and comprehension of material when heading into the pre-production phase of the program.

Students will delve into such works as Russell Banks’ The Sweet Hereafter, Ernest Herbert’s The Dogs of March, and Howard Frank Mosher’s Where Rivers Flow North, as well as the poetry of Robert Frost and Adrienne Rich. All are considered to be works that illuminate the culture and characteristics of the Northern New England region.

In addition to texts, students will screen and examine various films such as Courtney Hunt’s Frozen River, Richard Pearce’s Heartland, Aki Kurosawa’s Ders Uz, Chris Eyre’s Smoke Signals, Erik Skjoldbja’s Insomnia, and Sara Polley’s Away From Her. In each of these films, the characters and themes are directly related to the location in which the story takes place. Students will further their studies by exploring the impact these films and other place-specific films have had on the world.

With a strong foundation of understanding to work from, students will then be able to visualize and eventually bring to life the page on screen. Students will be aided in their efforts with training courses geared toward their areas of interest. Once the academic portion of the program is complete, students will continue with their technical training straight through the pre-production phase.

The crew position a student will hold during the pre-production and production phases will be based on interest and ability. This is a great motivator for students, as the more effort and dedication one puts into the program, the more likely it is to pay off with garnering a key position on the production. Further enticement for working hard to secure a key position is that Northern Borders is being produced for national release and will be a SAG signatory production.

The production phase of the program is slated to begin after spring break on March 26th and wrap up shooting May 12th. Cost of the Movies From Marlboro program is $24,480, which includes room and board and travel expenses for the Sundance Film Festival. Upon completion of the program, students will have earned 16-18 academic credits and one professional screen credit. Students are encouraged to apply early for the program. Students from other colleges are welcome to apply for this distinctive opportunity.

The Movies From Marlboro program provides students with the necessary skill set to be successful in future productions. It combines classroom study and professional work experience. As in any college program, it requires collaboration and teamwork among, not only students, but also with professional filmmakers and the instructors leading the program. It is a unique learning experience for filmmakers, offering them the fresh vision of students, and for students it’s the wisdom and realism of professional filmmakers and filmmaking. It is certainly a program that takes the college experience to a new level.

To learn more about the program, please visit: www.marlboro.edu/academics/movies/.

To learn more about the program, please visit: www.marlboro.edu/academics/movies/.