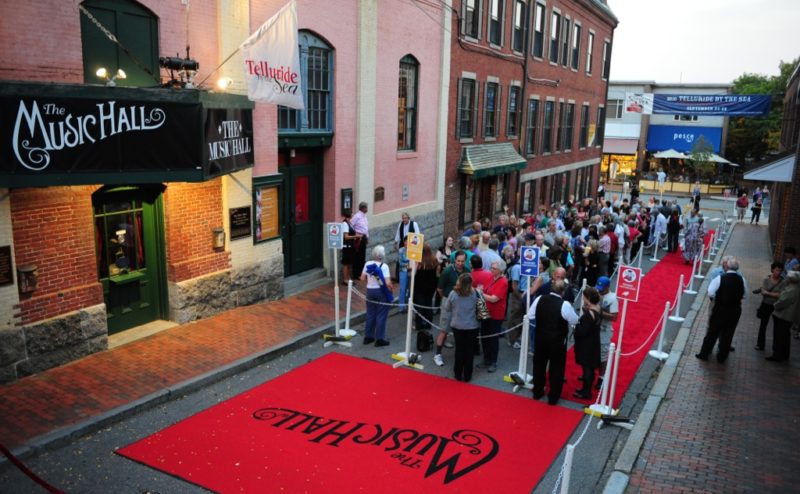 Theater Profile: Movies and More at the Music Hall

Share
Don’t let the name fool you. The words “music hall” may conjure up images of old-time variety shows, and, while there is plenty of live entertainment to be found at the Music Hall, this flourishing arts center has a more modern approach to providing people with a night at the movies. (Though if it’s old movies you’re looking for, they play those, too). Is there an independent cinema near you that deserves some attention? Send your suggestions to news@newenglandfilm.com.

Don’t let the name fool you. The words “music hall” may conjure up images of old-time variety shows, and, while there is plenty of live entertainment to be found at the Music Hall, this flourishing arts center has a more modern approach to providing people with a night at the movies. (Though if it’s old movies you’re looking for, they play those, too).

Located in downtown Portsmouth, New Hampshire, the Music Hall has two locations around the corner from one another: the Historic Theater and the Music Hall Loft. Once the site of a meeting house, the theater was rebuilt in 1878 after a series of fires and originally hosted plays, music, and dance. In the 1930s, the theater began mainly showing films, and went through a few different names and owners before becoming a non-profit performing arts center in 1987. It is supported by members and attracts a wide range of visitors from Portsmouth and beyond.

The Music Hall is unique in that, unlike other independent cinemas profiled in this series, film is only one aspect of what it offers. “This dynamic arts center urges patrons to Explore + Learn,” states the organization’s website. The Music Hall holds a variety of programs throughout the year, from concerts and comedy shows to writers’ series (which are broadcast on New Hampshire Public Radio) and children’s entertainment. It also offers tours and classes.

In this thriving performing arts center, film is one reason to go to the Music Hall. The beautiful architecture doesn’t hurt either. “I love the Music Hall building,” says Jane Robart, a resident of nearby Hampton Falls who has made many visits to the Music Hall. She notes that “the lobby is very unique and inviting” and the theatre is “dark and full of ‘earthy’ features,” making for what she calls “a real experience…. So different from the chain theatres.” The old-fashioned Victorian setting of the Historic Theater, complete with a large auditorium, stage, and balcony, contrasts with the newer Music Hall Loft, which hosts many programs and features a screening room for films.

Movies play at both locations, and like other independent theatres, the Music Hall distinguishes itself with its film selections. “Portsmouth is a smart and largely socially progressive community devoted to arts, history, food, fashion, living local but thinking globally,” says Executive Director Patricia Lynch. “We program independent films, are home to the NH Film Festival, and documentaries do very well along with quirky comedies and international film.” September at the Music Hall will see screenings of summer hits Super 8 and Midnight in Paris; documentaries Bill Cunningham New York, I Am, and Cave of Forgotten Dreams; and the independent feature Beginners.

The Music Hall also shows broadcasts from Lincoln Center and the National Theatre of London as well as with two ongoing series, “Screen Classics” and “Wildcard Movies.” In addition, “Film Matters” is a monthly series of screenings, typically documentaries, followed by a discussion. The theme is “Global Issues, Local Resources”; recent examples include screenings of Waiting for Superman and Queen of the Sun: What Are the Bees Telling Us? The discussion panel is “comprised of local community members who are experts on, or at the very least, well-informed-enthusiasts of, a topic or topics covered in the film,” says Chris Curtis, Programming Coordinator at the Music Hall. “These evenings present opportunities for folks to come together, see a high-quality film and then hear from people who are from among our community’s local resources with regard to the subject at hand – and also to ask questions of the panel or offer further insights.”

Beyond the films and programs that the Music Hall offers its patrons, it is also an important local business for New Hampshire. Lynch asserts that the Music Hall is one of “Portsmouth’s largest downtown employers” and an important part of its business community: “Between our live events and our film program we bring over 100,000 patrons to downtown who shop, park, eat, and enjoy our offerings generating 6.3 million dollars in show related spending that goes back into the local economy.”

The end of September will bring Telluride by the Sea to the Music Hall, a collaboration with the Telluride Film Festival that includes special parties and exclusive screenings of six features from the Colorado festival, an event Jane Robart says she is looking forward to. She mentions Sweden’s The Girl with the Dragon Tattoo and The Girl Who Played with Fire as recent films she’s attended at the Music Hall. “They usually will have some of the Oscar nominated films just before Oscar night,” she adds, citing A Single Man as one such movie she enjoyed. For her, “A night at the Music Hall, whether it is for a film, concert, author’s night or play, is an experience.”

For those working behind the scenes at the Music Hall, that is the kind of endorsement they work towards. When asked what distinguishes the Music Hall, Curtis mentions the Historic Theater, “a beautiful national treasure,” and the “brand new, hip” screening room at the Loft. For him, however, “what makes our On Screen offerings unique is that we program film for the art of it.” And as long as that kind of thinking pervades at the Music Hall, the seats will be filled.