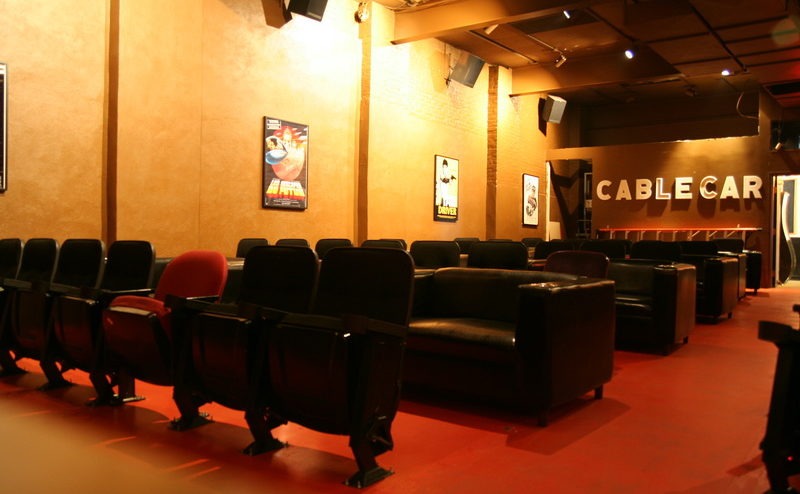 Share
We continue our series on local independent cinemas this month with the Cable Car Cinema & Café in Providence, Rhode Island. With its busy café, intimate seating, and concession stand that offers much more than popcorn and candy, the Cable Car is a popular spot for nearby students and Providence filmgoers. Is there an independent cinema near you that deserves some attention? Send your suggestions to news@newenglandfilm.com.

As summer heats up and the days grow longer, why not take a stroll through Providence, Rhode Island? As you head down South Main Street, keep an eye out for the awning that marks the spot of the Cable Car Cinema & Café. With a discerning film selection, series of programs and special events, and busy café, the theatre stands out in the busy city and offers an interesting, refreshing night at the movies.

Founded in 1976, the Cable Car is a small but vibrant part of the Providence community. The café serves food and drink, and is a popular spot to grab coffee. This is essential in a city like Providence, full of students needing caffeine (the theatre is neighbors with Brown University, the Rhode Island School of Design, Providence College, Roger Williams University, and Johnson & Wales University). The theatre caters to that student population and to Providence residents with a passion for film. Owner Daniel Kamil believes the theatre “reflects the identity of the community it serves” and is “an organic outgrowth of its place.” He points to a recent theatre renovation by local artists as an example, as well as his familiarity with his business’s customers and vendors.

This unique identity is evident at the Cable Car. The theatre is small, without traditional seating; instead, there is a mix of couches and individual seats. Movie posters and painted murals adorn the walls. Nicole Kenny, newly graduated from Providence College, says the Cable Car is “an awesome place to watch a movie because of its intimate, cozy atmosphere.” Fellow Providence College senior David Marcotte agrees and notes, “We need more entertainment outlets like this in the Providence area.” At independent cinemas like the Cable Car, the atmosphere can be as important as the movies playing, something that Chris Matteodo, a law clerk working in Providence, has noticed: “It seems that more people in the audience are drinking coffee and are true film lovers… It has a very trendy feel, and is a great place to catch an indie or foreign film.”

This last week of June, the Cable Car is screening Cave of Forgotten Dreams. Coming attractions include Buck, The Names of Love, and The Tree. The eclectic, thoughtful choices stand out in a summer movie season full of blockbusters both good and bad. Says Kamil, “We are lucky to be in a community with a rich and vibrant intellectual life which allows us to take more programmatic risks. The community is smart, politically engaged, and not averse to reading subtitles, enabling us to counter-program to the multiplexes which rarely show foreign fare.” In addition to these types of films, the Cable Car often hosts special programs, such as the Providence Children’s Film Festival, a showcase for filmmaker Ricardo Costa, and selections from the SENE Film and Music Festival.

Earlier this year, the theatre also hosted the Providence French Film Festival in partnership with Brown University. Shoggy Waryn, a French lecturer at Brown, helped organize the festival with the Cable Car and has only positive things to say about the experience: “The Cable Car offers a unique opportunity to have a campus based festival more open to the Providence community at large… The general atmosphere is simply more festive than any other location: great seating, great food and who would say no to a beer while watching a film.” He adds, “I cannot think of any other place in Providence where I would organize our French Film Festival. The Cable Car is not merely a cool location, it has also become a real partner.”

Frank Scheel is a Rhode Island resident who last visited the theatre several years ago with his wife, but the memory has stayed with him. “We saw films we would not otherwise see,” he says, “since they weren’t showing anywhere else. I heartily recommend the experience.” Luckily for the Cable Car, there are plenty of people ready to take that advice. The Cable Car’s café is often full of college students: customers Kamil says are vital to the Cable Car’s success, like rising Brown University senior Frances Liu, who has visited the café but has yet to see a film. Or Phil Ashworth, who graduated from RISD in 2008 and hopes to catch a movie at the Cable Car the next time he’s back in Rhode Island. Or Sage Elbot, a current Providence resident who says the theatre is on her list of things to check out in the city.

Kamil seems confident that the theatre will continue to be a destination for current and future customers, the filmgoers of Providence who appreciate the distinguishing details that make the Cable Car special. As he puts it, there are “not many places in the country like this. A 100-seat cinema showcasing the best movies out there in a comfortable and unique environment where you can swill some Brooklyn Lager and munch on a Vosges chocolate bar… in a word… heaven. Well, at least, my kind of heaven.”

Learn more about the Cable Car Cinema & Cafe at www.cablecarcinema.com/.

Related Article: Theatre Profile: The Customer is Right at the Roxy

Learn more about the Cable Car Cinema & Cafe at www.cablecarcinema.com/.