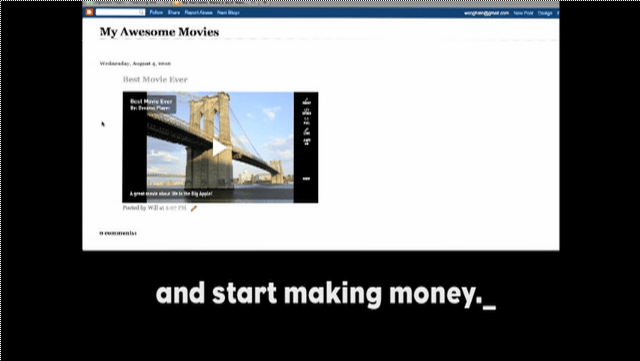 Digital DIY Distribution: Another Way to Be Heard

Share
A new kind of distribution is already here -- it’s digital, it’s DIY, and it’s just a few clicks away. Is it for you? This primer takes you through various services like Dynamo Player, Distrify, EggUP, and Yawma to learn what they're all about.

You know that a field is new when it’s not even clear what to call it. A fresh kind of DIY digital distribution has been emerging very recently on the web, and its tools are providing a way for filmmakers to sell almost directly to their audience and leverage social media at the same time. Instead of going through traditional distribution sources, filmmakers can now turn to several services that enable you to embed your trailer on a website and allow viewers to click through the trailer to quickly and easily buy a copy of the film.

This set of options already includes services like Dynamo Player, Distrify and EggUP, and Yawma is planning on offering something similar later this year. What their services do is make it easy to put a point of sale almost anywhere on the web while still returning a relatively high percentage of revenues to the filmmaker. They don’t have the built-in exposure of iTunes or Netflix, but they are cheaper to set up.

What this means in practice is that audiences can get access to your film and often even watch it directly through your Facebook page or through the site of a fan who has simply added a window to their own site. This ease of purchase was an advantage for Felicia Ptolemy, producer of Transcendent Man: “By eliminating the need to go to another site to watch the film, we’ve captured the audience interest at its height,” she noted in a recent guest post about Dynamo Player on the blog Hope For Film.

Of course, distribution fees are on every filmmaker’s mind. Pricing is similarly structured for Distrify and Dynamo Player: They both take up to 30 percent of sales revenue. Dynamo Player offers free hosting and doesn’t charge any other fees, and Distrify is currently offering its “Pro” package — including hosting — for free until the end of the year for filmmakers who sign up now, while Distrify is still in beta. Peter Gerard, managing director of Distrify, said that this will deal will finish when they end their beta period at the beginning of July.

For its part, Yawma’s CEO and founder Thomas Brooke said they would be offering 60 percent of revenues to filmmakers when they make their own tools available. For all of the above, there may be transaction fees levied by banks or PayPal that also would factor into the money actually collected by filmmakers.

One of the ways these systems differentiate themselves from more traditional distribution is by giving “affiliates” — people and sites who promote the film — a cut of the revenues. So, for example, when a fan posts the tool on their Facebook page, in some cases they can get a percentage every time someone purchases the movie through them. Affiliates’ percentages can cut into the filmmaker’s bottom line, but it’s worth keeping in mind that by offering the incentive of shared revenue, filmmakers may end up making more money by having more promoters of the film. On Distrify, affiliates can earn five percent of sales, but only 2.5 percent of that is taken from the filmmaker’s cut, though the filmmaker can offer even more. EggUP also offers an affiliate program with controls over how much the affiliate gets. Dynamo Player has said that an affiliate program is in the works, while Yawma indicated that its service, when operational, would offer an affiliate program that did not take anything out of the filmmakers’ percentages.

In general, the tools that Yawma is planning to develop over the next several months are somewhat distinct from the other three mentioned above. Brooke explained recently that the widget that will be provided by Yawma would direct potential customers to their online store, which will only feature content vetted by Yawma. “It’s intended to be a curated store,” Brooke said. On the viral side, they will be paying particular attention to social media, but eschewing e-mail: “We think that’s a pretty archaic way of sharing,” he explained. (The other services offer ways to share via e-mail.) Another difference: Yawma runs Groupees, a site that offers a special kind of flash sale that provides buyers with extra content when a buying threshold is reached. Brooke said that the first Groupees event featuring a film would take place in early June.

A big question looming over any distribution method, of course, is whether it can prevent piracy. All three existing tools include anti-piracy measures. For example, “If your ‘Egg’ is in an illegal bit torrent or any other file-sharing site or platform, it transforms it from a piracy tool to a marketing tool,” EggUP’s Lucero said. EggUP also uses other anti-piracy technology.

While all the services expressed concern about piracy, digital DIY distribution is its own anti-piracy effort in some ways. “Distrify is built on the philosophy that if something is made available at a fair price, people will buy it rather than pirate it,” explained Distrify’s Gerard. “What we want to encourage is micro-businesses among film lovers.” Dynamo Player CEO Rob Millis echoed this idea, saying, “The biggest protection we have against piracy is making it easy to pay for something of quality.” And, he added, “Most people want to pay for content.”

So, How Can You Use These Effectively?

The next question, of course, is whom these tools are useful for and how to deploy them. Orly Ravid, founder and co-executive director of the Film Collaborative, thinks they can work for established, popular projects as well as smaller ones. (She recently detailed all of the methods examined here in another post for the blog Hope For Film.)

A filmmaker with a lot of awareness buzzing around his movie “can monetize the film as readily on his own site as he can in a highly trafficked store such as iTunes, especially if his site and social networking pages are well trafficked,” Ravid pointed out. “Of course the margins are better when they come to you,” she said, instead of going to iTunes or another store that takes more of a cut than DIY distribution does. But she also pointed out that DIY digital distribution can be a useful alternative when your film can’t get distributed through a bigger store like iTunes and may not do much business there anyway. In sum, digital DIY can help filmmakers on both ends of the existing awareness spectrum.

She also noted that “numbers on cable VOD and iTunes can be as low as any DIY solution and numbers via DIY can be quite high,” so it can depend heavily on the filmmaker’s ability to market and distribute effectively.

None of these services demand any exclusivity of distribution, and all of them offer controls on the regions that can be sold via the player, so this kind of distribution can work nicely even with a distribution deal already in place for a particular region. They might even be one more outlet that helps you avoid an exclusive deal that won’t pay off. A disillusioning experience with more traditional distribution was one of the reasons that Peter Gerard was driven to create a new means of delivery. Sometimes, he said, “You basically sign the contract without thinking about it and wind up regretting it for years.”

It doesn’t yet look like these methods are distribution methods in and of themselves. “I haven’t heard of any serious numbers from digital DIY yet,” said Ravid. “Nothing in the thousands ” — in either downloads or dollars — “but it’s also brand new.” She said she would be co-authoring a digital case study book coming in September that would include some real figures.

Digital DIY distribution can round out an existing distribution effort. For Cowboys in Paradise, a documentary about European women’s romantic affinity for the men of Bali, director and producer Amit Virmani used Dynamo Player as one part of a distribution plan that already included iTunes. DIY distribution didn’t rely on existing networks he wasn’t familiar with, like broadcasting: “[Broadcasting] is an important revenue channel for doc filmmakers, but it’s also heavily reliant on existing relationships between commissioning editors and sales agents and distributors,” he explained. Another big factor was that the audience was spread out: “Interest comes from everywhere, only not in enough numbers to justify opening the film in any one city.”

He suggested that one thing that drew him to Dynamo Player was “transparency:” “I know several DIY distribution enablers who’ve screwed indie filmmakers over real good.” Overall, Virmani seemed to be a real fan of Dynamo Player. (It’s not clear how representative Virmani is of customers, however, since I wasn’t able to get feedback from any other users of these services.)

As for how to maximize the DIY effort, Dynamo Player’s Millis suggested that a big player set in an uncluttered Web page is more inviting. Also, he said, “A lot of it is finding that sweet spot of pricing” between too cheap and too expensive. “People say, ‘I was going to charge $25 for the DVD — I should charge at least $10,’” he said, but he thinks they should go for $1 for shorts and $1.99 to $4.99 for feature length films. Instructional videos, which have a lot of replay value, might sell for more, however.

More generally, however, many of the strategies you use to maximize digital distribution like this are the same you’d use to push your work through means of distribution. As Orly Ravid said, “There are no easy tricks to anything.” Distrify’s marketing director Andy Green likewise made suggestions that would hold for other distribution plans, saying, “It’s not going to work if people don’t have or don’t look for an audience.”