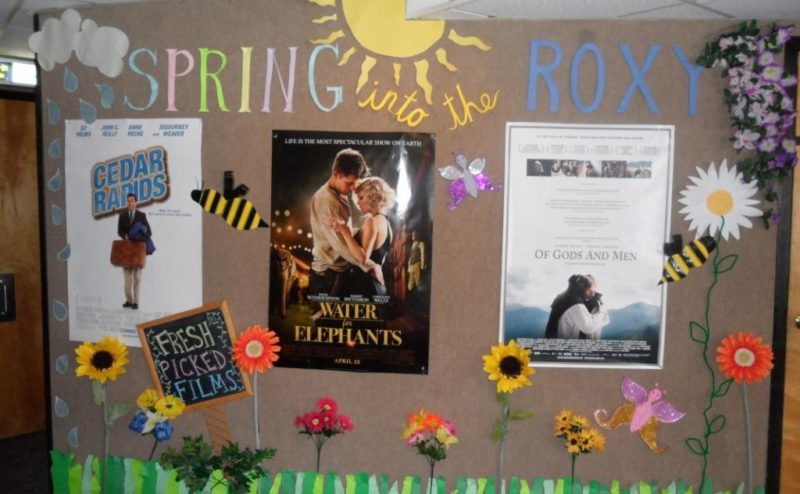 Theatre Profile: The Customer is Right at the Roxy

Share
In the heart of downtown Burlington, surrounded by shops and restaurants and within walking distance of the University of Vermont and Champlain College, sits the Roxy. The family-owned business has been voted Best Movie Theater for several years in Vermont’s Seven Days’s Daysie Awards. Is there an independent cinema near you that deserves some attention? Send your suggestions to news@newenglandfilm.com.

As we continue our series on local independent cinemas, we turn this month to Burlington, Vermont. As previously discussed in our profiles of the Brattle Theatre and Community Film Institute, independent theatres thrive in communities that support them. And this month, the name on everybody’s lips is gonna be… the Roxy!

Independent, family-owned businesses aren’t as prevalent as they used to be, so perhaps it’s fitting that independent cinemas often retain some old-fashioned charms. Sometimes it’s the classic films they screen, but other times it hits you as you walk in the door. The Roxy is one such theatre. Maureen Fitzpatrick, a student at Champlain College, says she enjoys seeing movies at the Roxy because of that “old-fashioned feel:” “Each theater is small and you can feel the history in the building… I also love all of the old theater decor they have in the lobby, and the big poster of The Wizard of Oz in the stairway.”

The vintage touches hearken back to Old Hollywood glamour, but employees of the Roxy work hard to stay current in their film choices. “The Roxy strives to be the independent film hotspot for Vermont, and we succeed!” says Cassandra Stirling, who has worked at the Roxy for eight years. Burlington may not be the biggest city in the Northeast, but Stirling thinks the Roxy’s screenings measure up to what’s playing around the country: “Our selection definitely makes us one-of-a-kind. Depending on the week you could come in and find several foreign films, subtitled and brilliant… home-grown movies from [Burlington]… [or] fundraisers or educational films to get our audience thinking about the world around them.”

Large theatre chains sometimes show foreign films, but filmgoers can more reliably find a taste of world cinema at independent theatres. “The majority of [the Roxy’s] customers seek out independent and foreign films, which we are proud to provide them,” says manager Lindsay Fantom. What distinguishes the Roxy from bigger theatres is that it can cater to what its customers want to see. Theatre owner Merrill Jarvis III believes “One of the many aspects that make the Roxy successful is educating our customers,” often through foreign and independent films that “do not receive the mass media exposure that Hollywood blockbusters do.”

The Roxy’s mission to educate extends to its special events. In March, the theatre hosted a fundraiser screening of Miral with its Oscar-nominated producer Jon Kilik, eventually raising over $1,800 for the UVM Film and Television Studies program. Extending their vintage feel beyond movie posters, in the past the theatre has also offered wine tastings at showings of films like Blood into Wine and Bottle Shock.

Like all movie theatres, the Roxy works hard to entertain, from the informational flyers in the lobby to the mix of popcorn, candy, and healthy snacks at the concession stand. But beyond the standard feedback — “The seats are comfortable,” “The sound is too quiet,” “Why did they do that to Natalie Portman’s eyes?!” — the Roxy’s staff is interested in finding out what its audience wants to see. Says Jarvis III, “Not only do we try to educate our moviegoers, we also receive suggestions about new and exciting films that they would like to see. The Roxy’s knowledge combined with our excellent up-to-date film enthusiasts’ insight, allows us to provide a mix of films that appeal to the community.” And at the Roxy, this isn’t just talk.

“[The Roxy] is dictated by residents of the Burlington area,” says Zack Setian, a junior at UVM, “so we get the movies that are in demand here, not ones that are chosen for us.” Adds Fitzpatrick, “[the Roxy has] a more diverse selection of movies, playing things that more commercial theaters might overlook because they’re not ‘Hollywood’ enough. This definitely makes it stand out from the other movie theaters in and around Burlington.” Setian also appreciates the Roxy’s “significantly cheaper” tickets in comparison to chain theatre prices, which certainly makes a difference in a college town. While Fantom notes that many of the Roxy’s audience members are from Burlington, she adds that “many of our patrons include a large majority of out-of-state students who attend UVM, Champlain, and other nearby colleges.” Fitzpatrick agrees, and notes that college students “make up a big portion of the customers at the Roxy, just as they do at most local businesses.” To this end, the Roxy offers a student discount when customers present a college ID.

“At the Roxy the staff is like a family,” says Jarvis III, and this close-knit spirit has made the Roxy a welcoming place for its customers. Fitzpatrick, who graduates this year from Champlain, recalls visiting the Roxy for the first time as a freshman to see Julie Taymor’s film Across the Universe with a friend. Nearly four years later, she names it as her favorite experience visiting the Roxy. Scanning the Roxy’s showtimes for the last week of April begs the question: what film is leaving an impression on audience members right now? Is it Of Gods and Men, an award-winning French drama? Perhaps the most recent adaptation of the classic novel Jane Eyre? Is it the documentary Wretches & Jabberers, or the Robert Pattinson/Reese Witherspoon romance Water for Elephants? Whatever the choice, the staff at the Roxy can sleep soundly knowing they did their part to provide a great night at the movies; Jarvis III assures us that after asking for movie suggestions, “99.9% of the time our customers are thankful for steering them to the correct film.”

Learn more about the Roxy at http://merrilltheatres.net/.

Learn more about the Roxy at http://merrilltheatres.net/.