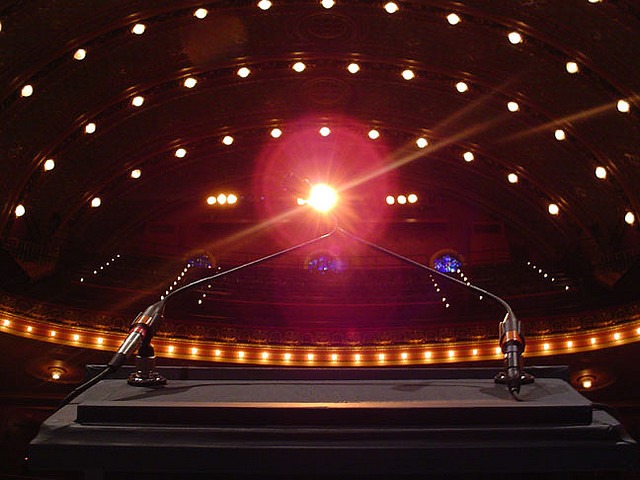 Rollin’ Out The Red Carpet for Emerson College EVVY Awards

Share
On May 14th, the Cutler Majestic Theatre at Emerson College will play host to the EVVY Awards, a student-run organization modeled after professional award shows that recognizes student talent and achievement.

The EVVY Awards at Emerson College was founded in 1981 by students Glenn Meehan and Martie Cook to recognize student achievement in television. The ceremony has since grown to become the largest pre-professional production in the country using multi-cameras and live switch. It has also expanded its award categories to include video, film, writing, audio, photography, new media, and marketing.

Being established by students and run by students, the EVVY Awards are unique in that they provide a hands-on learning experience for hundreds of Emerson College students in one of the largest student-produced live TV shows in the nation. “The campus is ready to party, to network and to root on our friends in the biggest production of the year,” says Emerson junior and EVVY Awards executive producer Pat Lambert. Students work tirelessly all year to develop a product worthy of submission. For many, the possibility of winning an EVVY Award undoubtedly outshines the almighty diploma given at graduation.

Once received, student submissions are sent out to both local and national industry professionals in their respective fields for judging. Nominees are announced three weeks prior to awards night, and the winners are revealed live on stage. As with years past, this year’s judges represent an array of prestigious individuals in the field of communications, some of whom are Emerson graduates.

This year’s judges include Alan Higgins, a writer and producer for The Daily Show with Jon Stewart; Rob Paine, producer of the Academy Awards; Gary Mester, winner of The Kodak Award of Excellence in Black and White Photography; HB “Buck” Lewis, character designer for Kung Fu Panda and Ratatouille; Marc Dube, producer and writer for CSI:Miami; and Morgan Foehl, editor for Rescue Me.

In addition to judging student submissions, many alumni have given back to Emerson and the EVVY Awards by stepping in to teach classes and assisting with the production of the Awards show itself. It’s not uncommon to have the likes of actor Henry Winkler stop by and coach students on monologues or have Friends executive producer Kevin S. Bright advise on special projects such as the Emerson College Lady Gaga Lipdub Music Video.

The music video, a new addition to the EVVYs and created specifically to promote the 30th anniversary of the EVVY Awards show, showcases the talent, creativity, and school pride of over 400 students both in front of and behind the camera. It’s “a viral sensation that went on to become one of Emerson’s most popular productions yet,” says Lambert. The nine-and-a-half minute video was released on YouTube and, thanks to social networking sites, spread like wildfire, eventually catching the attention of local news agencies.

Also new to the EVVY Awards this year is the Vocal Performer category. This new category, which branched out from the Original Song category, began with auditions in November 2010 in which over 100 students tried out. Eventually the producers chose 10 semi-finalists. “Their performances were recorded and sent out to three industry judges and for a popular vote,” says Lambert.

The fan polls made up 25 percent of the overall vote, collecting over 120,000 votes. The selections of judges, Eric Hutchinson, a singer-songwriter and Emerson alum, Renee Grant-Williams, an industry vocal coach, and Don Grossinger, a mastering engineer, comprised the remaining 75 percent, whittling down the singers to the top three. These performers will have a package video shot about them showcasing their path, from audition to awards night, aired during the show prior to their performance. A winner will then be decided during the show via live text message voting.

Although the EVVY Awards show is primarily to honor student achievement, come awards night, students will not be the only ones to grace the stage and walk away with an EVVY Award. Each year, an Alumni Award of Distinction is also handed out “to an Emerson Alum recognized as an industry leader whose passion for their work and dedication to promoting the aims and ideals of the college make them a role model for generations of Emersonians to come,” notes Lambert. Prior recipients for this honor have included comedian Jay Leno and Will & Grace producer Max Mutchnick.

The special distinction award nominees and winner are selected by the show’s producers, advisor and members of the faculty and staff. “A list of potential recipients is drafted and the committee selects from there, taking into account the recipients recent work and involvement with the college and how it will positively impact or recognize their career,” explains Lambert. This year’s recipient is actress and television personality Maria Menounos.

Despite heading into its 30th year, this year’s award show is expected to be very new and very monumental. “It’s a celebration of how the EVVY Awards have grown over the last 30 years as an institution and explores what it’s like to be in college in this great city,” says Lambert. A group of twenty EVVY directors, hosts, producers, and writers of EVVY awards past are scheduled to return to Boston and to Emerson College to present awards celebrating the work of current students and the 30th anniversary of the EVVYs.

The show will have an exciting opening number and amazing pop performances as do most professional award shows, but, as Lambert says, “what most awards show have is celebrities, what we have is students who become celebrities.” The EVVY Awards is an educational and social organization that gives students the opportunity and experience necessary to succeed at the professional level by recognizing the achievement and talent, and, in many ways, the foundation and institution, which has gotten them there.

For more information about the EVVY Awards, please visit http://evvyawards.org/evvy30/.

For more information about the EVVY Awards, please visit http://evvyawards.org/evvy30/.