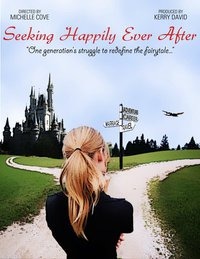 Share
Local writer and editor turned filmmaker Michelle Cove debunks the myths of single women in her new documentary Seeking Happily Ever After: One Generation’s Struggle to Redefine the Fairytale.

As the editor of 614:the HBI ezine, an online magazine directed at generating dialogue on hot topics for Jewish women, Michelle Cove is no stranger to combating stereotypes and presenting the world with a more modern and moderate view. Her new feature length documentary, Seeking Happily Ever After: One Generation’s Struggle to Redefine the Fairytale, is steadily gaining the attention of filmgoers and is described by critics as an “impartial and unbiased view” into the world of being single and, in particular, being a single woman. Now currently working on her third book, Cove spoke with NewEnglandFilm.com about the development of her film.

K. Correia: What was the inspiration behind your documentary Seeking Happily Ever After: One Generation’s Struggle to Redefine the Fairytale?

Michelle Cove: In 2007 I noticed a big increase in the number of stories about women waiting longer to marry than ever before, and I was interested in why this was happening. But all of the stories were reporting statistical numbers, and not how women feel about it. I also felt that the media, in general, presented single women as either totally desperate or so career driven that they didn’t think about marriage. As a woman who had been single in my early 30’s and had a lot of single friends, neither of these extremes felt representative. So I began to think about the idea of putting the camera on single women and letting them tell their own story. It was time for single women themselves to weigh in on this social phenomenon.

KC: How did you go about gathering information for the documentary and finding candidates to interview?

Cove: I’d never so much as made a home video. I bought a video camera for $200 and hit the streets of Boston. I started interviewing single women about their lives and that’s how it all started. I continued interviewing single women around Boston, and then in New Haven, New York City, and other locations. I then joined forces with producer Kerry David in Los Angeles and she started filming single women around the L.A. area. I created a survey for single women to fill out about the highs and lows of being single, which about 100 women filled out. Eventually, we realized we had to film single men as well to really tell this story. I also interviewed numerous experts from a variety of fields.

In terms of finding candidates, we’d approach any woman not wearing a wedding ring who seemed to be in the right age group. What was amazing was that almost every single one of them, barring maybe two, stopped whatever they were doing and agreed to an interview on the spot about being a single woman today. And they were so incredibly honest and brave with their feelings. I think, in part, this was because they were relieved to hear questions other than “Why are you single?’ and “Are you too picky?” and “Are you dating anyone?”

KC: As a writer and editor, what prompted you to make the move into documentary filmmaking?

Cove: Even though my background is in journalism, I felt that this story had to be done in film format. So much of telling this story, is seeing the nuances in women’s faces as they grapple with really personal and complicated topics. It’s in their expression and the way they move their bodies and pause before answering. I wanted audiences to see the mental grappling and processing they were doing, not just the tidy quote after they had figured out the answer.

KC: In addition to the documentary you’ve also written a book, Seeking Happily Ever After, Navigating the Ups and Downs of Being Single Without Losing Your Mind (and Finding Lasting Love Along the Way). How does the book expand upon the topics discussed in the documentary?

Cove: I wrote the book after I was done filming, even though the book was published first. I wanted the film to open up questions and conversations, and my producer Kerry David and I agreed that we didn’t want to give advice or prescriptive answers. That’s not the role of a documentary to me.

As a writer and women’s advocate, I felt unsatisfied leaving it with questions. I had learned so much over three years of talking to single women and men and experts; plus I had so much of my own experience in being single that I’d learned from. So I wrote the book to teach single women how to tune into their own needs in a culture obsessed with marriage.

There are 12 chapters, and each chapter looks at one of the common stages of being single, such as “The Soulmate Seeker” who wants a husband right now, or “The Organic” who would like to marry but wants to find someone the old-fashioned way, or “The Trailblazer” who has no interest in marriage and needs a new model. Unlike most books for single women, which tell them they have a major defect, I wrote this book with the assumption that most single women are just fine as they are, and need strategies for taking charge of their love lives.

Screening dates will be posted on the film’s website at www.seekinghappilyeverafter.com. Copies of the book are available through Amazon.com.

Screening dates will be posted on the film's website at www.seekinghappilyeverafter.com. Copies of the book are available through Amazon.com.