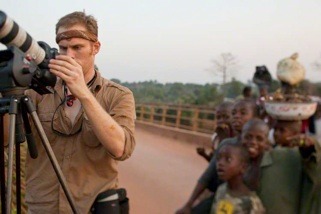 Share
Ring in springtime this month by checking out the world's largest student film festival at Brown University or by shooting off a submission to the Kahbang Film Festival on being 'MaineStream.' Read on for opportunities, industry buzz and happenings in the local industry. To submit news, email news@newenglandfilm.com.

The Connecticut Film Festival runs April 6–10 in Danbury. Highlights include an opening night fundraiser, panel discussions, and the Connecticut premiere of What If. Festival passes are available. Visit http://www.ctfilmfest.com/ for the full festival schedule and more details.

Cape Cod’s Inn at the Oaks hosts the workshop “From Screenplay to Screen — What you need to know to be a successful screenwriter” April 15–17, presented by Harvard Square Scriptwriters director Scott Anderson. Cost is $495 for single occupancy, $400 for double; fee includes two nights stay at the inn, breakfast, wine and cheese reception, and an individual meeting with Anderson. Call (877) 255-1886 to register and read more at http://www.innattheoaks.com/workshop-events.html#From%20Screenplay%20to%20Screen.

Maine hosts the Lewiston Auburn Film Festival on April 2nd. Over 70 films will screen at a variety of venues; festival passes are available. Go to http://www.lafilmfestival.org/ for more details.

Vinfen’s 4th Annual Moving Images Film Festival will be held April 16th at Boston Stuart’s Street Playhouse. The festival presents films by and about people with psychiatric and developmental disabilities. Screenings include Temple Grandin, When I’m Not Alone, and Unlisted: The Story of Schizophrenia. The festival is free and open to the public. Visit http://www.vinfen.org/news-events/film-festival/ to learn more.

Images Cinema in Williamstown, MA presents a Sandi DuBowski film series on April 7th. The film Trembling Before G-d screens at 6:30 pm, followed by a Q&A with director DuBowski at 8:00 pm. A Jihad for Love, produced by DuBowski, will screen at 9:00 pm. Learn more at http://www.imagescinema.org/events.

Documentary Filmmaker Frederick Wiseman will be the keynote speaker for the sixth annual Roving Eye International Film Festival. The event, which takes place on Friday, April 15th at Roger Williams University (RWU), examines the mission of the U.S. Juvenile Court as seen through the lens of Wiseman’s landmark documentary, Juvenile Court. The programming will include a free public screening of his acclaimed film and culminate in a panel discussion and audience Q&A at 6:00 pm at the RWU Field House. For more information visit http://www.film-festival.org/RovingEye.php

The Woods Hole Film Festival is holding a weekend long workshop, “The Professional Actor’s Life,” from April 30th to May 1st at The Woods Hole Inn. The keynote speaker is Oscar-nominated actor Sam Waterson. The cost for the workshop is $250. To learn more or to sign up visit www.woodsholefilmfestival.org/2011/pages/the-actors-life-workshop-2011 or call (508) 495-3456.

Sarah Jessica Parker has been spotted in Boston recently filming the upcoming feature I Don’t Know How She Does It; read more at http://www.boston.com/ae/celebrity/more_names/blog/2011/03/sarah_jessica_parker_filming_a.html. Also in Massachusetts is Kevin James, who will film Here Comes the Boom around Quincy this spring.

Rhode Island’s Eagle Peak Media debuts their documentary Behind the Hedgerow: Eileen Slocum and the Meaning of Newport Society on WSBE/Rhode Island PBS April 6th at 8:00 pm. The film was the opening night selection at the Rhode Island International Film Festival. Read more at http://www.behindthehedgerow.com/.

Award-winning actor (and Emerson College alum) Henry Winkler dropped by his alma mater this week to teach a master class to sophomores in Associate Professor Scott LaFeber’s Musical Theatre class. Winkler is in Boston until June shooting his latest film, a romantic and buddy comedy titled Here Comes the Boom with Kevin James and Salma Hayek. According to the report, ‘He listened to and then advised the students on their monologues and vocal performances. Following words of advice and encouragement, he also gave each student a big hug.’ For the full story, visit the Emerson College website.

It’s your last chance to enter the Nantucket Film Festival! Extended deadline is April 4th. Visit http://www.nantucketfilmfestival.org/ for submission fees and to download an application.

The Roxbury International Film Festival is currently accepting submissions. Films must be produced, directed, and/or written by or about people of color, with some preference given to past or current residents of New England. Submission deadline is May 15th. Visit http://roxburyfilmfestival.org/ to learn more.

Bangor, Maine’s Kahbang Film Festival is currently accepting entries for this August’s festival. Categories include “Gen-Next,” “LMFAO,” and “MaineStream.” Regular deadline is April 8th, late is May 8th, and extended is June 8th. Check out http://www.kahbang.com/film/submit-your-film to learn more.