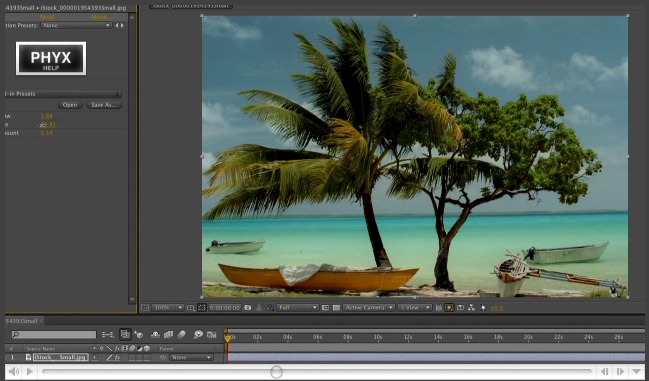 The PHYX Is In: A review of PHYX color software

Share
Sometimes if it ain’t broke, you still might want to PHYX it. This new color tool selectively controls colors and saturation for your video.

While many of the functions that PHYX performs are also available in other products, the ease of use and low price of PHYX give editors a great option to high-priced all-inclusive plug-in suites.

Using PHYX is as simple as using any plug-in. Simply drag the filter onto a video file and its base parameters are instantly applied. For many effects, very little tweaking may be required. Which is a good thing, because the PHYX filters have very few adjustment options. This can make the job quick and easy.

By now most editors are familiar with the so-called bleach bypass looks as seen in movies like 300 and Saving Private Ryan. In fact, it’s almost de rigueur to apply this look to any war movie.

PHYX’s version of bleach bypass delivers just what it promises. Desaturate the colors, blow up the highlights, crunch the blacks and shift the color a bit greenish. Boom, done.

This filter adds diffusion to the dark areas of a video clip. Diffusion is sort of a glowing blurriness. Just a touch of this can improve some video clips, especially older standard definition files.

I’m not the first user who thinks this filter might be more aptly named selective de-saturation. The filter does not boost saturation at all. Instead, it allows the editor to select any color in the video clip and desaturate that color only.

That’s how it should work in theory. However, in reality there are no pure colors in most video files. The filter works great at what it does. But if, for example, the editor wants to desaturate someone’s bright red pants or a yellow mailbox, it’s quite likely that those colors are also found elsewhere in the image. And those instances would be desaturated as well.

Also, many objects are made up of ranges of colors. So isolating a color without also affecting similar colors is very difficult. This is not a knock on PHYX. As I said, it does its job admirably. The same color-bleeding issue would arise with any similar tool, as even Photoshop users can attest.

So if you think you’ll want to tone down a color in a shot, try to do it when shooting, or else take considerable care in designing the shot so that there are no similar colors within it. Post production magic wands can wield only a limited amount of magic.

This could be called “shift OR suppress,” as it’s really two tools within one drop-down menu.

Whether shifting or suppressing, the editor still retains control over the color information of the rest of the image.

When people hear Technicolor they think of the richly colored movies of the 50s and 60s. However, before that 3-strip process was created, a 2-strip Technicolor process was invented not long after the motion picture came into being.

The Techni2Strip filter in PHYX is modeled after the older 2-strip process, which is sort of like colorizing black and white film. It’s that kind of effect.

PHYX users can adjust the amount of process that’s applied, and also adjust the blue in the image. This can result in some neat effects. Be advised, a little tweaking goes a long way.

Like most color-grading or effects filters, a little bit of adjusting is all that an image can handle before it crosses into the realm of unrealism. That can be fine for music videos and commercials. Narrative and documentary works need to stay within the parameters of reality, so small adjustments are necessary from these tools.

And when combined with the other plug-ins in the PHYX collection, Cleaner, Keyer and the new Stylist, PHYX is a good value for any editing system. PHYX doesn’t come close to the sheer volume of filters in the 100+ sets from Boris FX, for example, but I found the effects to be simple, stable and well-suited for the specific tasks for which they were designed.

PHYX’s Keyer filter has been well-regarded by professional editors for its ease of use, functionality and price. There’s no reason to doubt that PHYX Color would meet the expectations of editors as well.

FXFactory is as much a storefront for filters as an installer, where users can browse filters from several developers, install trial versions, and purchase the full versions. It’s a very simple app to install filters into all the relevant host applications. For example, it will install PHYX Color into Final Cut Pro, Final Cut Express, Apple Motion and Adobe After Effects all at once if you have all those apps.

PHYX Color from PHYXWare, $99. Check the PHYXware.com website for discount coupons on the product page.