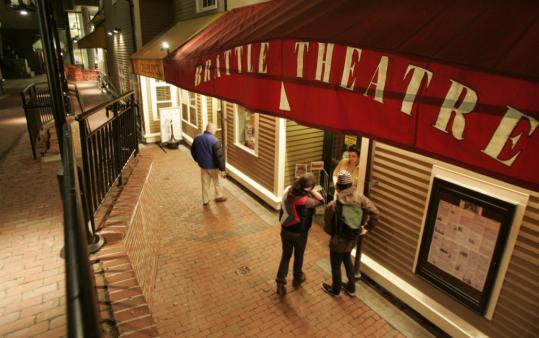 Mixing Old and New at The Brattle

Share
For film-goers looking to take a break from the latest multiplex explosion-fest, New England is home to an incredible array of independent theatres. This month, take a look at the Brattle Theatre in Cambridge. Is there an independent cinema near you that deserves some attention? Send your suggestions to news@newenglandfilm.com.

The next time you drop by a multiplex this winter, make a note of what movies are playing. Or what posters are hanging on the walls. Or what candy is at the concession stand. Chances are, they’re not that different from the last big theatre you visited. From city to city, or even state to state, big theatre chains are consistent, and that’s not always a bad thing. With more screens and bigger budgets, theatre chains have the resources to provide several screens, multiple showtimes and an exciting night at the movies.

Yet there is something special about local, independent cinemas, and luckily for New England audiences, we have a lot of them. From their film selections to their programs and events — even the snacks they offer — independent theaters have a kind of magic matched only by the movies they show. Their décor reflects the tastes of the individuals that work there, and so do the films that are carefully selected for screening. These choices also reflect the people who visit these theatres. Like local coffee shops and independent bookstores, these cinemas thrive in communities that are proud to have and support them. And they don’t all look the same.

What often distinguishes independent cinemas from larger chains is a distinct personality, and that’s certainly the case with the Brattle Theatre in Cambridge, Massachusetts. Located in Harvard Square’s historic Brattle Hall, the building began hosting dramatic productions in the late nineteenth century. In 1953, the Brattle began showing movies; today, it is operated by the non-profit Brattle Film Foundation. With only one screen, the theatre is a small one, but it gets plenty of use.

The Brattle Film Foundation celebrates a decade this year, and it works hard to support the theatre through memberships, fundraisers, and donations. The Foundation works to preserve films and make sure the Brattle screens what its website’s mission statement describes as “innovative and essential films.”

The theatre screens contemporary independent films while also keeping its eye on the past, offering newly released films alongside of classics from decades past. This month alone, the theatre presents the Bugs Bunny Film Festival, its picks for the best films of 2010 and the documentary William S. Burroughs: A Man Within. In keeping with the season, there’s also an Oscar party and Valentine’s Day screenings of Casablanca. (Humphrey Bogart occupies a special place at the Brattle: the theatre started screening his films for Harvard students during exams back in the 1950s. The Brattle’s website describes this as the “Bogie cult,” which eventually spread throughout the rest of the country.)

The theatre may be small, but not its events. This year the Brattle once again hosts the Boston Society of Film Critics Annual Awards and Screening. The ceremony includes a reception, film screening and special guest. In 2010 it was The Hurt Locker’s Jeremy Renner. This year it is Jeff Malmberg, director of this year’s BSFC Best Documentary winner Marwencol. Perhaps most obviously during awards season, independent theatres like the Brattle offer smaller, award-winning films that might not be at the top of the box office — or playing at bigger theatres.

Last summer, the Brattle began hosting the DocYard, a series of documentary screenings followed by filmmaker discussions. Sean Flynn of Boston’s Principle Pictures is one of the creators of the DocYard. For him, the series’ goal of growing “a vibrant, creative community around documentary filmmaking in Boston” made the Brattle a great choice: “The Brattle is an ideal venue for the series because it has held such a central place in Boston’s independent film community for decades. Most of our audience knows the theatre well, so there is a great sense of comfort and camaraderie at each screening,” he says.

The theatre got some press a few weeks ago when a patron smashed up the concession stand because a showing of The Sound of Music went out of focus. The flashier part of the story may have overshadowed the real surprise for readers, which is that there are theatres like the Brattle working hard to preserve and promote classic films like that 1965 musical as well as contemporary ones. In a community that houses one of the oldest and most prestigious universities in the world, maybe that shouldn’t come as a surprise. Yet the Brattle reaches further than Harvard. It’s a place for people who love movies, who love the experience of sitting in a hall as old as film itself, and who love knowing they’re with others who feel the same way.

As Brattle favorite Bogie might have said, it’s the stuff — for filmgoers, at least — that dreams are made of.

Learn more about the Brattle Theatre at their website, http://brattlefilm.org/, which features upcoming showtimes and events, information about the Brattle Film Foundation and a timeline of the theatre’s history.

Learn more about the Brattle Theatre at their website, http://brattlefilm.org/, which features upcoming showtimes and events, information about the Brattle Film Foundation and a timeline of the theatre’s history.