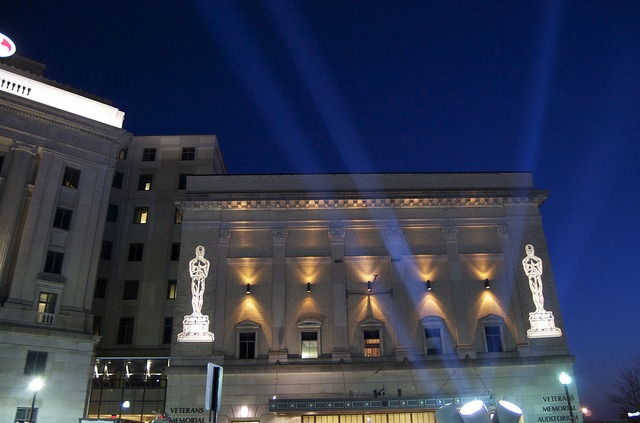 Share
From a romantic evening with Bogie and Bergman to a black-tie gala to celebrate the Academy Awards, there is plenty to do in New England this February. So brave the snow and cheer on the locally shot movies at the Oscars! Read on for opportunities, industry buzz and happenings in the local industry. To submit news, email news@newenglandfilm.com.

The FLICKERS: Rhode Island International Film Festival hosts Providence Oscar Night America on February 27th. Walk the red carpet, bid in the silent auction and watch the awards ceremony at the VMA Arts & Cultural Center (1 Avenue of the Arts in Providence.) The party starts at 6:30 pm; tickets are $50 and can be purchased online. Visit http://www.film-festival.org/OscarNightAmerica.php to learn more.

The Berkshire International Film Festival hosts an Academy Awards viewing party on February 27th at the Beacon Cinema (57 North St. in Pittsfield, MA). The event begins at 6:30 pm and includes red carpet, trivia, and an Anne Hathaway/James Franco look-alike contest. Tickets are $25 and can be purchased at http://www.biffma.com/events-detail.php?record=279.

The Brattle Theatre in Cambridge, Massachusetts hosts their annual Oscar party on February 27th. Check http://brattlefilm.org/2011/02/27/brattle-oscar-party/ for more updates and to purchase tickets.

Independent film Joy and the Apocalypse premieres February 5th at 3 pm at Red River Theatres in Concord, NH. Shot in Boston by an all New England based cast and crew, the film will also be airing on MyTV New England on February 12th. It is produced by Rock Your Head Productions and Fat Foot Films in collaboration with MyTV New England Studios. Visit http://www.joyandtheapocalypse.com/ to learn more.

Suffolk University’s Modern Theatre hosts a Dennis Lehane Retrospective February 14–17. Gone Baby Gone screens Monday night at 7 pm, Mystic River on Tuesday at 7 pm, and Shutter Island on Wednesday at 7 pm. On Thursday night at 7 pm, Lehane will drop by to discuss his work. Go to http://moderntheatre.com/cinema to reserve tickets.

Check out the Banff Mountain Film Festival as it continues its way through New England this month. Screenings will take place in Maine, New Hampshire, Massachusetts and Connecticut. Visit http://www.banffcentre.ca/mountainfestival/worldtour/listings/regions.aspx?cat=NA&location=us to find an event near you.

The Mahaiwe Performing Arts Center in Great Barrington, Massachusetts hosts a screening of White Irish Drinkers on February 5th at 7 pm. A Q&A with writer-director John Gray and actors Karen Allen and Peter Reigert will follow. Tickets are $17 for film and Q&A; $27 includes admission to the reception afterwards at Marilyn Kalish Studio (12 Railroad Street.) To purchase tickets, call (413) 528-0100. Learn more at http://www.mahaiwe.org/WebObjects/Merchantz.woa/wa/detail?
store=1000025&item=1033169.

We’ll always have Cambridge… Spend Valentine’s Day with Rick and Ilsa at the Brattle Theatre’s showings of Casablanca. The film screens February 13th and 14th. Visit http://brattlefilm.org/category/calendar-2/ to purchase tickets.

This year’s Academy Award nominations ( http://oscar.go.com/nominations) have a few Massachusetts connections, most notably in The Fighter and The Social Network. The Oscars air on February 27th; check out the Boston Globe’s analysis at http://www.boston.com/ae/movies/blog/2011/01/83d_academy_awa.html?p1=News_links.

The Coolidge Corner Theatre announced it has partnered with the Alfred P. Sloan Foundation to create a national Science on Screen initiative. Science on Screen, which features screenings and discussions with scientific experts in relevant fields, is in its seventh season at the Coolidge. The Sloan Foundation’s $150,000 grant will allow the Coolidge to share the program with other independent theatres around the country. Read more at http://www.coolidge.org/sloan.

Brattleboro, Vermont’s Women’s Film Festival is currently accepting submissions for its High School Video Contest. High school filmmakers are encouraged to create a two-minute film on the subject of “Woman.” The winners will have their films screened at the festival as well as other prizes. Visit http://www.womensfilmfestival.org/ for rules and guidelines. The deadline to submit is February 21st.

The Tenth Annual Boston Cinema Census is now accepting submissions. The festival honors local emerging filmmakers; the event will take place this spring at Cambridge’s Brattle Theatre. The deadline to apply is February 15th. Go to http://www.bostoncinemacensus.org/ for more information.

The Berkshire International Film Festival is currently accepting submissions for this summer’s festival. Filmmakers are encouraged to submit features, documentaries, and shorts. The submission deadline is March 1st. Visit http://www.biffma.com/index.php?catId=5 for full guidelines and to download a submission form.

Help a non-profit and enter the 2011 Rhode Island 7DAYPSA competition. Filmmakers who enter will be assigned a local non-profit organization and given seven days to write, shoot and edit a PSA. Registration deadline is March 4th; the competition takes place from March 30th to April 9th. Go to http://www.7daypsa.org/ to learn more.

The Nantucket Film Festival is currently accepting submissions. Regular submission deadline is March 7th, late submission is March 25th and the extended deadline is April 4th. Visit http://www.nantucketfilmfestival.org/ for submission fees and to download an application.