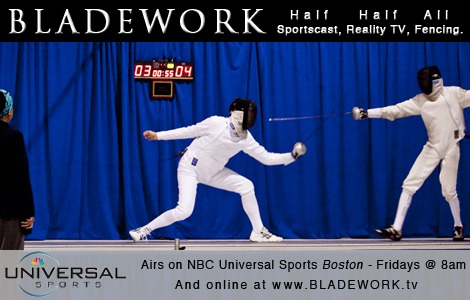 Bladework Slashes Its Way to the Small Screen

New Hampshire native Mike Grosse spent his years at the University of New Hampshire studying both cinema and fencing. In 2010, Grosse was working in independent TV production when he decided he wanted to produce a show of his own, and pitched a concept that combined both of his passions to Chris Murphy, NBC Universal Sports Boston Film and TV Development Executive. The idea was “simple,” said Grosse, “half sportscast, half reality TV, all fencing.”

Thus Bladework was born, the half-hour fencing series hosted by Nick Apostolides that premiered on November 26th. For the sportscast half of the show producer/director Grosse follows a tournament hosted by the Boston Fencing Club, covering “one bout from each weapon” each week. For the reality half of the show, Seacoast Fencing Club owner Chris Pullo “agreed to train our host for 12 weeks to get him ready to enter a beginner’s tournament for the final episode,” giving the audience “a storyline and personality to follow through the season.’

Warren J. Avery: How is Bladework different from other reality TV sports shows?

Mike Grosse: On a superficial level, Bladework is different from other reality TV sports shows because it is about fencing, which for one reason or another has never enjoyed the spotlight of the sports world. I am very confident that this will change when the 2012 Olympics come around, as the US has one of the strongest fencing teams in the world. In 2008, the US team won six Olympic medals in Beijing. On a deeper level, Bladework is different because it is really more of a travel show than a reality TV challenge… The challenge of completing 12 weeks of lessons and then competing is just as much of a means to provide our host with opportunities to explore the seemingly exotic land of Olympic-style fencing as it is a means of providing an engaging storyline for the audience to follow.

WA: Is this a show for beginners? More advanced swordsmen? Will you get into the ritual and history of the sport?

Grosse: This is a show for everybody. I would like it to be seen as a gateway to the sport. Historical information works its way into the broadcast each episode, but I have also scheduled several feature story episodes to air throughout the season. These will go into detail on special topics in fencing, such as wheelchair fencing. I would like to produce an episode about the sport’s history, and its relationship between stage, screen and strip. I would also like to air an episode about the current state of the sport, hopefully featuring several of the past Olympians from the sport I have met.

WA: Tell us more about host Nicholas Apostolides. Was it difficult to find an actor who was up to the athletic challenge?

Grosse: I was lucky with casting for Bladework. I had met Nick on the set of a short film in which he played a mercenary who had to demonstrate some light physical stunts amid small arms fire, so it was in the back of my mind that he had the mindset for combat sports, the physical fitness to pick up fencing quickly, and the willingness to risk… fighting people with swords.

WA: Is his background as a hiker and a runner important given the high athleticism of Olympic style fencing?

Grosse: I feel it is a common misconception about fencing… that you must be highly athletic to enjoy the sport. Fencing is really a sport for anybody from seven to 70. Being athletic helps with training and conditioning, but the fact is that every body type brings something to the table. Big and tall fencers might not be able to move quickly, but they compensate for this by having long reach that their opponents must be careful of. Very small fencers use their size to their advantage by being able to change directions quickly and get close to their opponents.

WA: What are some tips you can give us about filming sporting events?

Grosse: Filming sporting events is a unique challenge for any filmmaker. I could not imagine filming a sport in which I have not personally competed. At best, I would only be able to capture the action of a sport, but that is an entirely different thing than capturing the character of a sport. The goal should be to highlight the subtleties of a sport as it develops on its given stage while at the same time conveying the universal traits of competition that any audience can relate to.

Fencing has a long, rich history full of grace, drama, honor, and a thousand other qualities that distill the human experience down to two opponents drawing weapons to represent their causes. To capture this on film in a sport fencing event is difficult, but not impossible.

Having multiple camera angles is hugely beneficial, but having an intimate knowledge and passion for the sport you are filming is much more important because this knowledge will dictate where the cameras will be positioned to best bring out the subtleties of the sport. This is what separates documenting action from capturing the character of a sporting event. Every game has a personality and corresponding camera angles that make this personality look its best.

How would our impressions of the 2004 world series have been affected if there hadn’t been a camera on Curt Schilling’s bloody sock?

WA: As fencing is a lightning-fast sport, are there special challenges to filming something that fast-paced?

Grosse: The tip of the fencer’s foil is the second fastest moving object in the Olympic games. The only thing faster is the bullet from the shooter’s gun. This brings challenges not just to filming, but to editing as well. It’s comparatively easy to put five cameras on a fencing strip and capture a bout… Editing this footage in a way that makes sense to someone unfamiliar with the sport requires a lot of planning. I had to design a style guide, a unique editing workflow, and a series of easy-to-understand graphics.

It is one thing to watch Captain Jack Sparrow sword fight on the big screen, but the bladework of real fencing is far more complex than what we see in the movies. Stage fencing is typically choreographed to look good. Big actions, flashy maneuvers, constantly clashing blades are hallmarks of the stage and screen. In sport fencing, these are all undesirable actions. But my audience is accustomed to seeing these stage actions, so the special challenge of Bladework is to convey the idea that bladework on the strip is conversation.

So the action of the sport is very fast, but there is a lot of information to be read from the physical movements of the athletes. Good commentary is essential to interpret these actions. Thankfully, fencing simply looks cool no matter how you show it. There is a good reason why the sport is so closely tied to the stage and screen. Who doesn’t love a good sword fight?

WA: Do you think that Bladework will bring more people to the sport?

Grosse: I hope so. Fencing is a great sport whose numbers are growing. National champions are getting younger and fencers are starting at very early ages. Parents love the sport because it not only teaches physical fitness, but it develops confidence, concentration and reasoning skills as well. Anybody can learn at any age, and it does not cost nearly as much as people seem to think it does. It’s far less expensive than golf and many other sports and can be practiced year round. As far as adults getting into fencing… can you imagine a better stress reliever than poking someone with a sword and being saluted whether you win or lose?

For more information about the show, and to find out when to catch Bladework on air, visit www.bladework.tv

For more information about the show, and to find out when to catch Bladework on air, visit www.bladework.tv