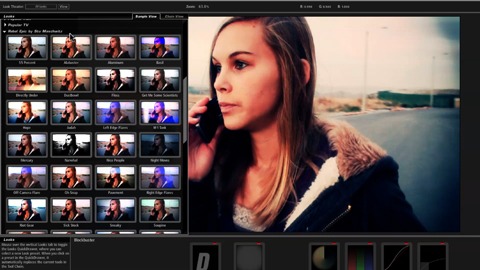 The Magic Bullet for Giving a Blockbuster Look to Your Film

Share
On the “cool scale” nothing comes close to the ease with which you can make your drab video look like a Hollywood blockbuster movie with the post-production software bundle Magic Bullet Suite 10.

Magic Bullet Suite 10 from Red Giant Software is a bundle of software products for post-production color grading and correction, enhancement of standard definition files to HD, noise reduction and format conversion. If you’re looking to give your videos the look of a Hollywood blockbuster without actually breaking the bank, this is a good place to start.

Included in the suite are Colorista II, a powerful color correction tool; Denoiser to clean up grainy or “noisy” video; Frames to easily convert interlaced video to progressive; Grinder to convert your files to various formats and frame rates; Instant HD to convert standard definition video to hi-def; Looks to quickly change the look of a clip to emulate popular movies and music video styles, along with its companion plug-in Photo Looks for still images; and Mojo for a quick application of a “film look” to a clip.

The Magic Bullet products are plug-ins that work within the top editing and effects programs such as Apple’s Final Cut Pro (FCP) and Motion, Adobe’s After Effects and Premiere, Sony Vegas and Avid Express.

Mojo works by adjusting the tint, saturation, gamma, contrast, shadows and highlights in the same way that a three-way color corrector might. With a deceptively simple looking set of sliders, the Mojo filter at first seems too simple. However, the limited set of sliders allows for an unlimited amount of adjustment and tuning to a clip’s color, making Mojo an infinitely powerful tool.

Simply applying Mojo’s default settings as a filter in Final Cut Pro gave my test clip a dramatic improvement. Mojo excels at combining tint, saturation, etc. to give stunning looks to a clip with minimal work. It could easily have no settings, be called “Film Look” and be worth its price.

Mojo also excels at isolating skin tones, allowing corrections to be made to the other parts of a scene while maintaining flesh tones. You can see examples of this style all over television these days, where the locations and costumes have a deep teal tint to them with super dark shadows, yet the actors’ faces remain radiantly golden. Mojo can achieve this look.

Colorista II is a full-fledged color correction filter that shares base functionality with other correctors, such as Apple’s built in three-way color corrector, the BorisFX color corrector, and Apple’s stand-alone Color application. But while Color required a “round trip” out of and back into Final Cut Pro, Colorista operates right within FCP to speed the workflow.

To put it on the continuum with the aforementioned products, Colorista’s functionality is far beyond FCP’s built in three-way color corrector, but short of the tracking and masking functionality of Apple’s node-based Color. But Colorista is also not as complicated as Color. So for jobs of easy to moderate complexity, Colorista is a great tool.

Colorista has a set of primary adjustments, as in Apple Color’s “rooms.” It also has one secondary set, where Apple Color allows for eight secondary color grades. Colorista also lacks any type of tracking feature. However, there are still a lot of powerful features in Colorista.

The simplified interface makes it easy to isolate a specific color in the shot and make fine adjustments to it. The keyer is simple to use and lets the colorist isolate one color in the clip, such as skin tone or an object, for separate correction apart from the overall changes that the primary knobs would make to the entire image. One can imagine the creative possibilities of this to invent special effects and wild looks for a music video or sci-fi movie.

Multiple instances of Colorista can be layered in the filters tab, providing a workaround for multiple secondary color grading needs.

Colorista would be my go-to tool for something like changing the color of a background element in the shot — to convert a yellow bus to green or to knock down the distracting color of clothing worn by someone in the background. As an everyday color correction tool, an editor could use this for a quicker solution than sending the timeline to the Color app, especially since Color will not work on clips with some filters applied or with speed changes.

Magic Bullet Looks is the star of the show. At least in terms of flash and wow, it has no equal.

Looks is a filter that combines multiple adjustments to a clip to create a look or style. This is sometimes referred to in the color world as a grade. Looks includes about 100 pre-built grades that can be applied to your clips with one click. It doesn’t get any faster than that.

All the parameters of these grades can be edited to fine tune something or as a starting point to create whole new looks. Or start from scratch and create your own color grades, and even save these custom looks and apply them to other clips with the same single click as the included presets.

Looks runs within its own application interface, Looks Builder, and uses a movie camera metaphor for organizing and naming the tools that combine to create the color grades. This is visually represented by five categories: a subject in front of the camera, the camera’s matte box, lens, film magazine and finally a post production area. For example, within the matte box category would be found adjustment tools that emulate filters and diffusers that a cameraman would use in a real matte box. In the lens section are the vignette tool and edge softening, which would occur in a real movie camera lens.

The camera section includes tools to emulate film stocks, shutter leaks, film grain and exposure. And in the post production section are tools for contrast, color warming or cooling, RGB curves and more. There are nearly a hundred tools in the application, and since these can be layered in various orders and configurations, there are literally an infinite number of color adjustments that can be made quickly and easily.

The preset looks, nearly 100 included, are categorized in terms of either the functionality or the origin of the source that the preset is trying to emulate. For example, there are sets of pre-built looks under categories such as diffusion, tint, basic and black & white, while there are others categorized under horror films, music videos, popular TV shows and popular movies.

Applying any one of these preset looks is as simple as clicking its icon. The look is instantly applied to the clip, and the tools that created the look are arranged along the bottom in the order they were applied along the movie camera metaphor workflow. Any and all of the parameters on all the tools can be edited to adjust the look. Saving the adjusted look is as easy as typing a new name for it and it’s saved in the Custom category along with all the rest.

Depending on the quality and lighting of your source footage, many of the pre-built looks can be overkill — over saturated, bright glows, too much contrast or tint. But since it’s easy to adjust the components that make up the look, it’s simple to throttle back some of those attributes into a pleasing and usable result.

The only significant drawback of the Magic Bullet Looks filter is its lack of support for live viewing on an external broadcast monitor fed through a breakout box. If your final output will only be seen on computer monitors, then viewing on a broadcast-calibrated monitor is not a concern. However, if you’ll be exporting files to view on DVDs, broadcast TV or to be projected in a theater, you won’t be able to get an accurate view of the final output while working in Looks.

Computer monitors are not accurate depictions of the actual colors in a clip. And once you export and watch your files on a TV, you will be unpleasantly surprised to find that colors, saturation, brightness and contrast do not look like what you thought they would when you worked on them on your computer screen.

Colorista II and Mojo do support previewing the clip on an external monitor, since they are active within the FCP or Premiere timeline. However, since Looks uses its own Looks Builder application interface within which to work, external monitors are not yet supported. You can learn to work around this issue, and, again, if your output is to be shown on computer screens only, this shouldn’t be of concern.

Red Giant offers a few add-on compilations of color grades for Magic Bullet Looks. For example, one is entirely devoted to looks that would be appropriate for wedding videographers. Another is available to give low-cost video productions the look of independent films, and yet another emulates the look of vintage movies.

“Stu Maschwitz’s Rebel Epic for Looks” is a bundle of 28 additional looks that were designed to mimic some of the stylized blockbuster movies, such as Mission Impossible, Saving Private Ryan and Transformers. Stu was the visual effects supervisor on Sin City, directs TV commercials and is the Magic Bullet Looks creative director. His set of pre-built looks are wild and stylized and yet, as with all the presets, easy to apply and adjust to suit your tastes.

I particularly liked the look Stu named “The” look, which emulates the recent trend to wash everything in a steely teal color with deep shadows, yet maintain a golden glow to skin tones. More than simply color adjustments, many of the Rebel Epic looks employ streaks of light crossing the screen, glowing diffusions of the highlights, desaturated values and dark shadows. Totally wrong for a wedding video perhaps, but stunning for an action or sci-fi film.

I have used Magic Bullet Looks extensively since receiving my review copy. I have created a visual style for some scenes I directed and used it to quickly fine tune some clips of a web series where I am the cinematographer to give them a bigger budget feel. I have even vastly improved some old VHS footage I shot years ago, making it not only acceptable, but also exciting.

Overall, Magic Bullet Looks is a great tool that I will reach for time and again. The entire bundle of products in the Magic Bullet Suite 10 is one of those “must haves” for professional editors, visual effects artists and independent filmmakers and videographers who want a budget-friendly way to add tremendous value to their footage.