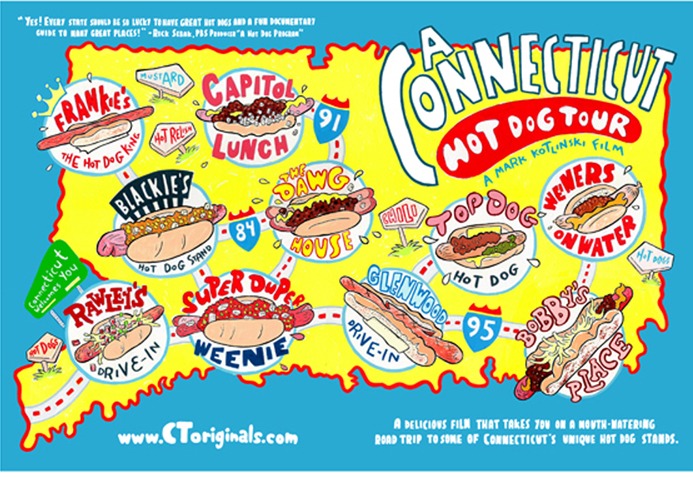 A Gastronomic Road Trip with ‘A Connecticut Hot Dog Tour’

Mark Kolinski is an independent filmmaker who has a knack for finding the off-beat and the interesting. He shares some of his insights on the advantages and challenges of making his film A Connecticut Hot Dog Tour, an epicurean odyssey filled with floating hot dog stands, celebrity cameos and fiercely guarded recipes handed down through generations.

Warren J. Avery: Do you see your film as a historical document in some respect?

Mark Kotlinski: Yes, for each story I felt it was important to include the evolution of each hot dog stand but at the same time not have it feel like a history lesson. Blackie’s Hot Dog Stand in Cheshire, CT actually started out as a gas station that also sold hot dogs topped with the family hot relish recipe. Soon they realized that their hot dogs were more popular than the gas, so they stopped selling gas. Today, over 80 years later, the same family owns the stand and they still make the relish the same way.

WA: How about a travel piece?

Kotlinski: Definitely it’s a food travel film. The film takes the viewer on a mouth-watering road trip to some of Connecticut’s distinctive hot dog stands to sample their house specialties, history and local hot dog culture.

WA: I know it is unfair to ask, but do you have a favorite?

Kotlinski: I actually don’t have one favorite; it depends on what I’m in the mood for. Some days I need a chili dog and others I need a hot relish fix. That’s what I like about Connecticut hot dog stands: there’s not one specific style, so they’re all pretty unique.

WA: I see you dedicated the film to your father, did you and your Dad have a favorite place?

Kotlinski: I’m Polish, so I grew up eating many different types of locally made Kielbasa (Polish Sausage) and hot dogs at home. One of my favorite brands was Martin Rosol’s, which is made in my hometown of New Britain, CT. In fact, a couple of the stands in my film also use the same brand of hot dog. My dad used to take me to Capitol Lunch. They’ve always used a Rosol’s dog, but served it topped with this very unique meat sauce. Back then they had the grill in the front window, so people passing by could see the hot dogs being grilled. That was the first stand I ever went to, so I definitely wanted to include it in the film.

WA: I was really amazed at the secrecy that surrounded a lot of the recipes. Were people actually that protective?

Kotlinski: A recipe is a trade secret, that’s what makes each place unique. Whether it was a chili or a relish, no one wanted to reveal the “secret recipe.” In fact, one of the stands wouldn’t even let us into the kitchen because they didn’t want us to show how the hot dogs were cooked. That is all a part of the documentary process — being able to improvise when things don’t go your way.

WA: What were some of the technical challenges of making this piece?

Kotlinski: The production team consisted of John Carluccio (videographer and co-producer) and myself. The small crew helped a lot when we were shooting in tight hot kitchens or inside of a roadside stand, during the lunch rush. Since there was no space or time to setup lights, we shot using only available light.

WA: Can you say more about the experience of making this film?

Kotlinski: The thing I’ll remember most about shooting this film is the role that weather played in the production. First it was the rain. Since we were only going to each stand once, we had to make sure that we scheduled shoots on clear days so we could shoot the exteriors. Unfortunately it rained so much that year that we constantly had to reschedule shoots, and eventually shot on some rainy days as well. When it wasn’t raining it was very hot and humid. That took its toll on everyone and the equipment because we were we shooting in some very hot kitchens, but we made the best of it and got it done.

WA: Any insight into making films in Connecticut?

Kotlinski: My advice is don’t let anything or anyone get in the way of you making your film. As I mentioned earlier the weather in Connecticut is definitely a major factor in productions. However it’s also one of the major advantages. Right now the fall foliage is at its peak. As I drove in today the vast array of colors was amazing. It’s also a perfect backdrop for a film.