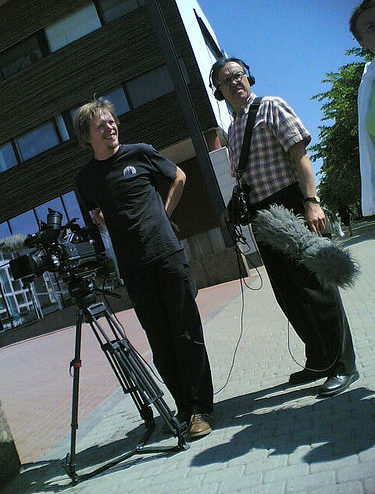 Should You Go to Film School?

Share
If you're considering a formal education in production, here's some advice on how to think through the decision.

Has every name filmmaker gone to film school? Of course not.

Do you have to go to film school to make it in the industry? Not at all.

Will a formal film school education up your chances? Unless you’re Jason Reitman or Sofia Coppola, absolutely.

No one enters the business because they think they’re going to make money hand over fist. You study film because nothing else will make you happy. Make no mistake, film school education or not, making films is gratifying, expressive, and a lot of fun. It’s also a lot of work. Some/most times unpaid work. If you can’t have a smile on your face the entire time, then for your own sake, consider a different line of work. You’re in it because you love it. Nothing else will do.

Before beginning my undergraduate film education, I had a discussion with a friend about the merits of formal instruction in film. ‘You know that old phrase, ‘Those who can, do. Those who can’t, teach’?’ she asked me. ‘In film school, the professors teach, but only because they’ve already done.’

To teach English, philosophy, math, science, you have to be on top of your game. You have to know your subject backward and forward. If a student comes to you with a query, you’d better have an answer.

In film (and indeed the arts at large), a professor can successfully answer a question with, ‘I don’t know. Why don’t you try it and see if it works?’

On a nearly universal basis, your instructors will have each achieved some level of success in the industry. Most still actively write, produce, direct, edit, and photograph. They are devoted to the craft, and they are at your university not because no one else is hiring or they have nothing better to do with their time (they’re artists. By definition, they have a lot to do). They’re there because they want to be. Granted, I’d hope that most of your professors stand before you because they want to. In film school, instead of producing, writing, or directing their own projects, they’re there not only because they have done, but because they want to encourage you to do, as well.

Filmmaking is cooperative and collaborative. Working with an instructor is only one piece of your education. Working in crews, learning to depend on other students, and trusting fellow collaborators with your original work takes trust, and a healthy willingness to let go. Creative writing, painting, sculpture, all can be solitary activities. Filmmaking, as a general rule, is not. Your classmates are not solely your classmates. They are your future colleagues. They are your connections. They are your network, and you graduate with a ready-made set of them.

Film school is expensive. You’ll spend a lot of time watching films. You’ll read some books. Can’t you do that on your own for a fraction of the price? Of course you can. So why drop mid-five-figures a year for four years? Why not put that toward a film? Indeed, some people have done.

The answer is at once multifaceted and very simple. It’s the difference between sitting down to write a screenplay, stepping on set to direct, putting your hands on an AVID machine, and thinking that you know what to do versus knowing what to do. At the end of the day, you’ve learned filmmaking from other films and books. But other films and books don’t make films. People do. Your professors do. Your classmates do. You do.

Bottom line, your greatest education will not come inside of a classroom. It will come behind a camera. A film school’s job is to ensure that you step on set with enough control and foresight to be that which actors and crew desire above all else: a confident filmmaker.

If you’re committed enough, you will find work. The head of a Boston-area film department once reassuringly told me that entertainment was America’s second-largest industry (the first being agriculture). Before I took the plunge, I wondered, ‘Tuition is so high, how can I afford to go into the arts?’ That’s a healthy thing to think. It means that you’re concerned about your future.

It’s also prudent to think, ‘Tuition is so high, can I afford to go into anything other than the arts? Should I be that lawyer/doctor/businessperson? Is it smart to spend my money on something that won’t exhilarate me for the rest of my life?’

Film school or not, if you’re an artist, you know the answer.