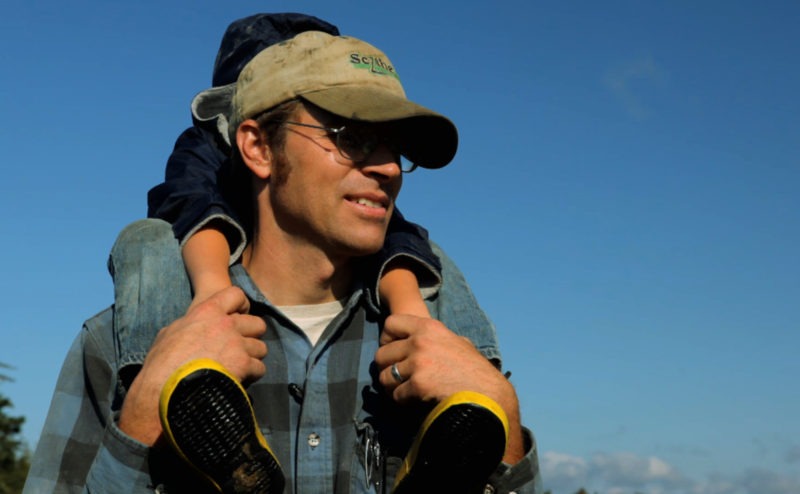 Meet the Filmmakers of ‘Meet Your Farmer’

Share
Writer-directors Jason Mann and Cecily Pingree share their thoughts on their documentaries 'Meet Your Farmer: Reed Farm' and 'Meet Your Farmer: Tide Mill Farm,' two in a series of eight short films about Maine farmers which are screening as part of the Online New England Film Festival.

Co-directors Cecily Pingree and Jason Mann live on the island of North Haven, Maine, where they run a small production company, Pull-Start Pictures. Pingree was born and raised on the island. Together they created a series of eight short documentaries about Maine farmers — two of which are screening this month as part of the Online New England Film Festival. Here, they talk about their inspiration for the series and how New Englanders can help sustain their local farms.

Alli Rock: What inspired you to start this project?

Cecily Pingree and Jason Mann: We were approached by a local organization, Maine Farmland Trust, that wanted to sponsor a film, but hadn’t really figured out what it would be. On discussing the project with them, we came to the conclusion that a prerequisite to supporting Maine Farmland Trust’s mission is understanding that farming is an ongoing and vital part of Maine’s economy.

In other words, nobody cares about preserving farmland for the future if they don’t know the farmers around them and understand what they do. So the project, a series of eight short films about different farms around the state of Maine, emerged from that discussion.

AR: What influence do you think your living in New England had on the Meet Your Farmer films?

Pingree & Mann: Like many residents of New England, including those who’ve grown up here and those, like me, who are from away, I have always taken for granted the landscape here: small towns surrounded by occasional fields and orchards, many small farms, and areas of wilderness.

But that landscape didn’t arise by accident. It’s the result of an economy that developed and adapted over centuries, but that has always had agriculture as one of the pillars of its foundation. And that landscape, which is so much a part of why I love living in Maine, could easily disappear over the next few decades if small-scale agriculture is no longer economically viable.

AR: What brought you to Tide Mill and Reed Farm in particular?

Pingree & Mann: Maine Farmland Trust helped us find all eight of the farmers we profiled, so I can’t say we selected them, or even knew them well at the outset. That said, the Bell family is like a hive of bees: their farm is constantly bustling and they work as hard as any people we’ve ever met. They give you the sense that nothing is impossible if you work hard enough at it.

Dan Tibbetts of Reed Farm was funny, engaging, and incredibly busy (we managed to visit him right in the middle of some mechanical difficulty in the barn, which he was dealing with more patiently than I would have). He talked very frankly with us about passing his farm down to one of his children, something that’s been increasingly difficult for farmers to do. I think that discussion was a real reminder that the larger story of preserving farming in New England is really just a collection of small stories: each farm family has to face that scenario at some point. And making sure that farming isn’t just appealing, but is economically viable as a career for the next generation of farmers, is a challenge we, as consumers and citizens, need to take on.

AR: What do you think you’ve learned through working on this project?

Pingree & Mann: The biggest thing I’ve learned is this: It wouldn’t take much for consumers in New England to make a big, positive impact on the farms in their region.

A good example is Maine’s Own Organic Milk, or MOO Milk, a company formed by a group of Maine dairy farmers, including Aaron & Carly of Tide Mill Farm (MOO Milk is the subject of a feature-length documentary Cecily and I are making right now). If only a small fraction of the consumers in Maine and New Hampshire started buying MOO Milk, it would keep eight Maine farms in business, not to mention the small Maine businesses that haul the milk and bottle it. And it wouldn’t just keep them afloat, it would support a business model that is designed with their long-term sustainability in mind. It could make passing down a family dairy farm a possibility for many more farms. And it could serve as a model for many other kinds of agriculture.

But it all comes down to us: the consumers… The bottom line is that a few people doing everything perfectly (buying all of their produce locally or their meat from a nearby farm) won’t make a big difference in the grand scheme of things. But if everyone does just a little bit, like buying MOO Milk or supporting a local vegetable farm once a week, the results can be astounding. But it’s all up to us.