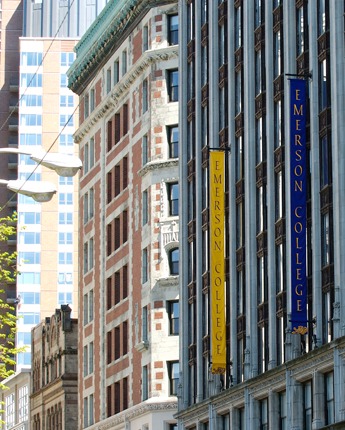 In part one of a series, NewEnglandFilm.com writer Maddy Kadish investigates the allure of attending film school in New England.

The film industry in Boston has a different vibe and energy than that of New York City or Los Angeles. NewEnglandfilm.com investigates two of Boston’s top film schools for some of the reasons behind film students’ choice to study in New England: Boston University’s Film and Television Program and Emerson College.

NewEnglandFilm.com talked with three film professionals in Boston. Trends that jump out are students’ desire to be academically challenged and the opportunity to simply focus on their craft. This may reveal that Boston’s brainiac stereotype extends into filmmaking as well.

Boston University (BU) offers undergraduate and graduate programs in film and television within its College of Communications (COM). Options for both graduate students and undergraduates at COM include student-run television programming, radio stations, and a video production company, Hothouse Productions, which connects students with clients in the area. The Redstone Festival, sponsored by Sumner Redstone, Chairman of VIACOM, showcases student work in Boston, NY, and LA.

Graduate programs require a thesis project. BU offers semester and summer options, as well as opportunities to study abroad. Its Los Angeles program includes an internship and courses in communication and society, careers in Hollywood, and evaluating and developing film and television projects in LA. Students hear from professionals in the industry, through classes and speaker series.

Paul Villanova will be attending Boston University’s Film & Television Program in the College of Communication for his Masters of Fine Arts degree in September 2010, a 2-year degree. He chose a program in Boston for personal reasons. “I love shooting around New England. It has a unique look and feel. I grew up around here and consider it home.”

He graduated with a Bachelors of Science from Ithaca College in 2005, where he studied video and television production. Then, he worked for five years as producer at VPG Integrated Media, an interactive media company, specializing in educational media.

According to the BU website, the total student enrollment for the university (as of March 2010) is 31,960, coming from over 100 countries and all 50 states. According to The Princeton Review’s website, BU’s student to faculty ratio is 14:1 and 77% of students are out of state while 8.62% of students are international. US News and World Report identifies BU’s acceptance rate for Fall 2009 as 54%. BU’s overall ranking in the 2011 edition of Best Colleges is National Universities is 56. (these statistics includes all BU schools, not just the film program).

Villanova cites BU’s large and strong alumni network and stellar faculty as a plus and, being a large program, there is the opportunity for easy access to equipment for students.

Villanova says the program in LA wasn’t a selling point for him and identifies his goal of developing his skills as a filmmaker as his main reason behind his choice to study in Boston. “I did a semester in LA in college and although I’m glad I did it, at this point I’m most concerned of making something of great value out of my thesis project. So it (LA) isn’t as important to me now; it’s more what I’m going to do with the resources that I have, wherever I’m at. I’m going there to challenge myself as an artist.”

According to their website, Emerson College is the nation’s only four-year college devoted exclusively to the study of communication and performing arts. The film program is part of the Department of Visual and Media Arts (VMA) which awards BA, BFA, and MFA degrees.

Emerson offers study abroad options and an LA program for the summer or a semester. Through the LA program, founded on the principles of experiential learning, students intern and take courses to integrate theory and practice.

As the Program Coordinator of Emerson’s Visual and Media Arts Department, Anna Feder coordinates student internships, assists students with festival submissions, updates alumni records, and organizes the Emerson Film and Video Festival in LA. In addition to her work at Emerson, Feder is also the Executive Director of the Boston Underground Film Festival.

The LA internships are part of the LA Program office, but Feder coordinates the Boston and international internships. “I hold meetings with students over the phone or on Skype. Sometime it’s international students working in their home countries,” Feder says.

Emerson’s Film Festival in LA shows a selection of student work to alumni and fellow filmmakers in LA. This year the festival screened nine works by current Emerson students and recent graduates and provides opportunities to network.

She says, “there is no shortage of opportunities for students here to make connections. The faculty and staff are working professionals in the industry. Emerson alums and faculty are eager to hire Emerson students. I have Emerson interns working on my festivals!”

According to Emerson’s website, the current total student enrollment is 4,290 from 45 states and 50 countries. The Princeton Review’s site notes a 13:1 student to faculty ratio (although Emerson’s site says 14:1) and calls it “one of the premier colleges in the US for the study of communications and the arts.” It identifies 75% of students as of out of state and 2.7% international. US News and World Report writes that for fall 2009, Emerson’s acceptance rate was 42%. Emerson College’s ranking in the 2011 edition of Best Colleges (regional universities – north) is 14.

Filmmaker Alesha Gunn is from Boston and earned her Master of Arts at Emerson in 2007. Emerson has since phased out the 2-year MA program in favor of a 3-year MFA program. “As a student, I needed to develop my craft, not try to climb some ladder,” says Gunn of her choice in graduate programs. “You have to create your own opportunities, but I think it’s better in the long run. It helped me grow as an artist.”

Gunn credits Emerson with teaching her how to accept constructive criticism as an artist and to view her work more objectively. “As artists, we become attached to our work and take things personally. But, over time, I saw the value of accepting someone else’s opinion as a way to improve your work. My favorite professor was very critical of my work at first and it was hard for me. We butted heads a lot. But he wound up being my favorite because he challenged me. He helped me improve in ways that I never would have otherwise.”

Feder sees plenty of opportunity for film students studying in Boston. “The students have so much energy. They are doing projects for classes and outside of class, through student organizations and on their own.”

Although she enthusiastically would bet on her students’ hard work and creativity, Feder wasn’t sold on any trends among them, unscientific or otherwise. “There’s a wide range of interests. Some are very LA focused. There are students who want to be artists and educators, mostly the MFA students. There are students interested in experimental films. Some want a stable job around industrials or weddings.”

Feder says that the tax credits not only brought more production to the area, but has helped local production companies. “Boston has a growing film base and local companies take advantage of interns. There is so much competition in NY and LA to get on-set experience and to do the same things that these students are already doing here. I am inspired by the students here. I learn from them every day.”