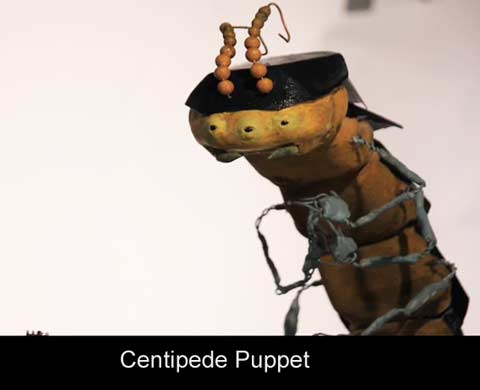 Big Winner: Martha Grant on her Animation ‘Win Big, Have It All’

Share
Filmmaker Martha Grant puts it all on the line at the Rhode Island International Film Festival with her film Win Big, Have It All.

Martha Grant is a recent graduate from the film/animation/video department at the Rhode Island School of Design (RISD) with a thought-provoking and twisted take on fantasy filmmaking. In Win Big, Have It All, Grant creates a world of card playing insects with a penchant for risking life and limb.

Warren J. Avery: Win Big is stop-motion animation film set in the ruins of a casino in which a fly and a centipede play poker. Is this a cautionary tale about gambling?

Martha Grant: Yes, on the surface, this is a film about how the Fly will risk everything to win and the addiction these characters have to betting. However, it’s also a story about the evolution of friendship.
WA: What inspired the story behind Win Big?

Grant: To be honest, this film started as a technical experiment that later evolved into a character-driven narrative. Initially, I concentrated on the challenge of building and animating huge mutant bugs in a post apocalyptic world; the Fly and Centipede were just two of many characters. However, as I developed the script, the environment became less important, and a story grew based on the Fly and Centipede’s competition, greed and weird love for each other.

WA: Animators always say that they can tell bolder stories, ‘get away with more,’ do you feel like you did this with Win Big?

Grant: While I got away with a lot of fantasy having the personified bugs take themselves apart, I think any medium is capable of expressing bold and fantastic stories. To me, what makes a film memorable or meaningful is actually a simple, universal storyline.

WA: At one point the fly goes all in by removing and betting with his legs and head. Do you feel like you have to ‘put it all on the line’ in pursuing a career in film?

Grant: I’m living with law students now, and to my initial surprise, they have a lot of the same conversations about their careers as I had about pursuing a career in art. It seems like you have to “put it all on the line” to do anything you believe in or are really excited about, film, art or otherwise.
WA: What equipment did you use in putting this film together?

Grant: I used a Canon 50D camera with an adapter to attach a Nikon lens. I captured images through Dragon, edited and timed in Final Cut, recorded and edited sound in ProTools and then put everything together in AfterEffects. RISD provided me with a great technical setup and valuable support.

WA: How did you get started in animation?
Grant: I’m still getting started! I wasn’t really serious about film or animation until an elective intro class at RISD introduced me to the work done at the National Film Board of Canada, and to filmmakers like Priit Parn, Sally Cruikshank, Suzie Templeton, Svankmajer, Roy Andersson and others. I had never seen work like theirs and it gave me a whole new perspective on the meaning and making of movies that I wanted to explore. A year later, I fell in love with the technique and materiality of stop motion and started to be more focused on building technical animation skills.

WA: Did you learn anything new about animation in making this film?

Grant: This was my first solo film so I learned things all the way through. My RISD teachers taught me a great deal about storytelling and self-discipline. My classmates taught me the value of asking for and receiving feedback. However, stop motion puppet construction was probably the area [where] I experimented and learned the most. In 2009, I was lucky enough to intern at Cuppa Coffee Animation in Toronto where the armature maker, Keary Scanlon, generously taught me construction of aluminum block armatures and ball and socket joint basics. The book Stop Motion Armature Machining by Tom Brierton added to that technical knowledge. There are still lots of things I have yet to figure out but it was a great start…

WA: I have to ask, what is your advice for people interested in making animation?

Grant: I feel like I am still a beginner. I approach being an animator by practicing both animating and writing. I also think that it is important to be exposed to how other people approach storytelling, in experimental work, narrative work, commercials, music videos, older classics and new and international work at festivals…

WA: Your film is in a festival that has been ranked in the top 12 in the nation, what are you planning to do next?

Grant: It is such an honor to have Win Big included in the RIIFF lineup! Looking ahead, I am excited to use the lessons I learned from making Win Big in another film. In addition, now that I’ve graduated, I’m also looking forward to acquiring skills from working in the industry. I’m thrilled to be starting a job with Laika soon that I expect will lead to another series of discoveries about the practice and process of filmmaking.

Martha Grant will be screening her animated short Win Big, Have It All at the 14th Annual Flickers: Rhode Island International Film Festival (RIIFF) which will be screening films all over Providence from August 10-15, 2010. Grant’s animation will screen with a number of other shorts at the VMA Arts and Cultural Center on August 12th at noon. For more information on the festival, visit http://www.film-festival.org/. For more information about the film, visit http://marthagrant.com/

Martha Grant will be screening her animated short Win Big, Have It All at the 14th Annual Flickers: Rhode Island International Film Festival (RIIFF) which will be screening films all over Providence from August 10-15, 2010. Grant’s animation will screen with a number of other shorts at the VMA Arts and Cultural Center on August 12th at noon. For more information on the festival, visit http://www.film-festival.org/. For more information about the film, visit http://marthagrant.com/