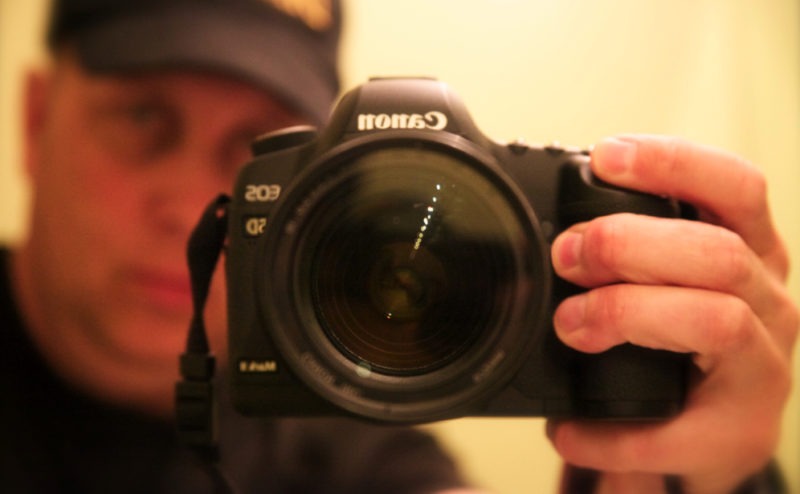 DSLRs Come into Their Own: Viva la Revolución!

Share
Shooting video on a still camera? Peter Bohush tells us why this is no longer as ridiculous as it sounds - and how it can revolutionize the way you make your film.

In 1998 a major revolution in independent filmmaking occurred with the concurrent introduction of miniDV tape digital camcorders and computer-based editing software. For the first time, filmmakers with low or no budgets could shoot and edit movies in “near-broadcast” quality, right from their home computers.

Some even made it to the big screen, such as The Cruise (Bennet Miller), The Last Broadcast (Lance Weiler), Full Frontal (Steven Soderbergh), Chuck and Buck (Miguel Arteta), and Bamboozled (Spike Lee). The Blair Witch Project was shot on even older technology, Hi-8 analog video.

I jumped on this bandwagon myself, using a small Sony TRV-900 miniDV camcorder to shoot my movie Geezers on the streets of Boston and Worcester and the Mass Pike in between.

And since the data was recorded digitally, even today I can transfer that footage to my computer without any loss of image quality. The Final Cut Pro software I used to edit Geezers is still in use today, although with significantly more power and features.

The miniDV days were exciting, but history may show them as merely the opening act to today’s revolution: the DSLR movie.

DSLR stands for Digital Single Lens Reflex, where the SLR portion indicates that the photographer will see the exact image that will expose onto the film, as opposed to the tiny offset viewfinder in cheap instamatics, and the D meaning the image records onto digital media instead of film.

A few manufacturers added video recording capabilities to their DSLR still cameras. Like the video offered in cell phones and consumer still cameras, the DSLR video was intended to take short videos to complement the stills, perhaps to document the scene for the photographer or maybe shoot short B-roll clips for TV news.

Most of the moviemaking crowd chortled at the notion of still cameras shooting video. I mean, even the mental image of someone calling “Action!” from behind a still camera seemed absurd.

However, a couple of people quickly noticed that the video recorded by the DSLRs looked, well, amazing. True, the cameras were awkward to use in a film-type environment, and there are limitations, but the images were better than almost anything made on a camcorder, and comparable to the $100,000 industry-leading Red One.

How is that possible?

Exposure relates to the amount of light entering the camera to record the image. Video camcorders often have a gain or exposure control to open or close the iris, similar to the f/stop ring on a still camera lens, allowing more or less light to hit the sensor. But adjusting the light to record a suitable image is only part of exposure control. The size of the lens opening affects the area of focus, too.

Focal length relates to the type of lenses used, such as a wide angle, telephoto, zoom, etc., and the qualities of each. Most camcorders have one lens with a zoom. But zooming in to get a close shot results in a different image than using a wider lens (shorter focal length) and moving the camera closer to the subject. The difference can be seen by the relationship between the subject and the background.

Zooming in makes the background appear to be bigger and closer to the main subject, in effect squashing the depth of the image. A wide angle appears to push the background away. Neither is right or wrong, it’s an artistic choice. However, camcorders were designed in a way to keep both the foreground and background in focus throughout the spectrum from wide angle to zoomed in, as opposed to most film or SLR lenses, which display different characteristics.
As digital video quality improved from miniDV through various incarnations and up to high definition, one thing was missing from the imagery — control over depth of field.

Depth of field relates to the zone in front of the camera where the image will be in focus, while everything else will be soft or out of focus. That’s how most people can tell the difference between film and video (later called simply digital, since there is no video tape involved).

With video/digital, the camcorder lenses were designed to bring everything into focus, or as much as possible, to accommodate the average consumer who doesn’t want to be bothered with focusing every shot. It’s great for shooting soccer games, kids opening presents, and the like. But it will hardly look like Lawrence of Arabia.

Using a still camera lens, though, allows the photographer to play with that zone of focus to control the depth of field, bringing the main subject into focus and blurring out the background and/or foreground as desired.

This is a crucial element in the “film look” so desired by moviemakers.

Focus control is only useful if the image itself will still look good when blown up to display on a big TV or movie screen, and that brings us to sensor size.

Don’t let them kid you when they say size doesn’t matter. In moviemaking at least, it does.

Most video camcorders, even the few that have interchangeable lenses that can provide depth of field and focal length control, record onto relatively tiny sensors. They cram lots of data onto little chips, and they selectively throw out some important data.

I have a $7,000 camcorder that records through a giant lens onto a two-thirds inch sensor, or about the size of the fingernail on my thumb. Many consumer camcorders record onto one-third inch chips, or about the size of my pinky fingernail. To do this they have to cheat and leave out some color information in a way that tricks the human eye — to a point.

The 1/3-inch sensor on a consumer camcorder records data onto a chip about 17 square millimeters. Full-frame DSLRs, by contrast, record onto sensors roughly the same size as a frame of 35mm film. That’s around 864 square millimeters, or about 50 times larger than the little camcorder.

Bigger sensor area means bigger pixels and more data recorded, and that means a better picture, as long as the camera software also records the color information of every pixel. Most DSLRs still cheat on the color, but unless the image will be manipulated in a computer for green screen effects or other CGI the data deficiencies won’t really be seen by the human eye.

So the revolution goes like this: make a camera with a huge image sensor and great low-light capabilities. Pair it up with great film lenses. Program it to record video at 24 frames per second (same as film). Turn it loose for one-tenth the price of its established rival, and let the moviemaking begin.

For a great example of what the new DSLR cameras can do, check out Vincent Laforet’s one-night shoot with the Canon 5D Mark II entitled Reverie.