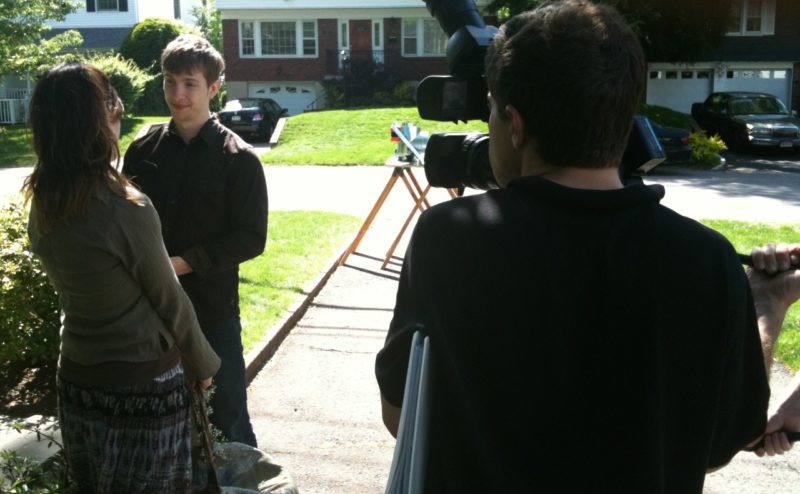 Share
My recent film shoot, a three-day affair for a 20-minute comedy, taught me the value of running a tight ship, as well as a few other things.

My latest cinematic endeavor took place this past month. As producer-writer-director, my hand was in almost every pot, above and below the line. As I tell my film students, true education comes not in the classroom, but on an actual set. The difference between a good director and a great one is not memorization of tips and tricks, but rather how he or she deals with the unexpected. As someone who aspires to be a great director, I learned quite a bit this time around.

I rented out a space in midtown Manhattan for two days, and had an actor friend read opposite those auditioning. There were four roles in this film (two male, two female) and I had received upwards of 120 headshots and resumes. I wanted to give each actor 20 minutes to audition, which allowed me space for about 30 people. All things being equal, how does one narrow it down, if everyone has similar experience and a passable look?

One thing that was invaluable for call-ins was a video reel. If an actor had a link to previous work, then it made a big difference in who I decided to invite for an audition. Tell your actor friends to put one of these together if they don’t have it already. I was surprised by how many actors did not have one, especially today.

Renting space for auditions is not a pricey affair. There are plenty of studios in Manhattan (and, for that matter, urban centers in New England) that will work with you and your needs. If you want to book out a block of time, some studios will even negotiate a package deal. I was able to find a centrally-located space at $15 an hour.

Don’t forget to inform auditioning actors at the audition (that’s before you cast them) if you will require any scenes of undress. I was sure to do this, but was surprised when multiple actors informed me that they have been cast in films in which the filmmakers did not inform them of such before casting. That’s taking advantage of your actors, and that’s not cool.

It was important to me to thank my cast after every day of shooting, and at times I would go so far as to thank them after a great take. I reimbursed their travel expenses (don’t forget to save your receipts!) and paid for meals. It’s important to respect the time and effort that they put into the production, but respect is a two-way street. It’s important, when casting, to discover actors who can not only take direction, but those who can also respect where you’re coming from as a director. True, actors put in long days. However, your day behind the camera is just as long, and in many cases, longer.

My cast looked for feedback in different ways. One asked me for notes immediately after each take. The actors with whom I worked were professional, so most of their performances met or exceeded expectations. Don’t be afraid to ask them to refine their performance in particular ways, however, in order to obtain what you want. Be sure that you explain your reasoning for asking them to change things around.

Clint Eastwood’s fabled directing style is to have the actors perform the scene once, however they see fit. He then walks the actors through the scene, explaining in detail what he wants each one to change, and then shoots it a second time. Supposedly, he rarely goes over two takes. I averaged about three to four takes per shot. I like acquiring at least two ‘perfect’ takes before moving on.

Also, I found that working with actors who have improvisational experience (one of them had worked with The Upright Citizens Brigade) was a major boon. These are actors who not only exist inside the heads of the characters, but also raid these heads for answers to questions such as, ‘What would so-and-so do in this situation?’ ‘How would he react if she said it to him this way instead of that way?’ Actors who respond to your direction are desirable; actors who also have imaginations of their own and utilize them are even more so.

A small army of crew was invaluable. Having enough production assistants on hand to set up equipment, drive actors to a location, or even pick up lunch made the difference between sticking to the schedule and running late. I’m extremely grateful to everyone who helped out, and I was sure to let them know.

Make sure that your crew knows to remain silent from ‘Action’ to ‘Cut.’ Second nature, yes, but always a good thing to remind them.

I was lucky to work with a talented cinematographer. Any opportunity you have as a director to work with your actors, you should take. It’s the cinematographer’s job to boss the crew, and the crew needs to know this. Directors, don’t forget to glance in the viewfinder just before the camera rolls.

Having a good assistant director will also save you boatloads of time. Make sure that you have someone who can take charge and push through any bottleneck. Additionally, shooting out of sequence with respect to location considerations will also help you stay on target.

My script supervisor kept a close eye on continuity and wardrobe. She saved the production more than once, and it was good to have her keeping an eye on things. Was he wearing the green shirt or the camel-colored shirt on day one? Which skirt did she have on in that scene?

Ultimately, keep a sense of humor, but don’t lose sight of your shooting goals. It’s not a question of if you’re going to do it. The question is how.