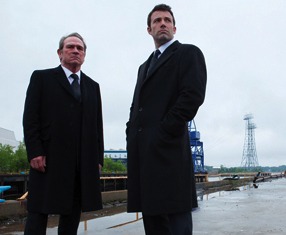 Share
NewEnglandFilm.com correspondent Maddy Kadish hits the Sundance Film Festival and reports back on the scene, the crowds and the films.

“It’s a lot less crowded this year,” the waitress at Main Street Deli in Park City, Utah told me as she rang up my coffee. She was referring to opening weekend for the Sundance and Slamdance film festivals in Park City, Utah, January 2010.

Park City, this January, may have seemed less crowded to some in this year’s downturned economy, but it is still the country’s top spot for independent film. The 2010 Sundance Film Festival includes some new additions this year and experienced an increase number of film submissions from last year with 3,724 feature length films and 6,092 shorts submitted.

The film industry converged on Park City beginning on Sundance’s opening night, Thursday, January 21st, through closing night on Friday, January 29th. The 2010 Sundance Film Festival credentials became the new fashion must-have around Park City seen in restaurants, bars, the airport, even at the Slamdance Film Festival, which runs concurrently at Treasure Mountain Inn at the end of Main Street in Park City.

Park City, home to three major ski areas, transforms from a casual ski town to a filmgoer’s paradise overnight. The festival temporarily displaces many local art galleries and stores on Main Street as Sundance-related businesses, such as the Sundance Channel, cover over the original signs with makeshift ones.

I was fortunate to have a diverse Sundance experience filled with drama, comedy, documentaries, shorts, animation, and alternative films (the original indie experience), all with packed crowds and full houses. I purchased some advance tickets, waitlisted others, and generally soaked up the scene.

On Saturday morning, January 23rd, my friend and I woke up early to join the waitlist line at 7:30 am for happythankyoumoreplease from Josh Radnor (best known for his role as Ted Mosby on the CBS sitcom, How I Met Your Mother), which began at 8:30 am. For those who don’t have tickets or an “in,” the waitlist has become a Sundance tradition. Film-goers, unable to get tickets to more popular films, can line up at the theatre, beginning two hours before a film, to receive a waitlist number. Then they must return to the theatre 30 minutes before the film and line up numerically to purchase tickets, on a space-available basis.

happythankyoumoreplease is a romantic comedy about six New Yorkers navigating dating, jobs, and relationships. I walked up to the waitlist line just as the shuttle had let out a pack of stampeding people, running to the line. My friend and I received numbers 70 and 71 and were some of the last people to enter the theatre. A kind usher whisked us into the fourth row, next to some family members of the cast. We got an up-close view of the cast’s Q&A session after the screening. The early morning, the wait and the rush were well worth it. I found the film to be funny and engaging.

Sunday, January 24th included another waitlist film, the documentary, Bhutto, about the life of Pakistan Prime Minister Benazir Bhutto who was assassinated in 2007. We queued at 9:30 am for the 11:30 am film and were among the 50 waitlisters who got into the film. I found Bhutto to be a powerful and passionate film. The story unfolds through interviews, news footage, speeches, and clear and beautiful graphics of maps and charts that support the details. This was a topic that I knew little about, but came away feeling informed and fired-up.

Other films that I took in, playing in Park City and Salt Lake City, included shorts, from Spike Jonze (I Am Here), Rory Kennedy (The Fence), animations, and a documentary from Ireland.

Sundance included some new additions in 2010 reflective of the changing times both financially and technological and to expand audiences. These include Next, a new festival category, highlighting innovative work in low- and no-budget filmmaking, the New Frontier, a program celebrating experimentation and the convergence of film and art, and Sundance Film USA, one night of 2010 Sundance films and dialogue at theatres around the country, including Coolidge Corner Theatre.

Next, presented by YouTube, includes low- and no- budget films in Sundance’s screenings. Three of the films in the Next category will be available for rental from at YouTube Movies until January 31, 2010.

The End – a video installation, from Ragnar Kjartansson of Iceland, of five different locations in the Canadian Rocky Mountains each with musicians performing. The five play together in a surround-sound concert accompanied with fantastic background views.

Actor Joseph Gordon-Levitt (from (500) Days of Summer) discussed his new venture, hitRECord.org, a collaborative, crowd-sourcing production company that’s part media workshop, part social network, and part art exhibition. Artists and filmmakers can contribute scripts, photos, videos, and other media for others to use as a base for their work. For instance, an animator can animate photos posted to the site, by another artist.

Gordon-Levitt cohesively presented a lot of complex information in his easy-going style. He led the audience through a live version of his online concept, as we recorded sound effects and voice-overs for potential productions. He selected a French actor from the audience to be a voice over for an animation of a rat and a cameraman. “But I am French, my English isn’t so great,” protested the actor. “That’s okay. You can play the rat,” laughed Gordon-Levitt. He invited the whole audience up to play background characters in a short scene from a music video he is creating. He also screened works-in progress posted on hitRECord.org.

In the other new area of the festival, Sundance Films USA, Sundance will dispatch eight filmmakers, on Thursday, January 28th, from the film festival to eight cities across the country to show and discuss their films with audiences. The Coolidge Corner Theatre showed The Company Men, written and directed by John Wells and filmed on location in North Boston. The Company Men is about three company men attempting to survive a round of corporate downsizing while trying to fend off its effects on their families and identities. The cast includes Ben Affleck, Kevin Costner, Maria Bello, Tommy Lee Jones, Chris Cooper, and Rosemarie DeWitt.

Here are some tips for a great Sundance experience: